Gate.io Blog What Is the LUNC Tax Burning Proposal?

What Is the LUNC Tax Burning Proposal? 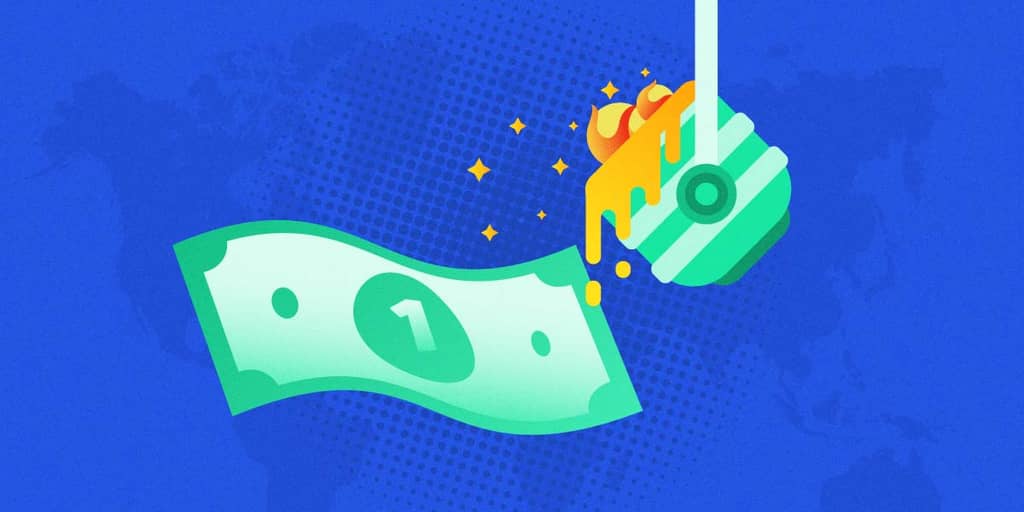 🔹 1.2% tax burning is difficult to promote in centralized exchanges.

🔹 Can LUNC holders make profits based on "burning"?

The surge adverse the long-cycle bear market can always inspire people. The recent proposal of Terra Classic tax burning caused a sensation in the community and pushed LUNC to the price peak at one stroke.

The surge adverse the market originated from a generous staking mechanism launched by Terra Classic on August 27. Users can obtain an annual interest rate of 37.8% if they entrust the LUNC to the validator. Within 24 hours after the release of this mechanism, LUNCs exceeding 1% of the supply of LUNCs have been staked. In addition, the tax burning proposal adds another catalyst to the rising momentum of LUNC.


What Is Terra Classic Tax Burning?

According to Edward Kim's proposal, the tax will be levied on all on-chain transactions. However, since the centralized exchange (CEX) usually settles transactions off the chain, it is almost impossible to levy a tax on transactions in the centralized exchange. The exchange needs to actively support the tax collection before the proposal can be implemented in transactions in the exchange. Presently, Gate.io has issued an announcement supporting the Terra Classic on-chain transfer burning proposal, for example, the 1.2% tax proposal of LUNC has been supported by the community, and Gate.io will execute the tax burning in the withdrawal of LUNC and USTC and burn it.

The burning tax proposal makes many people think that it may be the decisive moment for LUNC. The idea behind it is to reduce the supply of LUNC so as to avoid the slump of LUNC price caused by oversupply. However, the disadvantages are also very obvious. The burning tax makes the transactions on the Terra Classic chain more expensive.

The implementation of the burning tax proposal is expected to be between September 13 and September 20, which coincides with the Ethereum Merge. When it is finally successfully implemented, the Terra Classic community believes that LUNC may once again usher in a boom with the help of market concerns.

With the effective help of the burning tax proposal, LUNC has started an upward trend since August 23. According to Santiment, while the price soared, the trading volume of LUNC also reached a peak on September 1. Its trading volume within the whole network reached $1.5 billion, with a 24-hour increase of 85.1%. 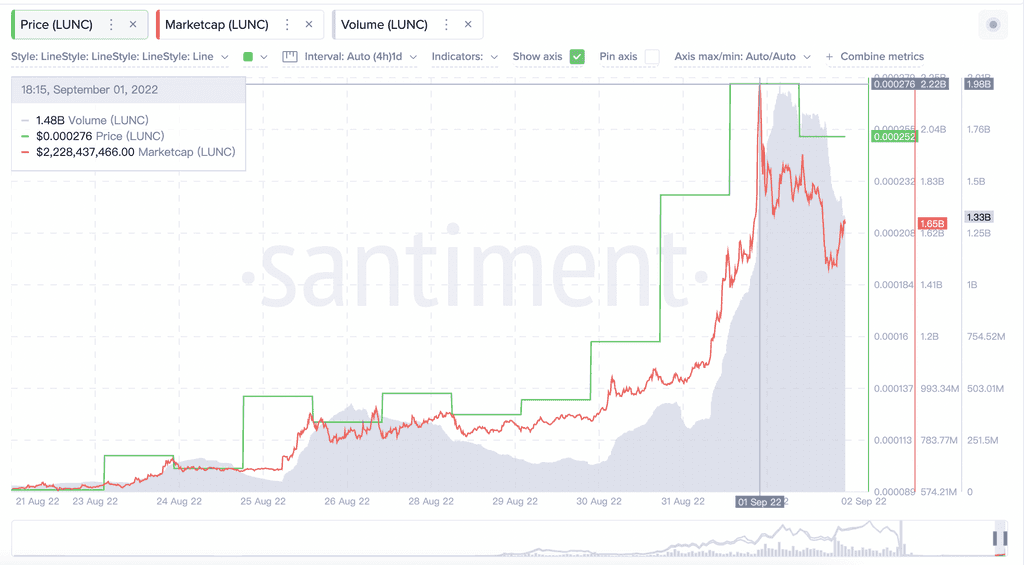 Burning tokens is equivalent to a "deflationary" strategy in the cryptocurrency world. By reducing the supply of tokens, tokens can be "thinned" and the price can rise. In the middle of August this year, Shiba Inu (SHIB) provided strong impetus for its price increase by burning tokens.

However, this simple concept does not seem to be the support for a project token to stand in the crypto market for a long time. For projects in the crypto market, "burning" is more like a marketing publicity means, attracting people to buy towards the goal of reducing the expected supply. In fact, it is more likely to promote the burning of quantity than the burning of tokens.

Currently, the industry is not optimistic about LUNC's tax proposal. According to the analysis of many crypto media, only a small number of LUNCs can be burnt eventually, and even some exchanges will choose to delist LUNCs because they do not support the 1.2% tax proposal.

"For Luna Classic, its planned token burn tax will likely do nothing more than create an excellent narrative to draw in naïve investors. The vast majority of LUNC trading occurs off-chain on centralized exchanges such as Binance, Kucoin, and Gate.io. That means even if the Terra Classic community successfully implemented a 1.2% burn tax on transactions, only a tiny fraction of LUNC would end up burned."—— cryptobriefing


The Road of Terra's Revival

Since UST’s collapse in May this year, Terra has been trying to save itself from falling into the abyss of zero. Do Kwon first proposed a Terra ecosystem revival plan, which led to the birth of Terra 2.0, and generated a Layer-1 Terra blockchain without algorithmic stability coins, which was named Terra (LUNA), while the old blockchain was called Terra Classic (LUNC).

In June, a proposal to burn 1.2% of all trading tokens without specific implementation ideas passed the community vote. From May to June, the South Korean supervision department and the US Securities Regulatory Commission launched investigations and inquiries on Do Kwon and Terraform Labs several times. Meanwhile, LUNC continued to trade, but due to low liquidity, the price fluctuated greatly. 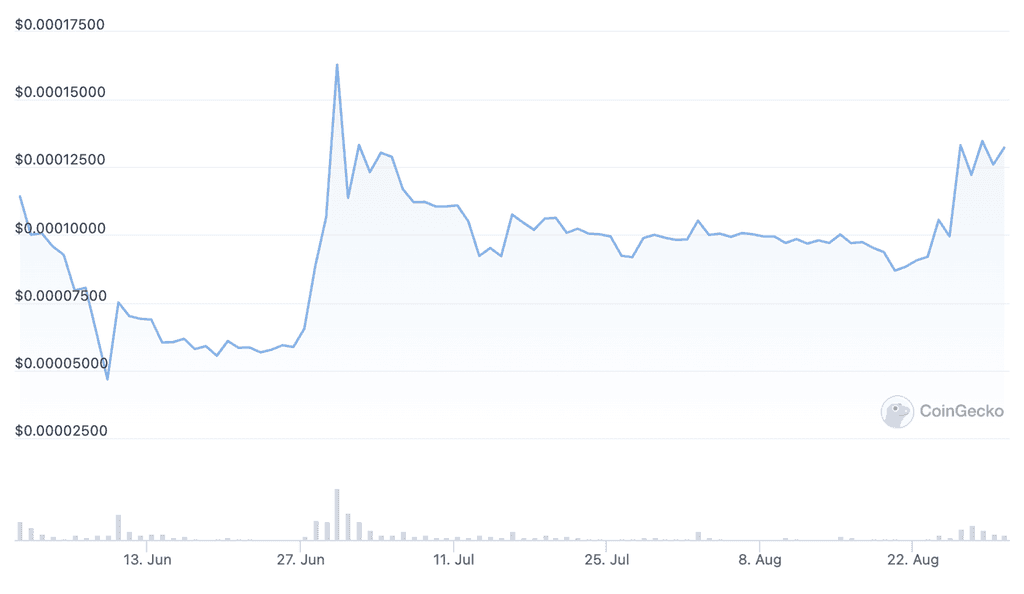 When it came to September, Edward Kim, a member of Terra community, proposed a feasible measure of 1.2% for the burning of trading tokens - 1.2% tax burning for all on-chain transactions. In this post, Edward Kim explained the advantages and disadvantages of implementing this measure, and stated that this tax proposal has many technical and economic impacts. He hoped that the community would fully discuss and understand the advantages and disadvantages before deciding whether to implement it.

Affected by this post, LUNC has set its first peak since the crash in May, reaching $0.000299, up nearly 30000% compared with the lowest price in history.

The tax burning proposal is equivalent to the best specific medicine for Terra after being hit hard. Presently, a large amount of social traffic has poured in, which has brought impetus to the price increase of LUNC. Meanwhile, because of the obvious advantages of long-term holding, more people may be encouraged to increase their holdings of LUNC and slow down its downward trend. Perhaps before waiting for the grand upgrade performance of Ethereum, we can enjoy the excitement of recent days first under the raging bear market.


Recommended reading
UST Decoupled from the US Dollar and LUNA Slumped by 60%
The Impact of USDT Depegging on the Crypto market
EOS Launches A New Fork Chain, Is It a Zombie or a Lazarus?

Author: Gate.io Observer: Jill Ma & Byron B. Translator: Joy Z.
* This article represents only the views of the observers and does not constitute any investment suggestions.
*Gate.io reserves all rights to this article. Reposting of the article will be permitted provided Gate.io is referenced. In all other cases, legal action will be taken due to copyright infringement.

Industry Analysis
Since its financial position in Asia was surpassed by Singapore, Hong Kong has been looking for opportunities to return to its position as the Asian financial center. Perhaps Web 3.0 is a good opportunity.

Industry Analysis
A significant proportion of NFT trading occurs on first-party NFT marketplaces.
Industry Analysis
In the past week, there has been a huge earthquake in the crypto market. In the domino effect caused by the FTX crash, the majority of retail investors got affected the most.
Claim 20 Point now
Exclusively for Newcomers: complete 2 steps to claim Point immediately!