Gate.io Blog UST Decoupled from the US Dollar and LUNA Slumped by 60%
Hotspot

UST Decoupled from the US Dollar and LUNA Slumped by 60% 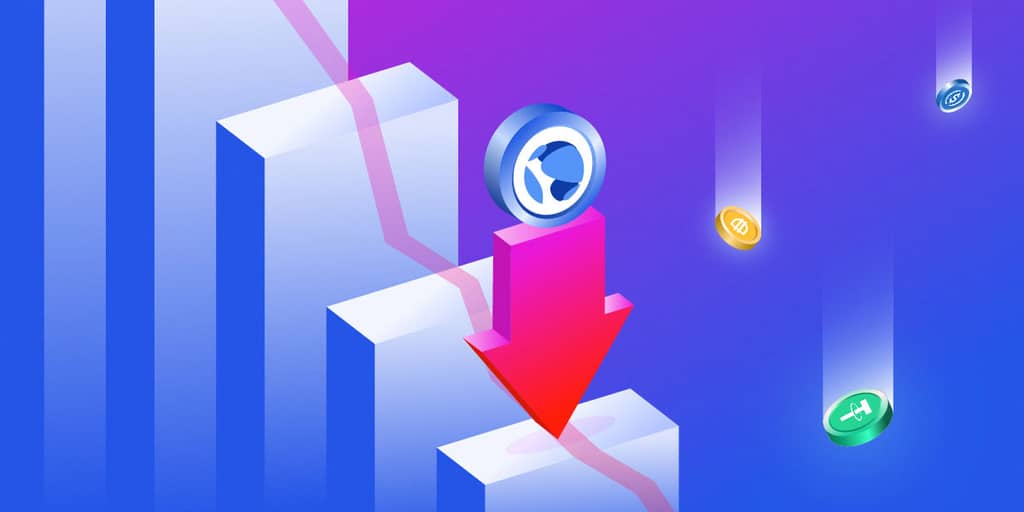 
UST crashed due to its uncoupling

The collapse of this weekend (May 7) dealt another blow to the originally depressed market. The Terra ecosystem seems to have suffered a collaborative attack. UST sold up to 285 million UST on the stablecoin exchange agreement Curve and Binance. Due to the sell-off, UST was decoupled from the US dollar and once fell to a low of $0.98. Its sibling token LUNA fell 20% on the same day, below $65, to its lowest level in three months.

In response to the decoupling incident, Do Kwon, the Terra founder, responded on twitter, "I have stipulated that it will not happen again in the next 7x24 hours. Those who are waiting for UST to become unstable will probably not see it until human extinction." 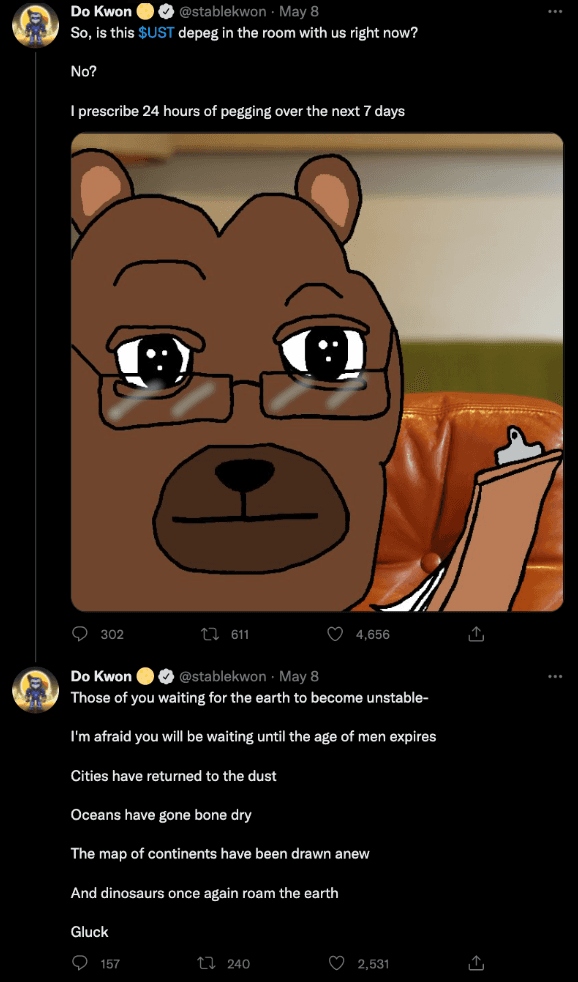 Curve Finance also tweeted that "some people began to sell vast amounts of UST. However, there was a lot of resistance, so the anchor price was restored. In order to collect a large amount of dollar value to maintain the price, a large number of ETH and stETH (ETH staked on Lido) were sold. Meanwhile, it helped greatly improve the trading volumes on Curve. " 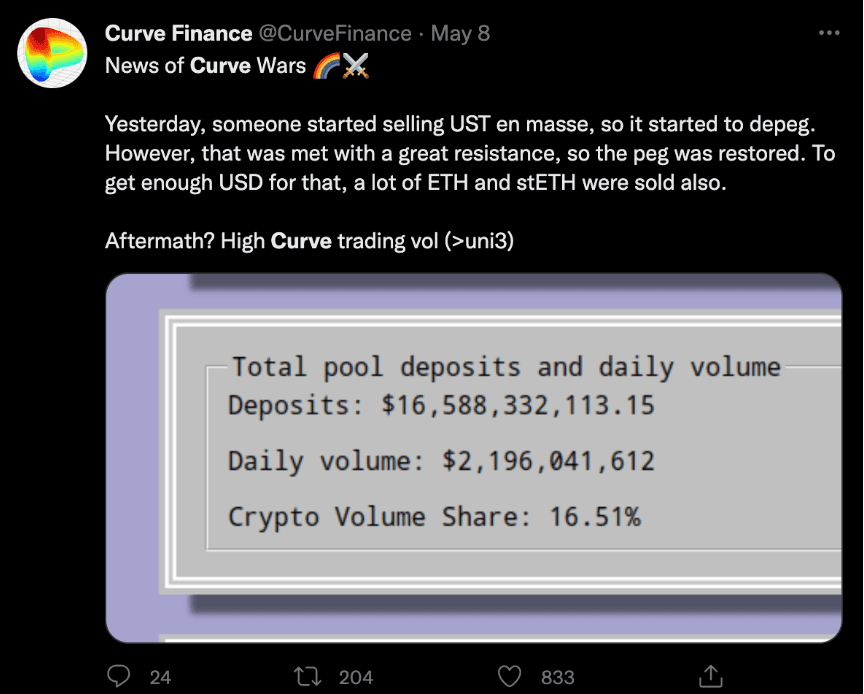 The "attack" on May 7 made Terra LUNA's main force of short position surge. Meanwhile, the keyword "Ponzi Scheme" has been popular all over the world for several hours. Some crypto opinion leaders on Twitter even released screenshots of UST falling to $0.992, claiming that this is a "historical moment".


Is it a premeditated collaborative attack? 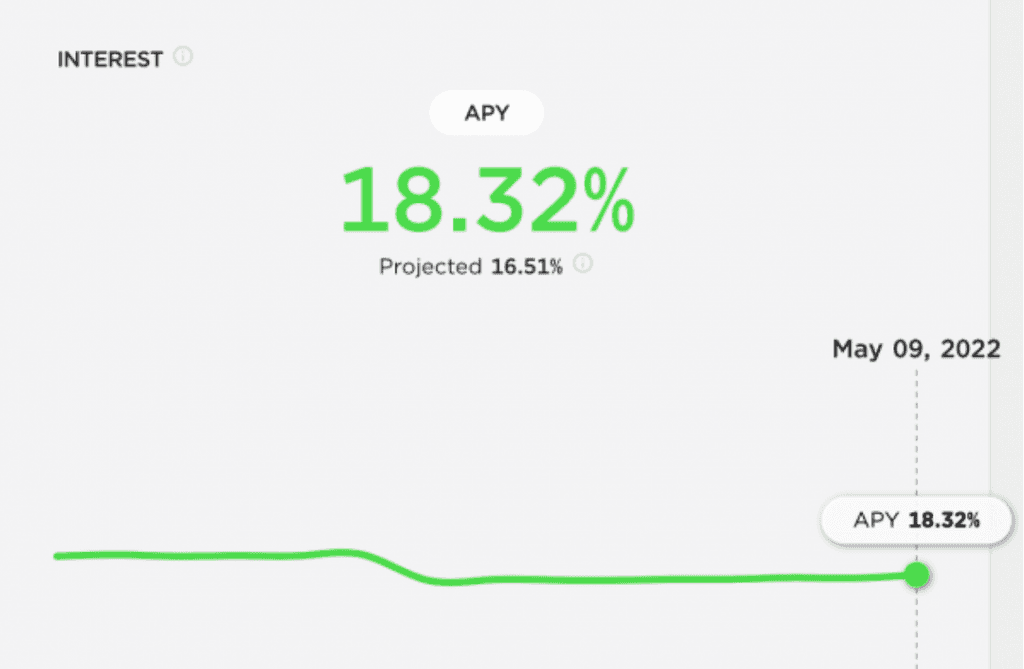 After the incident, Anchor Protocol, the largest use agreement of UST, still maintained an annualized interest rate of approximately 18%, but its deposit volume was less than 20% of UST, and the loan also decreased by 24%.

Some people believe that the decoupling event originated from a series of major withdrawal operations of Anchor Protocol. At the end of last week, the total amount of UST deposits of Anchor Protocol decreased from $14 billion to $11.2 billion (the total circulation supply of UST was $18 billion). In addition, in the liquidity pool of Curve, Terraform Labs, the creator of Terra, withdrew funds twice before and after. For the first time, Terraform Labs removed $150 million of UST liquidity from Curve. Then, an address bridged $84 million of UST to Ethereum and sold UST four minutes later (it was later proved that the address was not the address of Terraform Labs). However, the timing of withdrawal and sale was so coincidental that it caused market panic and people rushed to sell UST.

Soon after, Terraform Labs removed another $100 million of UST liquidity from Curve. Then UST began to decouple, and another address began to sell ETH and buy UST of more than $100 million. A series of operations have raised the voice that this is a "collaborative attack" in Terra community.

In the face of this headache crisis (although Do Kwon, founder of Terra, doesn't think so), people from all walks of life have made moves. On May 8, Justin Sun, the founder of TRON, tweeted that he was buying UST and replied to Do Kwon that he "may have a secret plan". 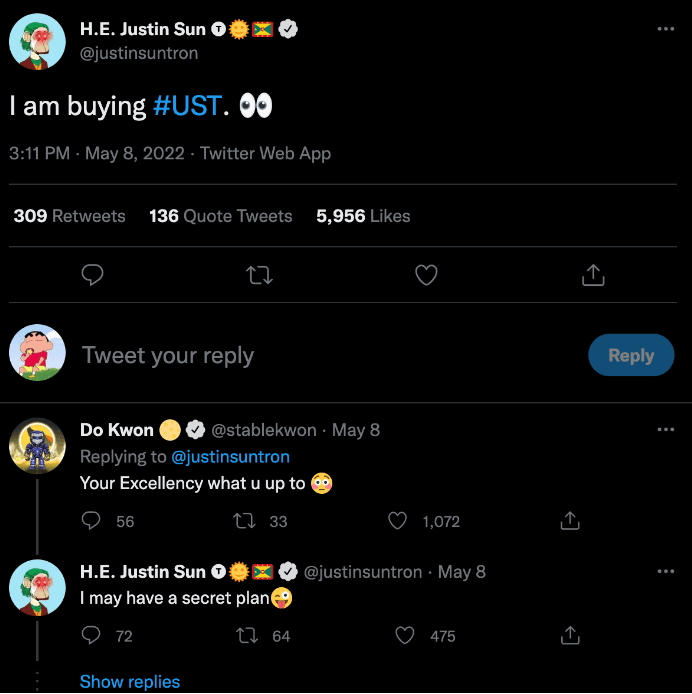 On May 9, Justin sent a statement again, saying that UST/USDD liquidity pool had been deployed on Uniswap. On the same day, LFG (Luna Foundation Guard, Terra ecosystem non-profit organization) stated that in order to protect the stability of Terra's economic system, it plans to offer $750 million BTC loans to the OTC trading platform to ensure that UST is anchored with the US dollar. 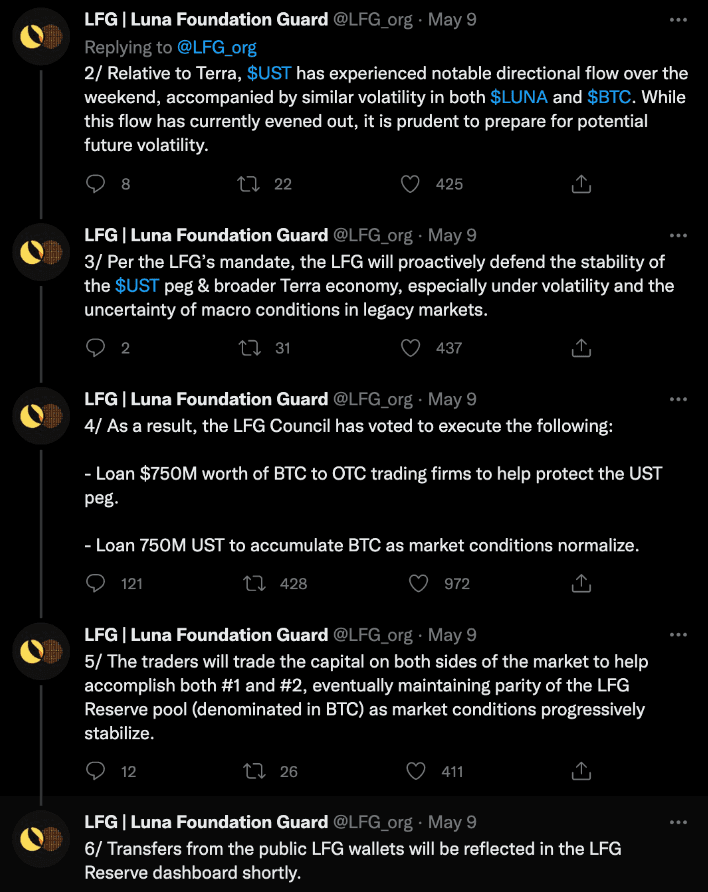 After the market returns to normalization, LFG will buy BTC with 750 million UST loaned. The transaction will be conducted at any time according to market fluctuations, and finally gradually maintain the balance between BTC and UST in the LFG reserve pool.

Luna Foundation Guard（LFG）of Terra ecosystem non-profit organization withdrew 28,205.5 in Bitcoin again at 09:20:26 on May 10, so as to ensure UST anchor price as much as possible. The BTC balance of the address has been cleared as of the time of sending the article. 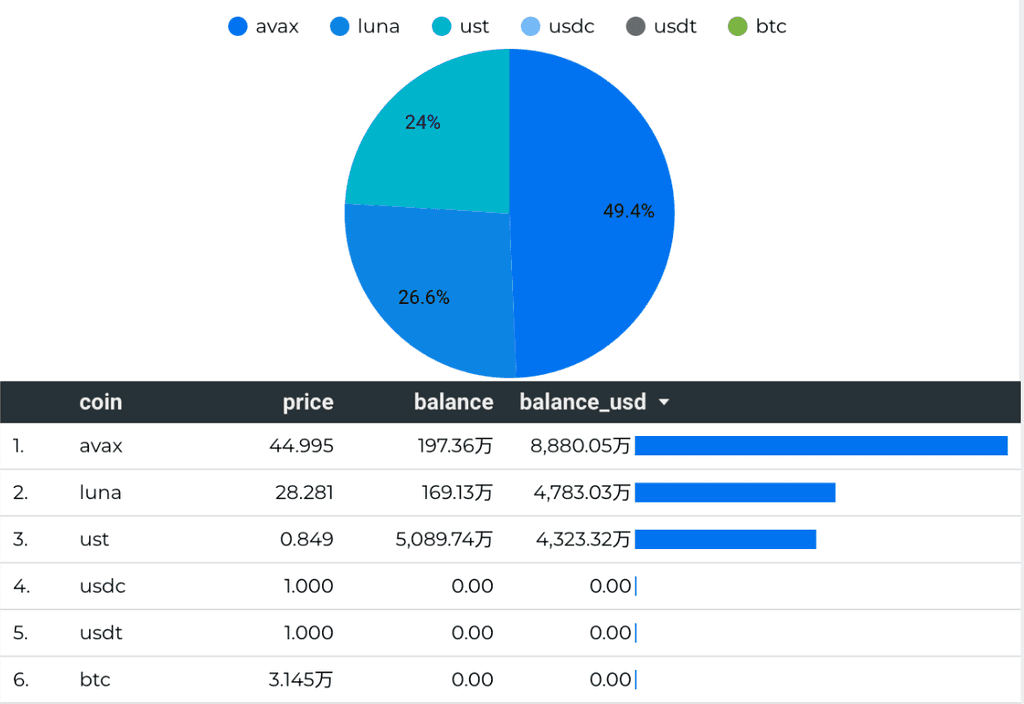 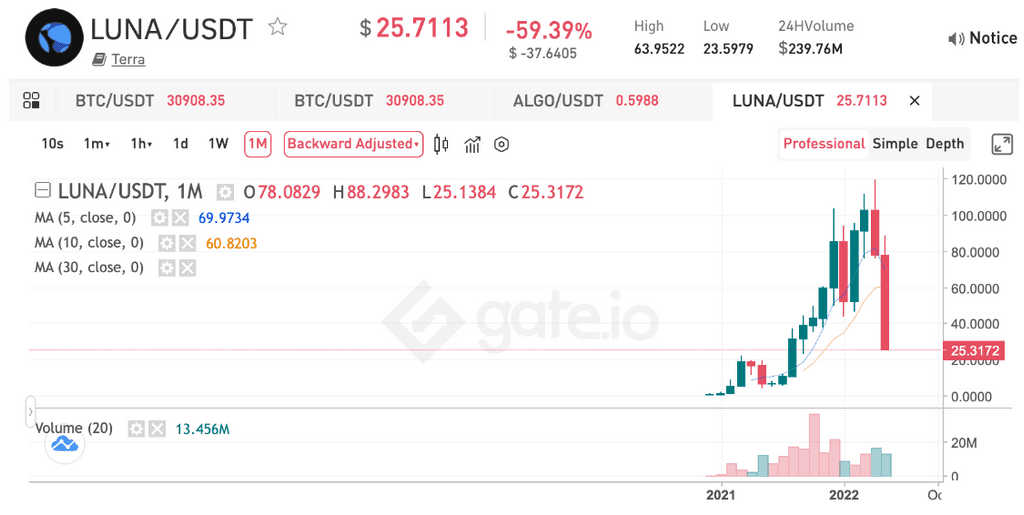 According to DefiLlama data, the current on-chain DeFi lock-up volume of Terra has fallen to $12.9 billion, representing a decrease of 44.39% in the recent 24 hours. Currently, the downward trend is still continuing.

The collapse triggered by the UST decoupling further released market sentiment, exacerbated the overall market decline, and the whole was in a state of extreme panic.

We will continue to keep an eye on how the event is unfolding and keep you updated. You are welcome to subscribe to the Gate.io blog and stay in touch with the latest UST related situation.

Author: Gate.io Researcher: Jill Ma Translator: Joy Z.
* This article represents only the views of the researcher and does not constitute any investment advice.
*Gate.io reserves all rights to this article. Reposting the article will be permitted provided Gate.io is referenced. In all other cases, legal action will be taken due to copyright infringement.

BTC -1.12%
ETH -1.36%
LUNA -2.34%
Share with：
Follow us：
Trending
Crypto market will be in upheaval in September. How will investors survive?
What Is the LUNC Tax Burning Proposal?
What Is the Future of Ethereum?
High Possibility of a 75 Point Rise in Federal Fund Rate in September
Daily Flash | Global FX markets are tanking as inflation spreads through the world, and what’s happening with Ethereum Shanghai upgrade?
Claim 20 Point now
Exclusively for Newcomers: complete 2 steps to claim Point immediately!