Gate.io Blog With the International Tension Superimposed on the Massive Attack on Solana, Is the Best Bet Advancing or Retreating?
Hotspot

With the International Tension Superimposed on the Massive Attack on Solana, Is the Best Bet Advancing or Retreating? 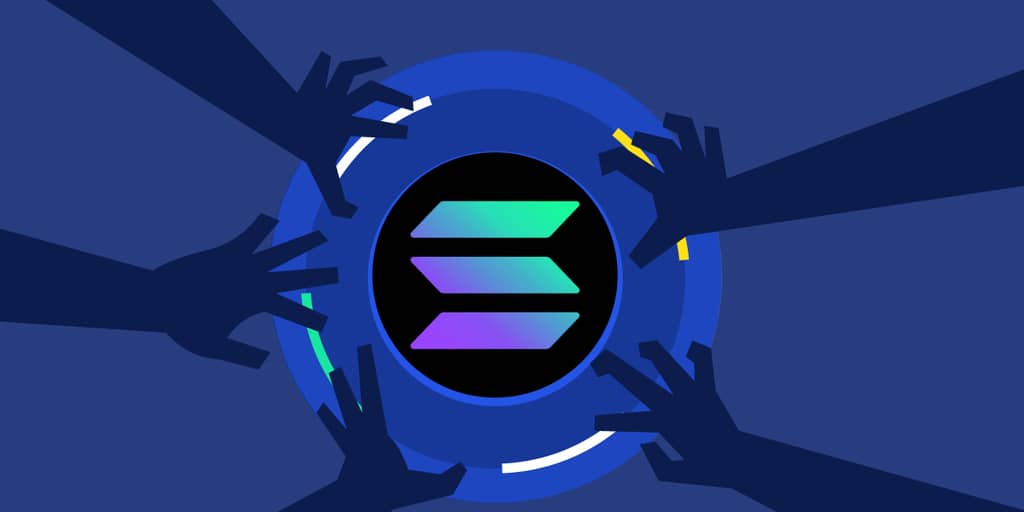 [TL; DR]
- Nancy Patricia Pelosi, President of the US House of Representatives, insisted on visiting Taiwan despite China's opposition on August 2, which impacted Sino-US relations.
- The Solana ecosystem wallet was attacked on a large scale on August 3. Presently, the attack continues, and more than 9000 wallets have been affected.
- The US Senate proposed to treat Bitcoin and Ethereum as commodities on August 4, which did not "cause a sensation" in the market.


One Wave Has Hardly Subsided When Another Rises

Currently, the international situation is more and more treacherous, and the public opinion about the possible conflict between China and the United States has reached its peak in recent years. Since the outbreak of the conflict between Russia and Ukraine in February 2022, geopolitical uncertainties have been affecting the trend of the crypto market.

The crypto market in the long-term bear market cycle also seems to have ushered in an "eventual year". On August 2, Nomad, a cross-chain protocol, was stolen for approximately $190 million. The next day, Solana, a public chain, was attacked on a large scale.

Under the circumstance of the current multi-dimensional negative sentiment, the positive news on August 3 that the U.S. Senate plans to treat Bitcoin and Ethereum as commodities and regulated by the US Commodity Futures Trading Commission (CFTC) have not attracted enough attention, and the market is still volatile and downward. Presently, the proposal is still under consideration.


Solana Was Attacked On a Large Scale, and SOL Fell

On August 3, Solana ecosystem wallets (including Phantom, Slope, etc.) may be affected by unexplained vulnerabilities, resulting in large-scale theft. The stolen funds flow to the following four addresses:


Magic Eden, the NFT market in the Solana ecosystem, issued a warning at the beginning of the event, stating that there is a widespread SOL vulnerability that can deplete the wallet assets of the entire ecosystem. @JuanRdBO, a Decaf developer, later responded on Twitter that it was not a problem with trusted applications. If the user has interacted with DeJBGdMFa1uynnnKiwrVioatTuHmNLpyFKnmB5kaFdzQ (Phantom interacted with it when creating the wallet), the wallet will be invaded. 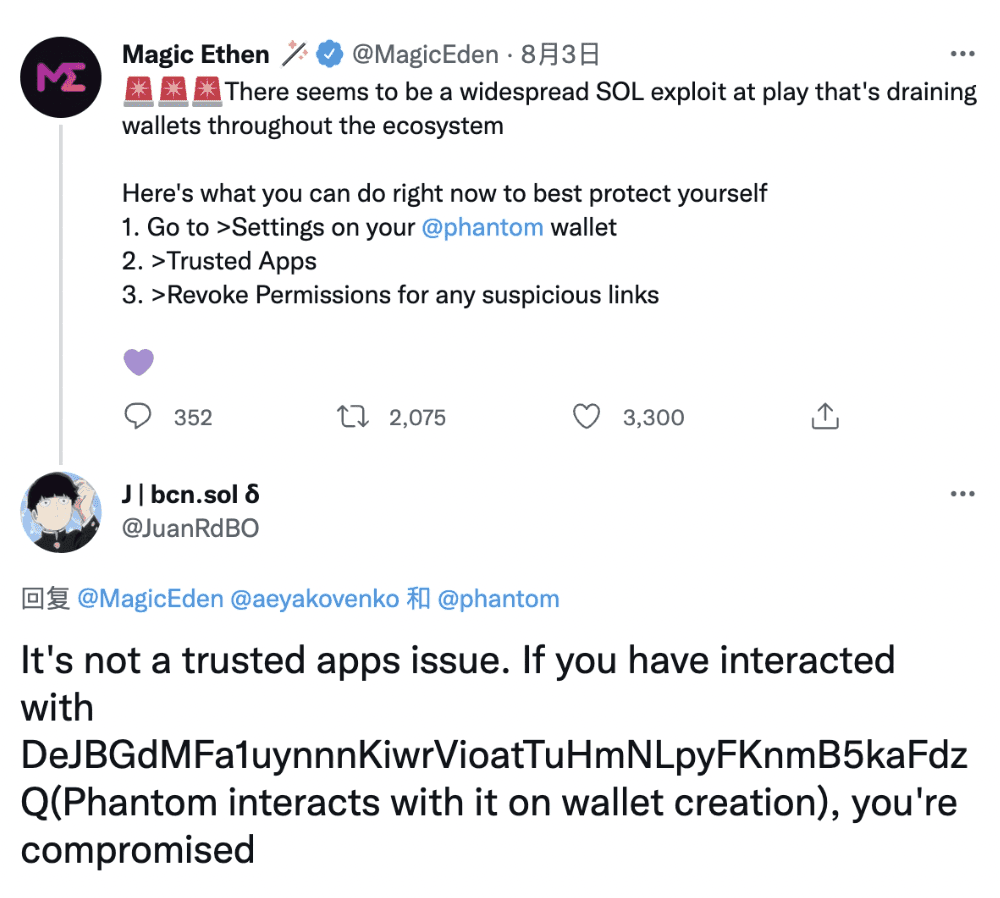 As soon as the attack news came out, SOL fell by approximately 8%. Subsequently, Phantom, the Solana ecosystem wallet, announced that it was identifying the vulnerabilities reported in the Solana ecosystem, and the team did not think this was a unique problem of Phantom. But only ten minutes later, OtterSec, a Solana audit company, posted on Twitter that more than 5000 Solana wallets had been exhausted in the past few hours, which confirmed that many people on Twitter claimed that their balances had disappeared. OtterSec's analysis showed that these transactions were signed by the owner, indicating the existence of private key disclosure.

On August 4, SlowMist released an analysis of the attack. Approximately 60% of the stolen users used Phantom, approximately 30% used Slope, and the rest used Trust Wallet, Coin98 Wallet, etc. IOS and Android were not spared. SlowMist stated that presently, the attack is still continuing. From the perspective of transaction characteristics, the attacker signed and transferred the account without using the attack contract, and it is preliminarily judged that the private key was leaked. Many victims reported that they have used many different wallets, mainly mobile wallets, so it is speculated that the problem may occur in the software supply chain. It is recommended that users transfer the hot wallet token to a relatively safe location such as a hardware wallet or a well-known exchange at the beginning, and then wait for the event analysis results.


The Question of Supervision was Further Deepened, and [Whether to Supervise] was Upgraded to [Who will Supervise]

On the same day that Solana was attacked on a large scale, four members of the US Senate Agriculture Committee proposed a bill to establish a mandatory regulatory system for cryptocurrency exchanges, which was supported by both parties in the United States, but the attitude of the SEC committee is not clear.

The bill will provide a legal definition of digital assets and be supervised by the Commodity Futures Trading Commission (CFTC). The bill defines Bitcoin and Ethereum as "bulk commodities", but "excludes some financial instruments, including securities", which makes people confused about which digital assets belong to securities.

"The Bill marks the latest achievement in the fierce struggle between federal agencies and congressional committees over who will regulate cryptocurrency. 13 years after the birth of Bitcoin, cryptocurrency is still largely unregulated by the federal government, and investors are not protected from fraud and market manipulation."—— Wall Street Journal

It may be because the mid-term election in November is coming, and the legislative agenda of any bill proposed by the current Congress is limited. Once the news comes out, the market does not respond much, and Bitcoin still maintains a downward trend. The collapse of the crypto market in recent months has promoted the decision-makers' determination to formulate regulatory regulations. However, there are urgent problems to be solved, such as which institution or department the cryptocurrency belongs to, the degree of supervision, and how to define the asset type.


How to Protect Your Assets in Case of Market Instability

Since this year, due to the conflex international situation, the pandemic COVID-19 and other factors, the crypto market has been in turmoil, and various hacker attacks have occurred frequently, which inevitably makes people worry about asset security. As suggested by SlowMist above, it is a safer choice to transfer tokens to exchanges or cold wallets under current circumstances. If you want to get some benefits on the basis of safely saving tokens, you can choose the flexible term product or the periodic investment product in Gate.io HODL & Earn. The flexible term product can be deposited and withdrawn at any time, while the periodic investment product can ensure that it is profitable in a long-term dimension.

Author: Gate.io Observer: Byron B. Translator: Joy Z.
Disclaimer:
* This article represents only the views of the observers and does not constitute any investment suggestions.
*Gate.io reserves all rights to this article. Reposting of the article will be permitted provided Gate.io is referenced. In all other cases, legal action will be taken due to copyright infringement.