2. Since the ETH staked by the user on the beacon chain cannot be retrieved immediately, Lido provides the user with stETH as the staking voucher and opportunity cost compensation, which makes the ETH in the staked state also have a certain degree of liquidity.

3. Presently, ETH can only be converted to stETH in one direction. Unlike the relationship between US dollars and UST, ETH and stETH are not linked in a real sense.

4. In terms of leverage risk, stETH can also be used as collateral in the DeFi project. The holder can stake stETH on AAVE in exchange for ETH, deposit it back in Lido in exchange for more stETH, earn higher staking income, and carry on repeatedly, and finally obtain about three times the leverage.

5. When the stETH/ETH reaches 0.85, the income from purchasing stETH will reach approximately 20%, which provides strong support for stETH in the long term. So at present, the probability of the death spiral is not very high.


Since June 8, influenced by the trust crisis of Celsius and the selling of stETH by crypto blue whale, the proportion of the liquidity pool of stETH has been seriously unbalanced, and the price of stETH and ETH has a negative premium. Currently, the ratio of stETH to ETH fluctuates around 0.95. The Fed's interest rate hike and Luna's collapse have pushed the crypto market into a bear market, and traders are already very nervous. Stimulated by the bad news, the price of Ethereum is even stronger. In the past 7 days, the ETH price has dropped by 33.4%, and has fallen several integer levels successively. It is now reported as $1,205, and the price of Bitcoin has also dropped by 26.84%.

In this case, people need not ask: as the second largest cryptocurrency, why is Ethereum in a depegging crisis? Will a negative stETH premium lead to a chain reaction and even make ETH return to zero like LUNA?

For the news about Ethereum's price plummeting due to stETH depeg, please refer to our blog post: Depeg Returns | stETH has a Liquidity Crisis and Ethereum is Implicated

The return to zero of LUNA is closely related to the "UST-LUNA arbitrage mechanism", and the continuous decline of Ethereum prices is also related to the excessive leverage of stETH.

When users stake a certain amount of ETH to Lido, they will be able to obtain a staking return slightly lower than that of the Ethereum beacon chain. Currently, the APR is approximately 4%. Since the ETH staked by the user on the beacon chain cannot be retrieved immediately, Lido provides the user with stETH as the staking voucher and opportunity cost compensation, which makes the ETH in the staked state also have a certain degree of liquidity.

Presently, the conversion from ETH to stETH on the Lido platform is one-way. Users need to wait several months after Ethereum 2.0 is officially launched before they can exchange stETH back to ETH. Unlike the relationship between USD and UST, ETH and stETH do not have a "real linkage relationship". However, in essence, stETH is also an ERC-20 token. People can trade between stETH and ETH in various DeFi liquidity exchange pools. The exchange ratio formed by the supply and demand of the two assets in this swap pool is the "fair price" between stETH and ETH. 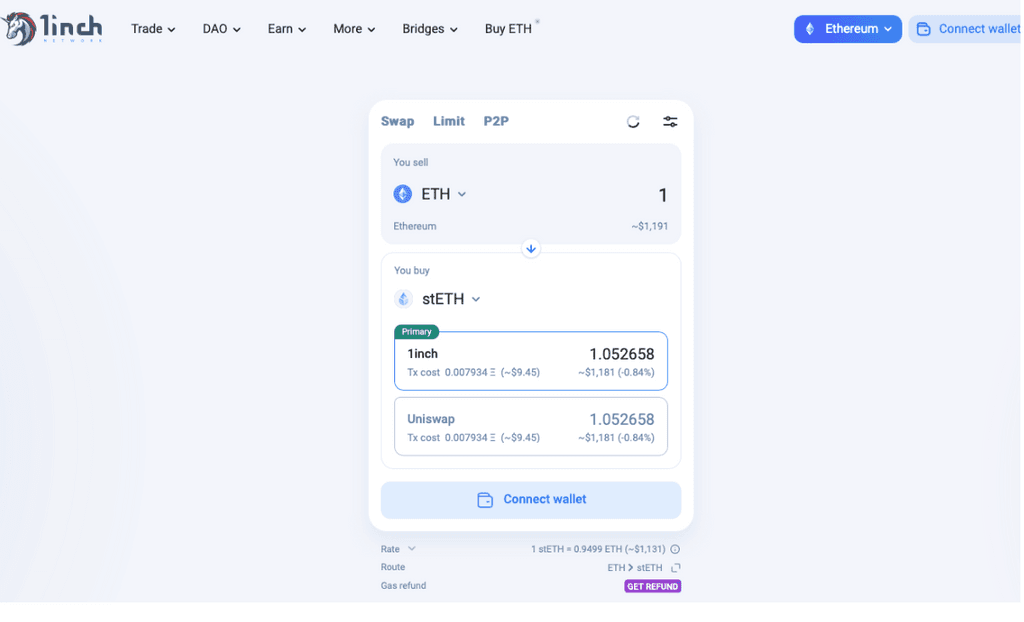 
Due to this one-way conversion process from ETH to stETH on the Lido platform, the relationship between ETH and stETH may be closer to the relationship between "spot" and "futures". Only after the merger of Ethereum is officially completed and the staked ETH can be successfully redeemed can the exchange between ETH and stETH be stabilized through two-way arbitrage. Before the completion of the merger, the exchange ratio between the two will deviate from 1:1 due to the influence of investors' confidence in the Lido project, ETH2.0 online expectation, leverage risk, liquidity defects of stETH and other factors. If people have great trust in Lido's long-term operation and are optimistic about the development prospects of Ethereum, the ratio of stETH to ETH can be maintained at 1:1, and even a small positive premium may appear. For example, if people are worried that the Lido project may make off with money or ETH2.0 cannot be launched in time, or that the ETH price has not continued to decline after the merger, there will be incentives to sell their own stETH, and the negative premium of stETH to ETH will appear.

In terms of leverage risk, the above-mentioned stETH is also an ERC-20 token, which can also be used as collateral in the DeFi project. For example, the holder can stake stETH on AAVE in exchange for ETH. These ETH can be re deposited in Lido in exchange for more stETH, earning higher staking income, and repeatedly borrowing and lending, and finally obtaining about three times the leverage. This process makes the leverage ratio of the whole system continuously improve, and the leverage liquidation risk also increases. Presently, on AAVE, the LTV of stETH is 69%, which means that users can lend eth corresponding to 69% of the value of stETH. The liquidation threshold of stETH is 81%, which means that when the value of lending ETH rises to 81% of the value of staked stETH, the AAVE contract will force the sale of stETH to repay the debt. 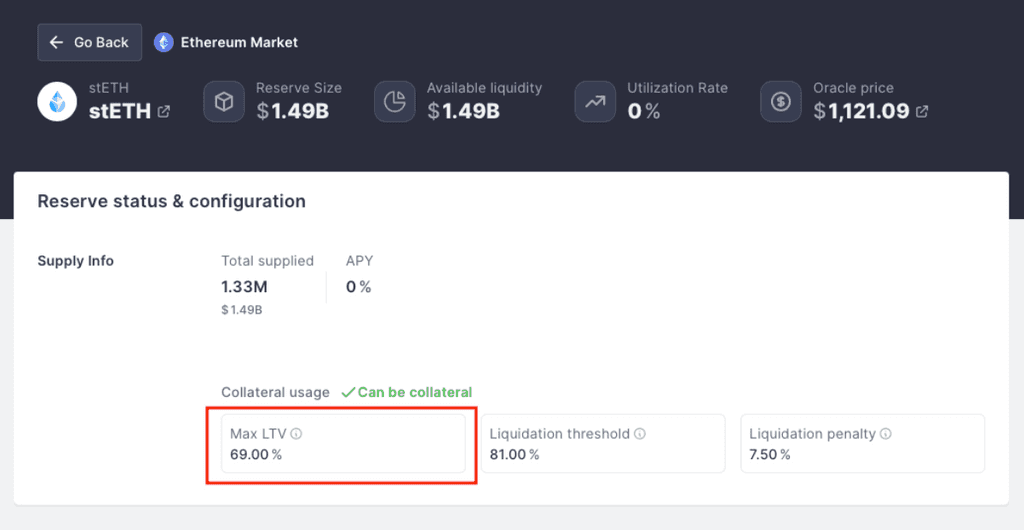 
Negative news poses a tide of selling of stETH

The black swan incident always happens at the right time. On June 7, the crypto financial platform Celsius Network was exposed to have lost at least 35,000 ETH in the event that the private key of Ethereum 2.0 staking solution Stakehound was lost. However, the company chose to hide this information from users for more than one year. As the disclosure continued, it was found that Celsius staked 44% of the ETH obtained from users to Lido and exchanged it for stETH, and 29% of them carried out beacon chain staking mining on their own. This means that if users extract a large amount of ETH from Celsius, only 27% of ETH can be used by Celsius to deal with it, and 44% of ETH can be returned to users only after they use stETH to exchange ETH from Curve and other liquidity pools. This led to the collapse of the market's trust in Celsius, and also led to concerns about the future of stETH.

In addition, on June 8, a crypto blue whale exchanged 19,998 stETH for 19,481 ETH at a time on the Curve, resulting in a serious imbalance in the proportion of the two assets in the stETH-ETH liquidity pool on Curve, which further triggered panic in the market. Currently, ETH accounts for 21.83% and stETH 78.17% of the liquidity pool on Curve. 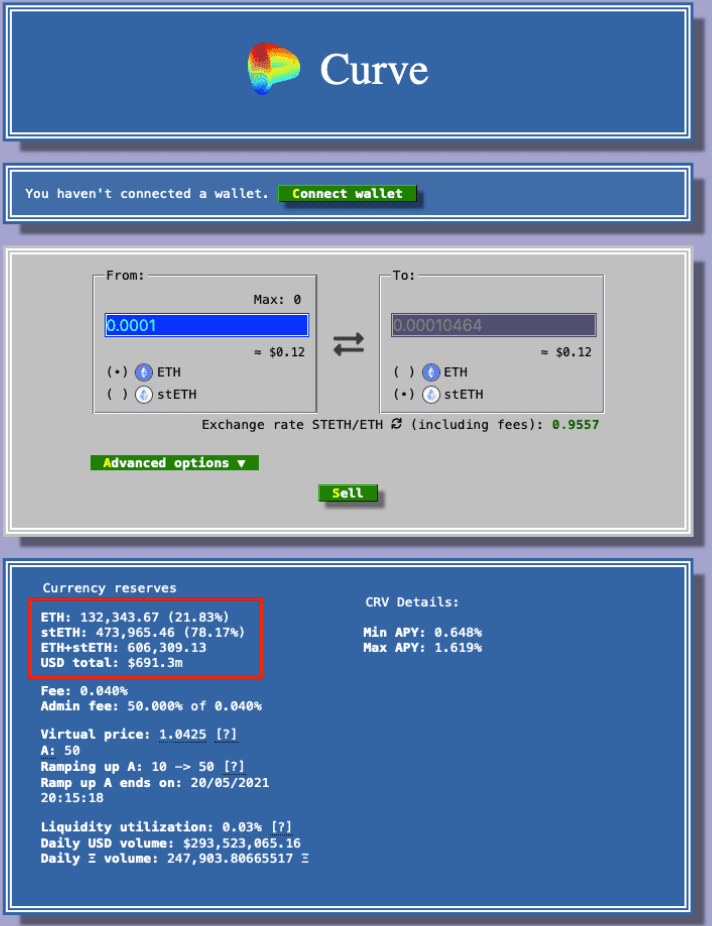 
How likely is the death spiral?

stETH and UST have different mechanisms, and the reasons for their depeg are not only the same. Based on the TVL and clearing threshold of the stETH lending pool on AAVE, when the stETH/ETH reaches 0.69/0.81=0.85, the stETH clearing will be triggered, which may trigger the death spiral. Compared with the current 0.95, the ratio of 0.85 still has a certain distance.

After the merger of Ethereum, stETH can be gradually converted into ETH. To some extent, buying stETH is equivalent to buying ETH futures settled about one year later at a discount price, and at the same time, 4% of the staking income can be obtained. When the stETH/ETH reaches 0.85, the APY brought by the purchase of sth will reach about 20%, which provides strong support for stETH in the long term. So at present, the probability of the death spiral is not very high.


Gate.io Featured Articles
Can A Hard Fork Revive the Collapsed LUNA?
Luna Chain Reaction Poses Significant Capital Loss, and the Security of DeFi Financial Products Initiates Dispute
The Decoupling of UST Triggered a Deluge of Regulation | What is the Future of Stablecoin?