At the 3rd anniversary of Gate.io Futures Trading, in order to reward users for their support, we are having the Global Futures Trading Competition. This competition includes troop showdown, solo showdown, early bird rewards and invitation rewards and so on. The expandable prize pool is up to $2,000,000. We are sincerely inviting global futures traders to participate in and compete for the championship.

II. Requirements
All Gate.io users can participate in the competition with over 200USDT in his/her contract account, and can freely choose to join in troop showdown, solo showdown or form a troop as troop captain. The minimum troop should have no less than 5 members. If the troop has less than 5 members before the competition starts, the troop will be automatically disbanded and put to solo showdown.
Registration：https://www.gate.io/futures/competition

Activity 2 - Early Bird $7,000 NFT Rewards
During the 7 day early bird stage, the first 100 early birds registered each day from 00:00 UTC will receive one NFT each. 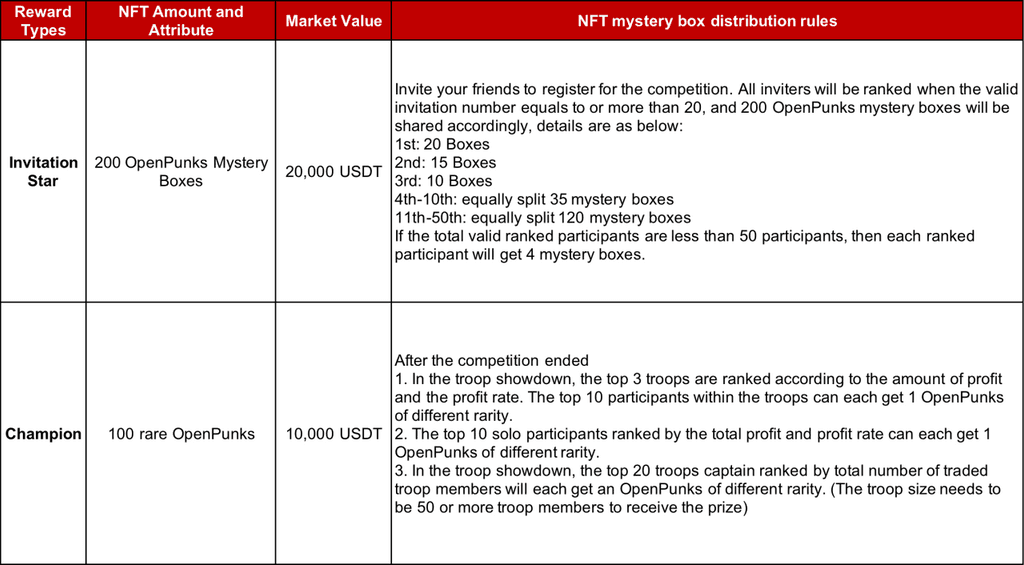 3. NFT Event Guide
Participants can receive prize 1, prize 2 and prize 3, no restrictions to receive the prizes.
NFT rewards will be counted daily (distributed next day), details can be checked in "NFT Mystery Box >> My Assets".
After the competition, participants can trade their NFT prizes in the Gate.io mystery box markets.

Note: The top 1 troop refers to the troop that ranks the first in terms of profit in the troop showdown.

VII. Notice
1. Gate.io reserves the right to disqualify users from participating in the competition due to the following circumstances, including but not limited to: cheating, registering users in batches, self-dealing, market manipulation, etc.;
2. If the platform's risk control system detects the use of third-party tools for not trading, batch registration of inflated prize pools, matching transactions, etc., the qualification for the competition will be disqualified, and serious cases can be blocked.
3. Gate.io reserves the right of final interpretation of the terms and conditions of this competition.
4. Where any discrepancy arises between the translated versions and the original English version, the English version shall prevail.

Sign up to enter the crypto gateway and get 40% commission from referrals
Download iOS/Android App right now.