The Eurozone, which reported a 9.9% annual inflation rate for September on Wednesday, is facing an energy crisis which, according to the International Monetary Fund, puts the European Central Bank on a shallower path for interest rates.

In the U.S., the Biden administration announced the extension of the releases of the U.S. Strategic Petroleum Reserve well into December which is intended to offset any market volatility expected once a European oil embargo goes into effect on Dec. 5.

In the U.K., the consumer price index soared 10.1% in September and economic troubles continue to pile up as inflation and a cost-of-living crisis continue to batter households and businesses. The BoE still expects to go ahead with its quantitative tightening program from November.

In Japan, the yen (USDJPY 149.92) traded at levels last seen in 1990 and has traders on guard for potential government intervention to shore up the currency. In China, the offshore yuan was around a fresh record low and has investors concerned over its economic outlook after President Xi reiterated his stance on zero-covid policy at the latest Politburo Standing Committee.

Around the world, interest-rate differential, or difference in monetary policy among central banks, is weakening a basket of currencies against a soaring dollar, even as projections point to 100% certainty of a U.S. recession in the next 12 months, per Bloomberg data.

Global concerns are rising over a strong dollar which can trigger a liquidity or credit crisis as foreign governments and private corporations have trillions in dollar-denominated debt that they’re struggling to pay back.

This week, traders should keep a lookout for these key events: 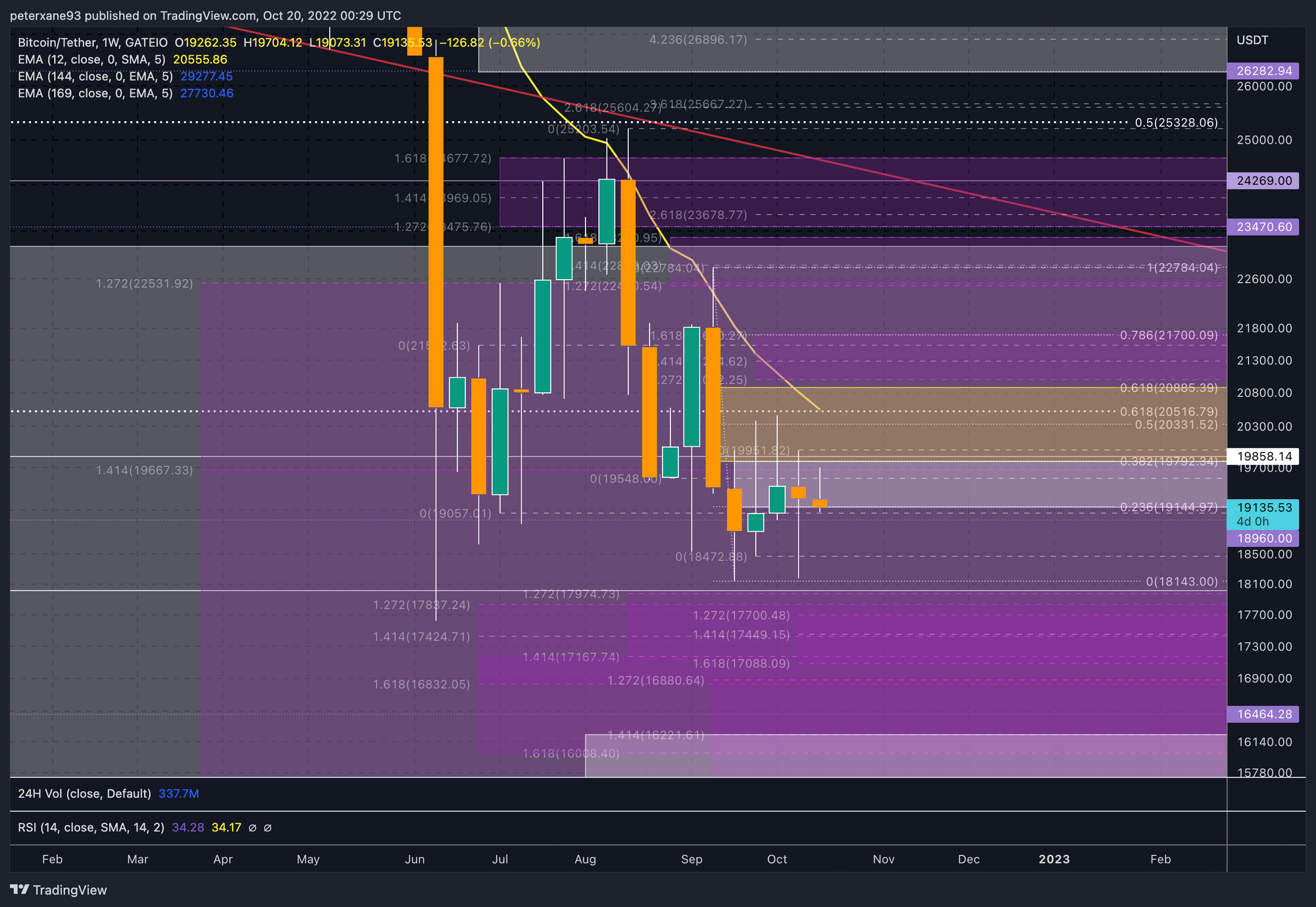 Throughout the past week, BTC consistently traded below said level, and having a weekly candle close above it is a good sign for the bulls. Though, notably, the weekly candle is still a bearish one which indicates the sellers still have an advantage.

On the contrary, the bears will have to pull BTC back below the 23.6% (19,144) level to prevent a “higher-high” price action formation from forming on the weekly timeframe, or at the very least, below the closing price of the last candle (19,262) in order to maintain a bearish outlook. 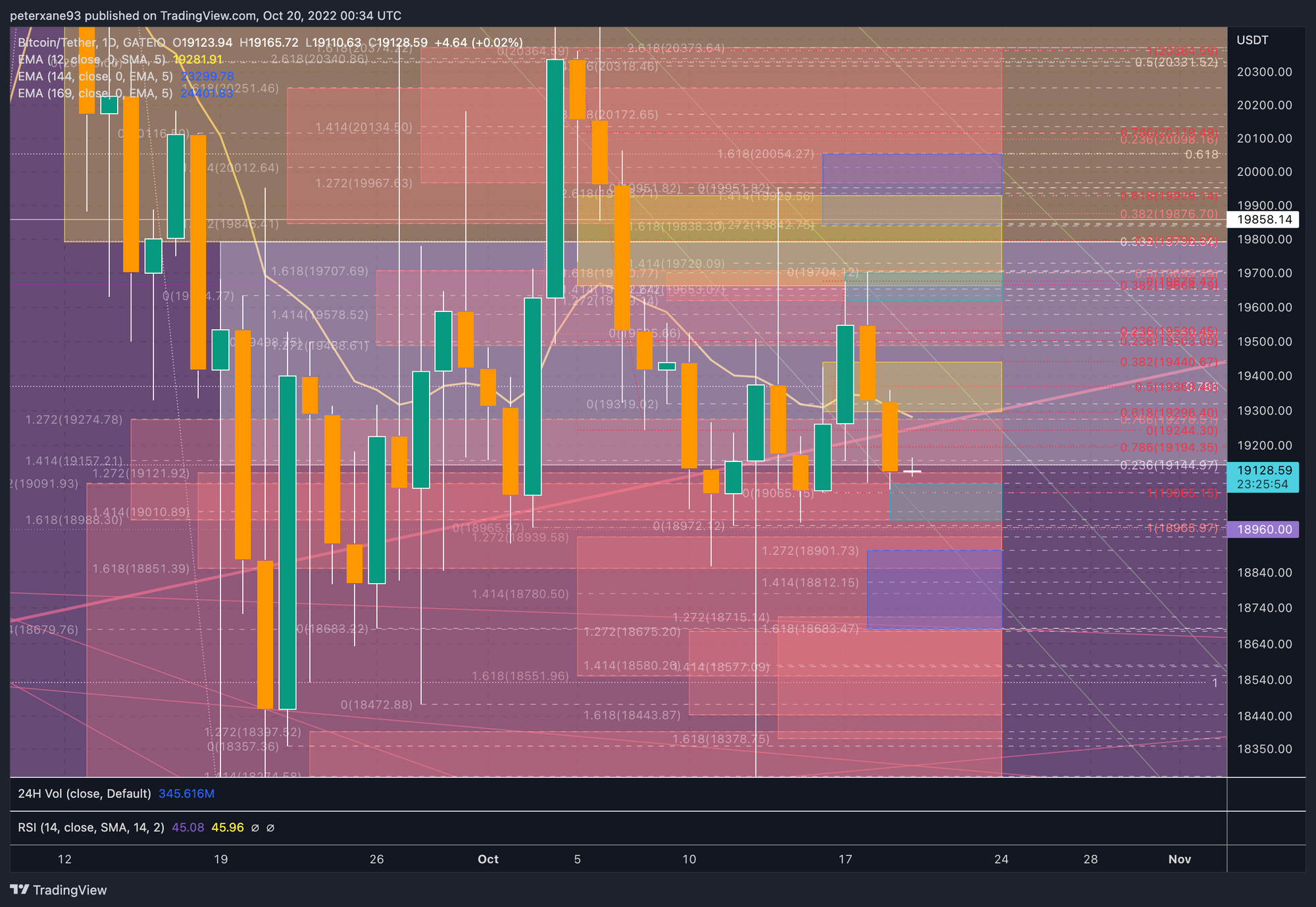 On Monday, the last price of BTC (19,549) closed above the aforementioned resistance zone (19,380 - 19,523) which helped establish a “higher-high” price action formation on a daily timeframe, implying a short-term sentiment change to the long side. 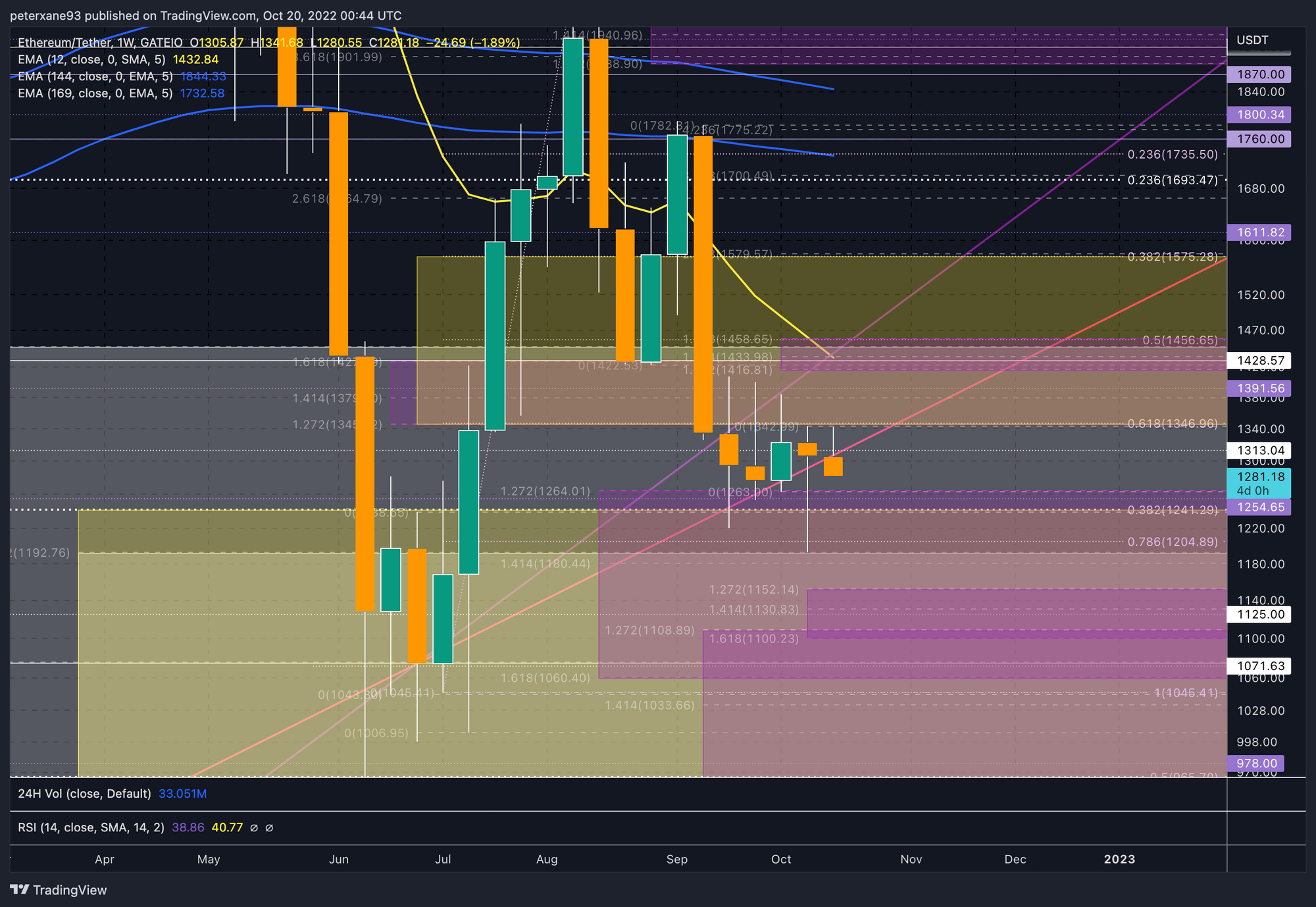 Notably, ETH made a strong return from a low of 1,192 last week which prevented a “lower-low” price action formation from forming on a weekly timeframe. This signifies the struggles bears have been experiencing to bring the price of ETH below the weekly trendline. The Sunday candle had established a “higher-high” price action formation. To solidify its strength, in the coming days, the bulls will have to make the next “higher-high” wave by closing above the 61.8% (1,310) level and from there towards the next Fibonacci Extended resistance zone (1,326 - 1,332).

On Monday, likewise to BTC, the last price of ETH (1,331) was within the Fibonacci Extended resistance zone (1,326 - 1,332) which helped establish a “higher-high” price action formation on a daily timeframe, implying a short-term sentiment change to the long side.

On Tuesday, ETH’s declining pattern followed BTC which started during the U.S. equity trading session (13:00 - 18:00 UTC). The directional correlation between U.S. futures and crypto markets has been aligned so far to the precise hour, but the same can’t be said for volatility which is much higher for crypto.

Update: On Wednesday, ETH traded in a similar pattern to BTC but was comparatively more steady. The major decline happened around 22:00 UTC which saw ETH breaking below the 78.6% Fibonacci retracement level. Today, the key support zone will be 1,274 - 1,266, and more importantly, if ETH breaks below the opening price (1,275) of the Oct. 19 daily candle, a “lower-low” price action formation will confirm further bearishness.

📌 The topic of the Day: ‘Layer-3’ Scaling According to StarkWare

According to Ben-Sasson, StarkWare's President, the Merge not only proved that Ethereum is capable of serious updates but also gave developers more confidence in their ability to execute the next parts of the upgrade and laid important groundwork for scaling solutions like StarkWare.

Speaking with Decrypt on how layer-3 would work in practical terms, Ben-Sasson said,

“Basically, our layer-2 is like tethering this much bigger ecosystem to Ethereum and having this bigger ecosystem have the same security as Ethereum because of the math of Starks. We can grow something like a tree, but on each one of the leaves of this tree we can start to grow another tree using the same mathematical security. And that is exactly what layer-3 is.”

“Layer-3 is going to be much faster for specific applications like payments, NFTs or gaming, but if you want interoperability and composability you are probably better off with layer-2.”

For crypto enthusiasts who follow the development of Web3 closely, no doubt StartWare’s launch of its native token is on their radar. However, the launch was delayed back in September and is slated for sometime in October, and the team has cited that “there will be no free token for users initially, with provisions for teams that are going on a long journey.”