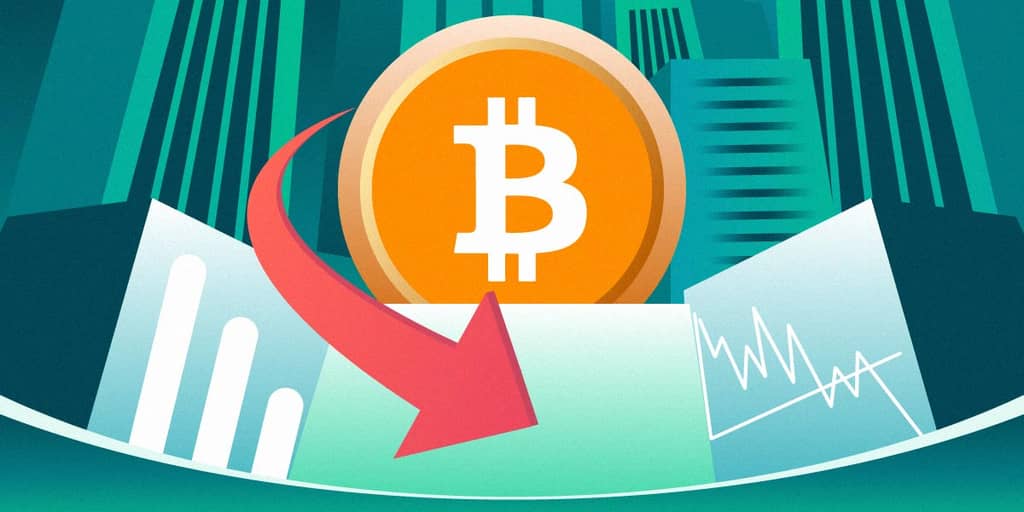 
1. When it comes to Bitcoin, extreme volatility has proven to be somewhat normal.
2. There have been seven major Bitcoin market crashes to date.
3. Market corrections of 30% or more are typical in the Bitcoin space.
4. Bitcoin has typically recovered from major market crashes throughout its history.


Bitcoin: Where Extreme Volatility Is Normal


Thirteen-year-old Bitcoin is a youngster by the standards of the stock market. However, the world’s largest cryptocurrency has had a very colorful and volatile history since its launch in early 2009. In this relatively short period of time, Bitcoin has suffered numerous crashes, and some of these declines could send the blood pressure of any seasoned stock market investor through the roof.

Crypto investors, on the other hand, seem to have grown accustomed to the roller-coaster that Bitcoin is. So in this article, we will have a look at the biggest Bitcoin crashes in history. A word of warning, though: what you are about to read is not for the faint-hearted.


The first recorded large crash of Bitcoin was also the biggest one in its history in terms of the percentage decrease. In June 2011, Bitcoin was a relatively little-known digital asset traded mainly on the now defunct Tokyo-based Mt. Gox Exchange, the dominant Bitcoin exchange at that time.

On June 19, a hacking attack on the exchange abruptly sent the price of Bitcoin from $17.5 USD to $0.01 USD, a 99.9% loss of value. The trading was quickly suspended and the price was restored to the pre-attack levels.

This is the only large-scale Bitcoin price crash that was caused by a hack rather than by market fundamentals.


By late 2013, Bitcoin was confidently rising and the optimism towards the new “digital money” platform was high. However, Bitcoin’s Achilles heel was its heavy reliance on the mining operations in China. On December 5, 2013, the Chinese government announced a ban on all forms of cryptocurrency activity.

The ban led to a massive crash in the price of Bitcoin. On December 4, the day before the announcement of the ban, Bitcoin was trading at $1,121 USD. It started crashing immediately upon the news, and by December 18, it fell to $559 USD, a drop of 50% from the December 4 peak. 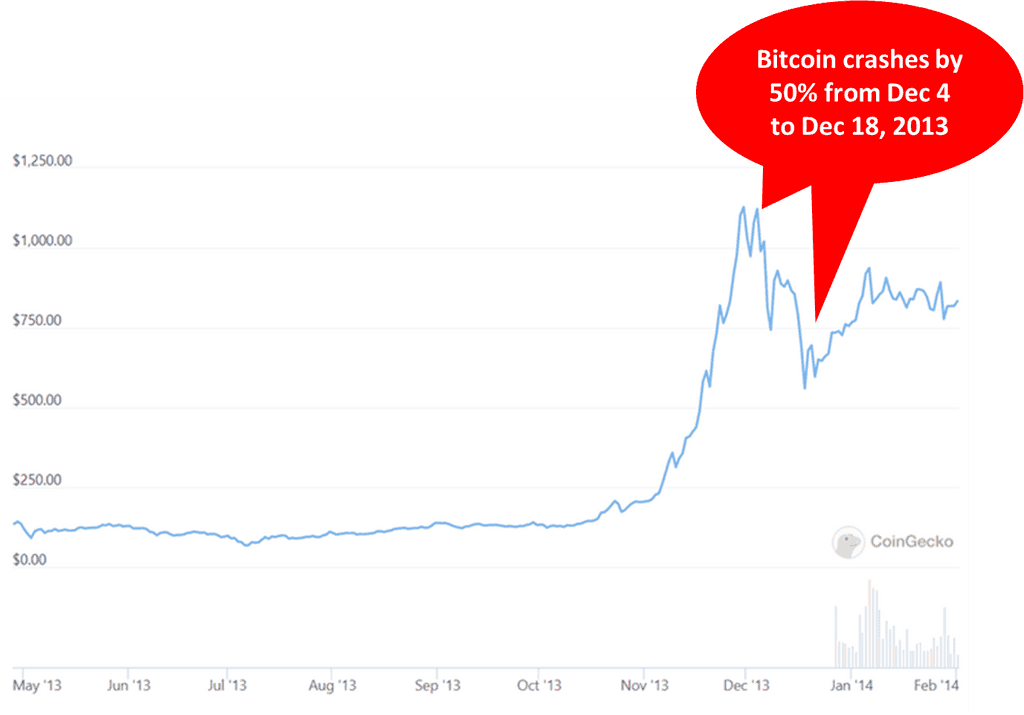 Source: The Bitcoin price chart from May 2013 to February 2014
(image source: www.coingecko.com/en/coins/bitcoin, with an added annotation)

On January 15, the cryptocurrency started recovering the lost ground. The two-day crash resulted in an overall decline of 33% from the January 12 price ($268) to the January 14 price ($178).


The crashes outlined above were all short-term events, lasting mere hours (for the June 2011 wipe-out), two days (January 2015), and two weeks (December 2013). Before 2018, Bitcoin had not experienced anything close to a prolonged decline, which is typically termed a “bear market”.

It was throughout 2018 when Bitcoin, for the first time in its history, got the taste of a true, sustained bear market.

After having some wild ups and downs in the preceding weeks, Bitcoin started a consistent fall from the $18,344 USD price on January 6, 2018.

Despite experiencing shorter-term recoveries along the way, Bitcoin was largely on a downward trend throughout the entire year. It only stopped the consistent fall in mid-December of that year, at a price point of $3,222 USD. The slow and anemic recovery 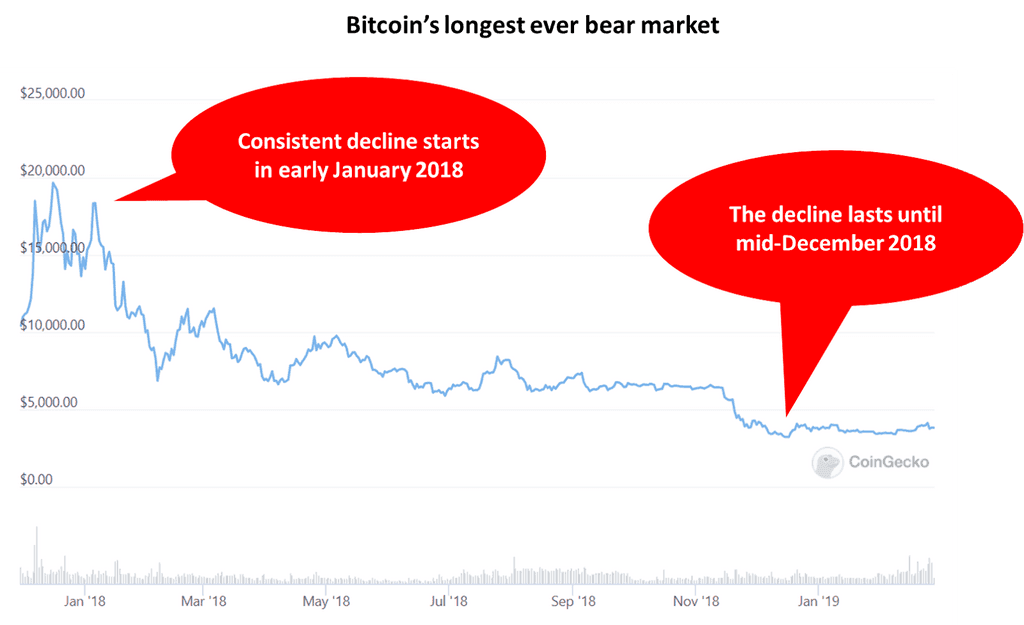 The 2018 bear market led to an 82% decline in the value of Bitcoin from the early January highs to the prices of mid-December. The market of the year 2018 remains the longest sustained decline for Bitcoin, and has been dubbed by some as “the crypto winter of 2018”.


While the 82% decline throughout 2018 sounds brutal, it was a market development lasting nearly a year. At the same time, Bitcoin has seen its fair share of one-day crashes. Excluding the June 2011 Mt. Gox price wipe-out caused by a hacker attack, Bitcoin’s largest one-day fall was recorded on March 12, 2020, affectionately labeled Black Thursday by some.


Supported by wide-spread market optimism, Bitcoin reached a high of $63,577 USD by mid-April last year. It then came crashing down in the following 3 months, reaching a low of $29,972 USD by July 21.

Among the relatively longer-lasting Bitcoin crashes, this decline of 53% remains one of the largest.

This is another historically prominent crash in the price of Bitcoin. The current crash is still ongoing, and further losses are predicted by many analysts. As of now, Bitcoin has not found a stable floor yet in the ongoing carnage.


If the past is any indication of the future, there will likely be more volatility in the crypto market, and especially with Bitcoin, as BTC is generally what moves the whole market. Through these up and down swings many traders typically either buy or sell depending on their investment strategy, and with Gate.io you can also take advantage of Bitcoin market moves in a way that meets your investment strategy and needs.

You can buy and sell Bitcoin on the Gate.io exchange as well as learn more about the different available pairings that are available on our platform. Thanks for reading and stay tuned for more updates on our blog as Bitcoin continues to gain worldwide adoption and the crypto space continues to develop.

Author: Gate.io Researcher: Chuk. U
Disclaimer:
* This article represents only the views of the observers and does not constitute any investment suggestions.
*Gate.io reserves all rights to this article. Reposting of the article will be permitted provided Gate.io is referenced. In all other cases, legal action will be taken due to copyright infringement.

In-Depth Analysis of the "Mt. Gox Incident" from 7 Years Ago: Could the Compensation Package be the Catalyst for a Major Bitcoin Sell-Off?
How To Profit From a Bear Market
Will Bitcoin Go Back Up？