- Kanye West has been known for his hardline comments on NFTs and the metaverse the highlight of which was his letter posted on Instagram early this year telling his fans not to ask him to do NFTs.
- One of the reasons West gave then was that he would focus on building real projects in the real world taking a swipe at digital assets.
- In what appears to be a U-turn, Ye filed multiple applications for patents to cover some goods and services including NFTs.
- It is only logical for Ye to give NFTs and the blockchain some thoughts considering his many troubles with brand royalties and zero tolerance for disrespect of talents.
- Many people have argued that his recent step may not be taken as a concrete action to roughshod into the metaverse and NFT space, but there are some pointers to that. 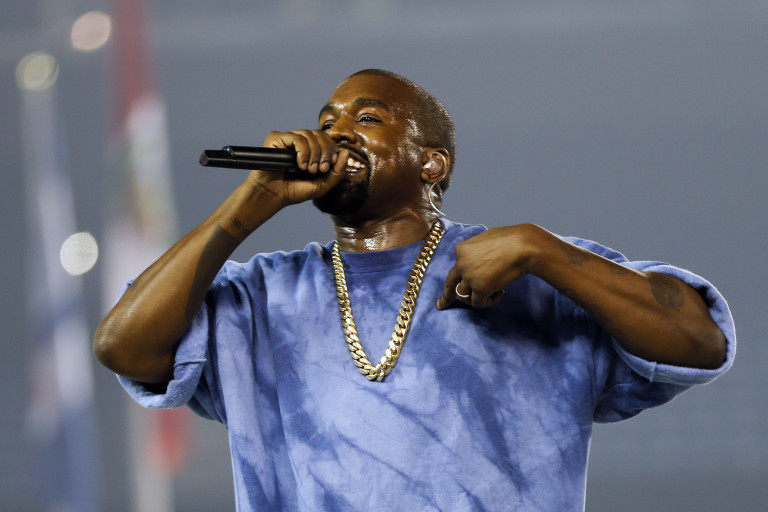 The Billionaire American rapper and entrepreneur, Kanye West has been at the center of news making the rounds recently with regards to NFTs. Ye as he is now called filed 17 new trademark applications around last month with the US Trademark and Patent office. He listed NFTs in one of the filings with other goods and services such as managing performing artists and professional athletes. The applications which were filed on a 1b basis indicate Kanye’s intent to use the trademark in the future. According to the standard, trademarks already in use are filed on the 1A application. Trademark applications for NFT brands in the US increased from 20 in 2020 to more than 1400 in 2021 according to the record from the US Trademark and Patent Office. With this recent move by Kanye West, he may well be joining other top celebrities such as Kobe Bryant, Jay-Z, and Shaquille Oneal who have filed trademark applications for NFTs. Trademark filing is a common way celebrities roughshod into the NFT space making an initial claim as the practice of launching their projects or giving endorsement to others electrifies the industry.

Kanye West and his initial reservation for NFTs


Early this year, Kanye West posted a handwritten letter on his Instagram feed in what appeared to be a resistance to NFTs. The American rapper who later deleted the posts relating to NFTs on his Instagram told his fans in the letter to stop asking him to do NFTs asserting that he would rather focus on building real products in the real world. The tone of the letter portrayed an outburst and exasperation. The outburst can easily be deduced from the way the letter was written in all caps. Kanye West was however equivocal when he ended the letter by saying, “Ask me later.” Digging deeper, his outburst might be said to be provoked by the inundating requests by crypto companies, fans, and shills that he should promote their products or create his own NFTs. Kanye is known for his penchant for being unique and protecting his brands as could be seen in the way he goes about his alter ego, Yeezus. His initial resistance could therefore be understood as a resolve to be different from celebrities who promote crypto projects they know not much about. 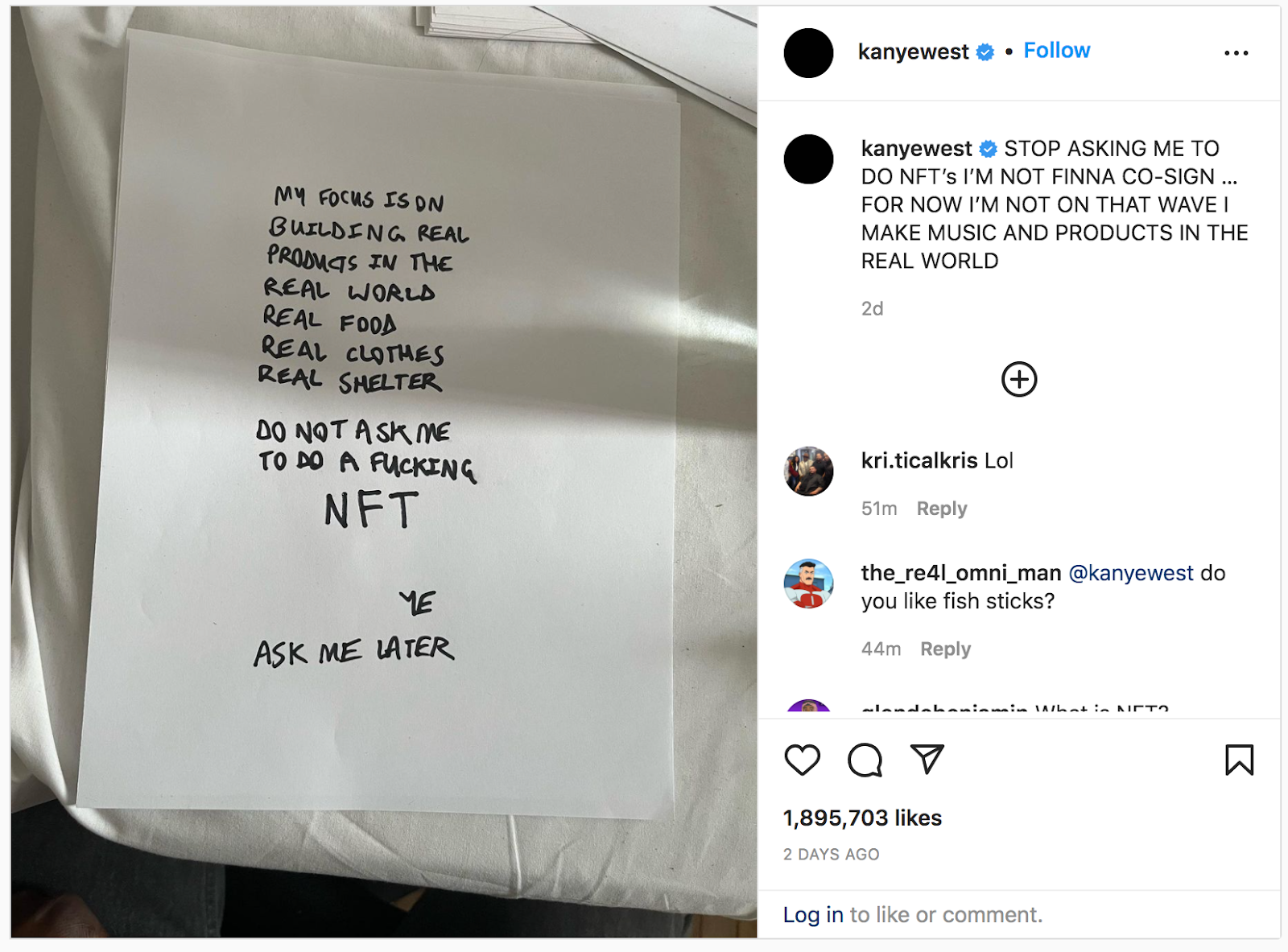 Why is Kanye West now fond of NFTs and Metaverse?


Kanye West has been mulling over NFTs as a business-minded celebrity. He has been having some troubles with patent rights and royalty over the years. He departed his brand, Yeezy’s partnership with Nike over the failure of the latter to pay him royalties for his own shoe. After leaving Nike, he partnered with Adidas, a deal that positioned him as a retail force to be reckoned with. Recently, Kanye has also been having issues with the German sportswear giant, over what he described as disrespect to the talent. He accused the company of "blatant copying" in the new Adilette 22 slides released by the company which bear some features similar to that of the Yeezy Slide from his own Adidas line. Against the backdrop of these trademark and royalty issues, Ye might have turned to NFT for the promises it holds- which may be a step towards creating a fully fledged and independent brand.

NFTs bring art and technology together. Blockchain-based NFTs provide patent holders the mechanism to manage the licensing and ownership of their patents. Many have also pointed to the fact that tokenizing patent assets will allow them to be easily traded and commercialized. The immutable nature of the blockchain will be instrumental in automating royalty collecting methods and keeping records of revenue associated with patent assets. Some other benefits include transparency and creating windows for fractional ownership which may allow smaller investors to purchase pieces and batches of the patent as NFTs. The self-executing contracts which are built into many of the NFTs give the buyer all the right to the contract and the right to sue for infringement along with the other benefits which might have contributed to the driving impulse that makes Kanye not be able to look away.


Kanye made the recent multiple filings for patents through his Mascotte Holdings Company. Some of the fields of use Kanye listed in the filings include video game software, Christmas tree ornament, retail stores, board games, and plush toys among others. Specifically, he listed non-fungible tokens together with other stated goods and services as well as the operation of a digital marketplace for trading blockchain-based NFTs, currencies, tokens, assets, and collectibles.


While many have said the move by Kanye West is not yet a definite step toward his adoption of NFTs, it can be argued that there are many pointers in that direction. It is only logical for Kanye West to consider NFTs looking at his recent concern over infringement on his brand by his partner company. This does not mean there are not some considerations yet to give him some reservation. There are still few laws and regulations dealing with NFTs which portend a significant risk with transferring patents as NFTs until these laws are developed further.

The issue of chain of title is another major concern that cannot be wished away. A US patent assignment, grant, or conveyance, for example, is expected to be recorded in the US Patent and Trademark Office within three months of the conveyance date; else, the prior unrecorded conveyance is void against any subsequent purchaser. This provision may raise the question of how to represent the transactions of patent assets before various IP offices if they are freely traded through blockchain technology.


Beyond just patents, some of the things that will further address the concern of bigshots like Ye is building infrastructure that supports better user experiences and onboarding, cheaper transactions, and a reasonable privacy guarantee. Some of the flaws of the present system are the scaling challenge of delayed withdrawal on layer 2, layer 1 protocols’ struggle with maintaining uptime, and limited privacy guarantee. Ye may be looking at bringing along solutions to these challenges as he takes the initial steps towards hopping on the bandwagon of NFTs and the metaverse. We just never can tell.