More article in the group

The smart contract will aggregate users' token deposits, determine the interest rate by the algorithm according to the supply and demand relationship in the market, and then lend the tokens based on the borrower's mortgage assets. This mode is called "Lending & Single-Asset Vault".

Gate.io's Lending & Single-Asset Vault is a type of Liquidity Mining, but the former is simpler and easier in operations. Liquidity mining involves two coins, and users earn income from transaction fees and incentives. Lending & Single-Asset Vault involves a single coin, and users earn from lending interests. The interest rate varies according to the demand and supply of currencies. Specifically, when the liquidity is insufficient, the interest rate will rise to encourage lenders to deposit. On the contrary, when the liquidity is abundant, the interest rate will fall to encourage borrowers to borrow. There should always be some kind of balance in the pool in order to make it sustainable.

In a nutshell, Lending and Single-Asset Vault is a kind of hybrid between a CeFi and a DeFi lending service, as it combines the ease of use of the former with the decentralization of the latter. 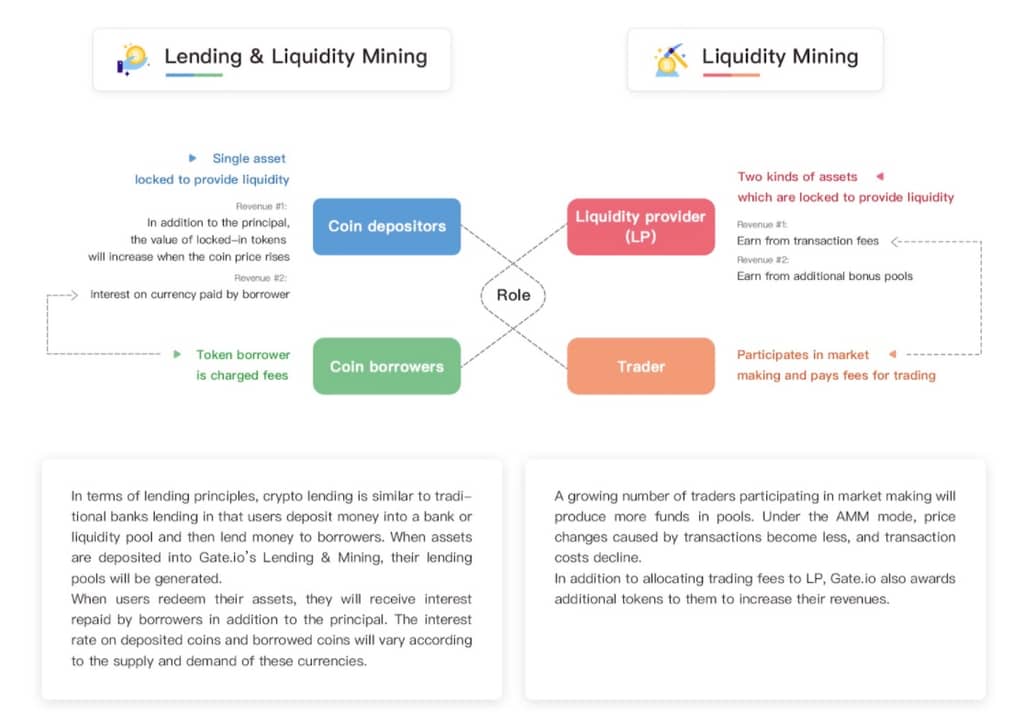 In a nutshell, Lending and Single-Asset Vault is a kind of hybrid between a CeFi and a DeFi lending service, as it combines the ease of use of the former with the decentralization of the latter.

How can users get returns from Lending & Single-Asset Vault?

The liquidity that users add to the Lending & Single-Asset Vault pool will be aggregated by the system and lent to borrowers. The loan interest paid by the borrower will be distributed to the depositors as income according to the proportion of liquidity. *Return of rate = income / principal x 100% x holding days

Featuring decentralization and a high yield of DeFi projects, Gate.io Lending & Single-Asset Vault also enjoys the security and convenience characteristics of CEX. Users who directly participate in the DeFi mining may experience a cumbersome process that requires them to manage wallets and their private keys as well as to pay high gas fees. In addition, it’s necessary for users to accurately identify projects to avoid code vulnerabilities and project bankruptcy. That is extremely risky. In contrast, participation in Gate.io Lending & Single-Asset Vault has the following advantages.

Secure and Reliable
The Gate.io platform, which has always taken security as the core of its services, is more trustworthy than any other DeFi project which is frequently attacked every other day. Gate.io has been ranked second in terms of security by a third-party security testing laboratory that has tested the security of 100 cryptocurrency exchanges around the world. Relying on a highly secure platform for lending and liquidity mining, investors can effectively avoid project risks.

Convenient and Fast
When investing in lending & mining in decentralized projects, investors often need to learn more about them and perform complicated tasks and if something goes wrong in the operation process, there is the risk of failing to retrieve funds from the contract address. With Gate.io’s Lending & Liquidity Mining, you can become a liquidity provider and earn gains in just a few simple steps. What’s more, the principal and yields can be withdrawn at any time.

High Revenue
Gate.io's Lending and Liquidity Mining aims at higher returns and calculates the interest rate based on algorithms. The recent project with high yields will be mentioned in the relevant announcement on a daily basis.

Wide Range of Token Types
Since its inception, Gate.io has launched more than 1,000 trading pairs, making it the world's largest exchange for crypto coins. It was recently ranked first for Altcoins by Coin Clarity and was called an “Altcoin Hunter’s Dream”. Gate.io offers a wider variety of coin pairs for users to pick and choose from based on their positions. Gate.io offers users many lending pools. So far, Gate.io has launched 347 single-asset lending liquidity pools, and more pools are being added daily. Users can choose according to their positions.

DeFi: DeFi (Decentralized Finance) usually refers to a blockchain-based decentralized application (DApp) and decentralized exchange. It enables decentralization of the payment process, without relying on centralized financial intermediaries. For example, a third-party financial institution often charges a fee as payment during money transfer, whereas in DeFi applications, money can be sent directly to the designated wallet without any intermediary fees. Therefore, DeFi technology is mostly used in payment and lending cases.

Liquidity Mining: In the automated market maker model, algorithmic robots simulate trading behaviour in the market to provide liquidity to the market. Every market that supports AMM has a corresponding funds pool in which market-making funds will be provided for AMM. The quotation of the AMM is determined by the ratio of the two coins in the pool, and the product of the two coins' amount will remain the same when trading. This model is also called Constant Product Market Maker.
Users can become Liquidity Providers (LP) by providing liquidity to the pool, indirectly becoming a market maker and earning commission dividends from trading fees, which is known as liquidity mining.

Liquidity: Liquidity usually refers to market liquidity. Specifically, it is the speed at which a transaction is concluded or the ability of market participants to make a transaction at the market price without causing large fluctuations in the market price. An active trading market must have good liquidity in order to quickly match the buying and selling of different trading volumes and trading prices. By observing the 24-hour trading volume, order depth and bid-ask spread, users can roughly judge whether the market has good liquidity.

*Learn more at GateEarn:
What Is Lending & Single-Asset Vault?
What is Liquidity Farming?

Can't find the answer you want?Submit a Ticket

Can't find the answer you want?Submit a Ticket