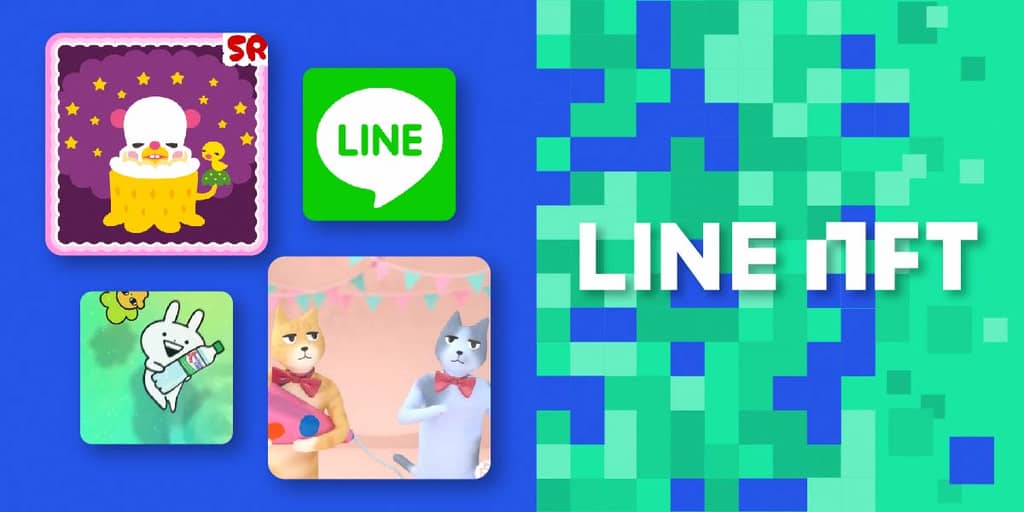 LINE is a Japan-based messaging app operated by LV Corporation and entirely owned by Z Holdings.

It was launched in 2011 and has had its user base surpass 700 million.

LINE can be used on various electronic devices, platforms and operating systems.

LINE has delved into the NFT space by launching its NFT marketplace called “LINENFT.”

An NFT is a unique digital asset, such as visual art, music, video game pieces, memes, etc. that are stored on a blockchain network.

NFTs are traded (bought and sold) on NFT marketplaces.

LINENFT is operational only in Japan.

About 4,000 tokens will be available in almost 200 countries worldwide, with up to 100 NFT collections functional.

Users can get their NFT via credit cards or crypto.

In addition to the LINENFT marketplace,

LINE also has its blockchain platform, token, and wallet. All of which work hand-in-hand.

Social media mirrors technology. And that is felt keenly in today's world, where the latest innovations in the tech community find their way to social media.

For the Japanese and Asian tech communities, LINE is a leading figure. And they've moved a step further forward by delving into the NFT space.

Let's take a look at everything about LINE and NFT:


What is LINE about?

LINE is the most prominent messaging freeware app in Asia. It is a Japan-based

ancillary of Softbank Group and the Seoul-based Naver Corporation, operated by Line Corporation and owned by Z Holdings.

Launched in 2011, it quickly became Japan's go-to messaging app as it was adapted to Japanese consumers' preferences. After a series of intelligent and massive marketing methods, LINE's consumer numbers hit astronomical figures (at least more than 700 million.)

With it, you can exchange texts, pictures, video, and audio and execute free VoIP discussions, voice calls and video meetings. Furthermore, LINE enables you to engage in digital services like online comics, e-wallets, and video on demand.

After starting as merely a Japanese app, LINE has morphed into the most popular app in Taiwan, Thailand, Indonesia, and other countries in Asia. It merged with Yahoo! Japan, an Internet company, and plans to compete against global tech giants like Google, Apple, Facebook, Rakuten, Alibaba, Baidu, etc.

In the light of this ambition, LINE has delved into the NFT space by launching its NFT marketplace called “LINENFT.”

Before we talk about it, let's briefly look at what NFTs mean and the NFT marketplace.

The NFT space is a distinct and innovative aspect of the tech world, and it is part of the next-gen features of the internet as powered by blockchain. Other examples are crypto, smart contracts, DAO, etc.

NFTs are purchased with cryptocurrency, stored in crypto wallets, and traded on the "NFT marketplace." As the name suggests, it is an environment where you can easily buy or sell NFTs.

Now, let's ease into the crux of this article.

The global number of NFT traders and its trading volume have significantly improved from the past year, when it gained widespread acceptance, till now.

Little wonder why LINE is making admirable strides in it. However, it is essential to note that this isn't LINE’s first rodeo in the blockchain world.

In 2018, they started the “LINE Blockchain Labs,” a company assigned to study and analyze the usages of blockchain technology.

Next, LINE formulated and launched its blockchain network and token, called “LINE blockchain” and “LINK(LN),” respectively.

They have launched their NFT marketplace, called "LINENFT," which will operate on their blockchain network.

It is a deliberate and strategic move from LINE to position itself smartly in the tech space.

Now, let's talk about the LINENFT marketplace, which was recently launched.

LINENFT is LINE’s marketplace where you can buy LN (LINE tokens.)

It functions on the LINE blockchain network and is regulated by the LVC corporation, the company’s attendant in charge of its blockchain pursuits, which Z Holdings owns.

It is reported that there are around 40,000 tokens available with hundreds of types ranging from comedy works, character videos, anime series, dedicatory NFT on Olympic gold medalist Kohei Uchimura, and limited pieces from Manga artist Yashiro Azuki, to name a few.

You can buy the tokens (LN) with your credit card or via crypto (Bitcoin, Dogecoin, Ether, Litecoin, etc.) Afterwards, you can store them on your LINE wallet, which can be effortlessly registered via your LINE account.

You can easily exchange the LINE NFTs with companions who are also registered LINE customers, and there are reports that LVC intends to, in the future, collaborate with LINE family services and other group companies to provide users with different types of NFT experiences.

Furthermore, LINE started an NFT campaign to promote the launch of the LINENFT marketplace. In it, 1,000 users will be given an “Amazon gift certificate” of 10,000 yen by disclosing an NFT number, which each user receives after opening their account.

LINENFT was launched in April 2022 and is expected to herald great things for the NFT community in Japan and worldwide.


Without a doubt, the NFT space is becoming more lucrative at a fast rate. Total NFT sales were capped at $19 billion in 2021, and now they are projected to reach $30 billion in 2022.

LINE has made strides in the social media community and has taken it further with NFTs.

They have created their blockchain platform, LINE; token, LN; wallet, LINE wallet; and NFT marketplace, LINENFT, which will aid in seamless NFT trades for LINE users.

Author: Valentine. A, Gate.io Researcher
This article represents only the researcher's views and does not constitute any investment suggestions.
Gate.io reserves all rights to this article. Reposting of the article will be permitted provided Gate.io is referenced. In all cases, legal action will be taken due to copyright infringement.

ETH -0.14%
BTC + 1.83%
GT + 0.01%
Share with：
Follow us：
Trending
UST Decoupled from the US Dollar and LUNA Slumped by 60%
Luna Fell by More than 95% in a Single Day. What Is the "Death Spiral" Leading to Hell?
The Whole Story of Musks Acquisition of Twitter
Optimism Released an Article to Recall the Course of the Project, Maybe Will Airdrop Management Tokens
Luna Chain Reaction Poses Significant Capital Loss, and the Security of DeFi Financial Products Initiates Dispute
Claim 20 Point now
Exclusively for Newcomers: complete 2 steps to claim Point immediately!