1. On April 25, Twitter's board of directors announced its acceptance of Musk's acquisition proposal for Twitter at a price of $54.2 per share, with a total amount of approximately $44 billion.

2. On March 25, Musk launched a vote on Twitter to ask netizens about their attitude towards freedom of speech, building momentum for the acquisition of Twitter.

3. On April 4, Musk was exposed to hold 9.1% of Twitter and was invited to become a member of Twitter's board of directors.

4. On April 14, Musk officially announced that it would acquire Twitter and carry out a series of substantive reforms, including adding Dogecoin payment options to Twitter.

On April 25 local time, Twitter's board of directors announced that it had reached a final agreement to sell the company to an entity wholly owned by Tesla CEO Musk at a price of $54.2 per share. With the total amount of acquisition reaching approximately $44 billion, once the transaction is completed, it will become one of the largest privatization transactions in history.

The deal is expected to be completed within this year. After the deal is completed, Twitter will become a privately owned company.
But according to Bluesky, Twitter's Web 3 social media project, said Bluesky would continue to operate independently even if Twitter was successfully privatized. After the news, Twitter shares closed up 5.66% to $51.70. In the meanwhile, the price of dogecoin also swept away the decline for many days and increased by more than 30%, which is obviously related to Musk's identity as the "Godfather of Dogecoin". The prices of other major cryptocurrencies, including Bitcoin, also increased to some extent.

Unlike ordinary mergers and acquisitions, privatization transactions require the acquired listed companies to delist and turn into private companies. After the completion of this acquisition, Twitter (TWTR. US) may also face delisting. 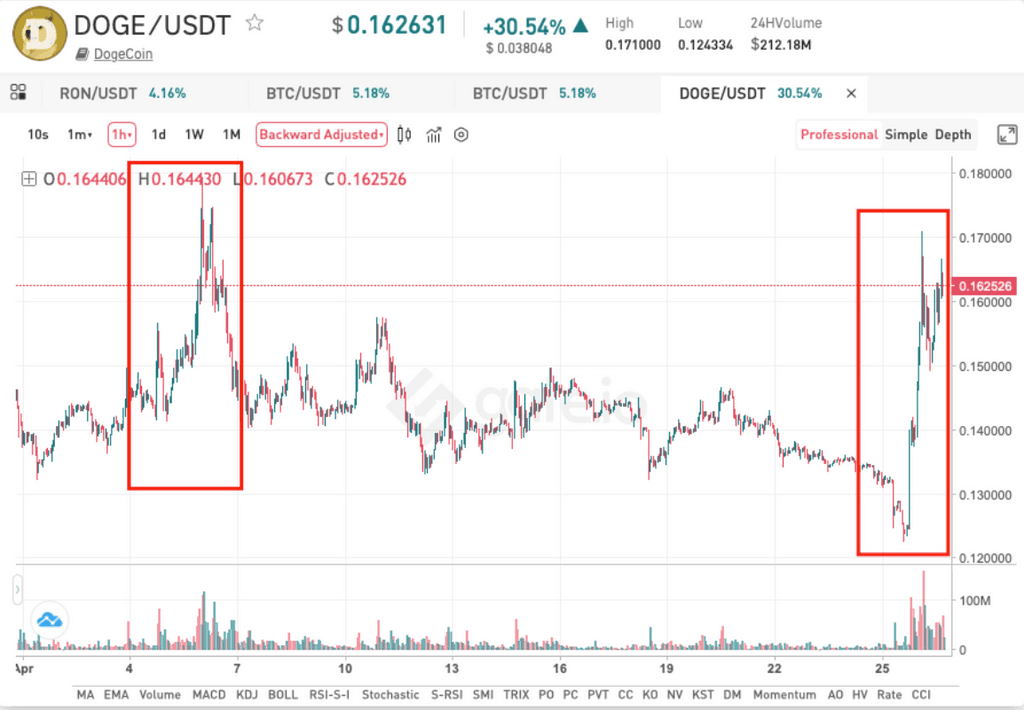 
Musk's acquisition of Twitter has obviously been carefully planned and elaborately prepared. 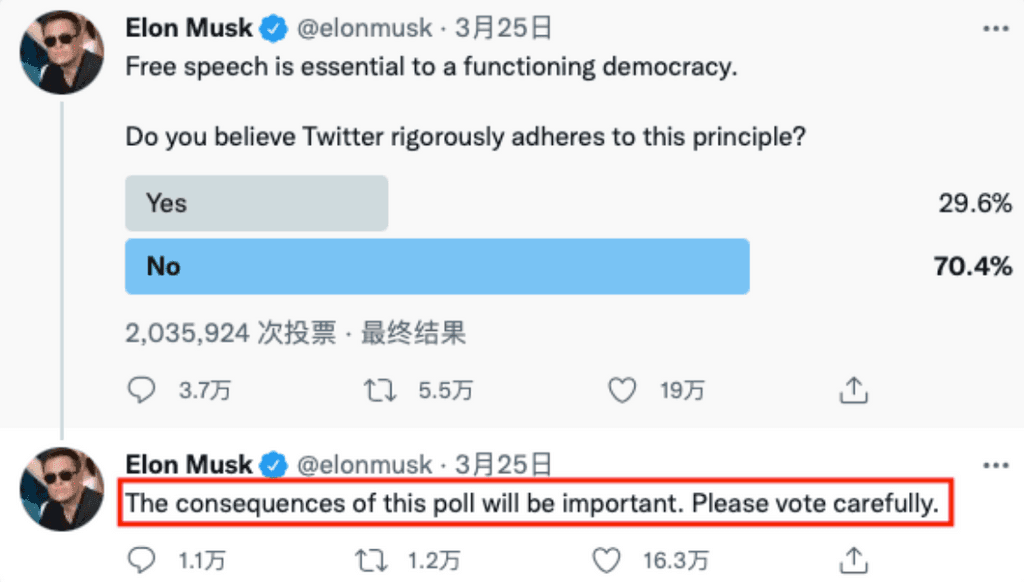 On April 4, the Securities and Exchange Commission disclosed that Musk held 73.4869 million ordinary shares of Twitter, accounting for 9.1% of ordinary shares, becoming the largest shareholder of the company. On April 5, Twitter officials also stated that Musk would be invited to join the Twitter board of directors. But Musk's ambition obviously goes beyond that. What he wants is the control of the whole Twitter. Therefore, he rejected the appointment of a director from Twitter and announced on the 14th that he would fully acquire Twitter at a price of $54.2 per share. He also said that this price is the highest price he can offer, because he believes that with the current operation mode of Twitter, it is impossible to raise the share price to $54.2, which is 54% higher than the day before Musk invested in Twitter.

Musk said that after his successful acquisition of Twitter, he would carry out a series of substantive reforms. He said he did not buy Twitter to make money, but to realize the freedom of speech in the digital world he wanted to achieve. For example, reduce the salary of Twitter's board of directors to zero so as to save huge expenses every year; add editing function for published tweets; open source Twitter source code for everyone to access and check; And what is most concerned by the crypto community is to add Dogecoin payment options to Twitter's advanced sub_script_ion services.

At that time, most analysts thought it was another joke Musk played on the market. Because this transaction requires cash payment, even if Musk is a fortune tycoon, it is difficult to raise it in a short time. On August 7, 2018, Musk said that he was considering privatizing Tesla at the price of $420 per share to reduce the impact of share price on the company's operation. This news triggered a sharp rise in Tesla's share price on the same day, and only 17 days later, Tesla officially announced the cancellation of the delisting plan.

The acquisition news on the 4th caused the price of dogecoin to soar, but gradually declined, which also reflects the market's attitude towards the acquisition. Some people think Musk can't raise enough cash to complete the acquisition of Twitter. Others think that Twitter's share price is undervalued. It's unreasonable to buy Twitter at $54.2 per share. In fact, Twitter does face operational challenges. Compared with Facebook (i.e. Meta), an old competitor, Twitter has only more than 200 million active users, only one tenth of the former. Compared with new entrants such as Tiktok, Twitter's business model is not novel and attractive enough.

Twitter's board of directors strongly opposed Musk's acquisition request. In response, the Board unanimously approved the "Poison Pill" against Musk's acquisition of Twitter on the 15th. The Poison Pill plan is an anti-takeover measure, also known as the shareholder equity plan, which began in 1985. When the company is maliciously acquired, it can dilute the shares held by the acquirer and increase the acquisition cost by issuing a large number of preferred shares to other shareholders of the company at a discount price.

However, Musk is still actively preparing for the acquisition. Since a large part of his assets are Tesla shares, and a large number of shares sold will undoubtedly affect Tesla's share price, he chose to mortgage Tesla shares to obtain loans. He received $25.5 billion in debt financing from Morgan Stanley, Bank of America and Barclays, including $12.5 billion in margin loans secured by Tesla shares and $21 billion in equity financing, totalling $46.5 billion.

After the funds were guaranteed, the attitude of Twitter's board of directors began to reverse. On the 25th, Bret Taylor, chairman of Twitter, said that the board of directors had deeply considered Musk's acquisition proposal and believed that the acquisition could bring considerable cash premium to shareholders and was the best choice. Meanwhile, Twitter also signed a "reverse breakup fee" agreement with Musk. If Musk gives up the acquisition halfway, he will need to make compensation.

Another interesting thing is that in this acquisition, Jack Dorsey, the former CEO and founder of Twitter, is the most supportive of Musk. Dorsey himself is believed to have resigned as CEO after being "forced" by the Twitter board of directors. After Twitter officially accepted the acquisition, Dorsey released several tweets to express his support for the acquisition. He believes that the current Twitter has been controlled by Wall Street, which deviates from the original intention when he founded, and Musk's entry into Twitter is expected to make Twitter move in the right direction. 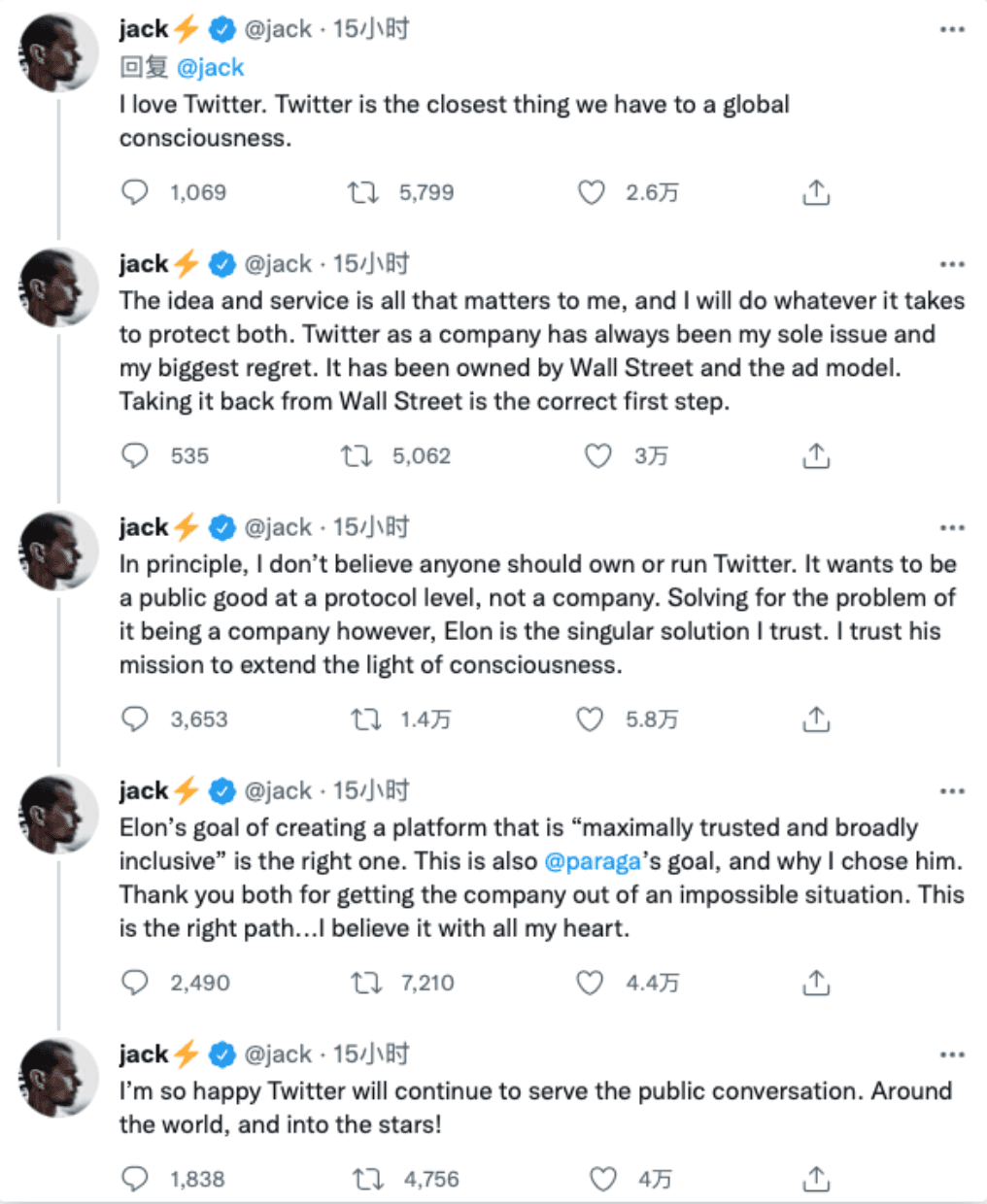 Musk is good at taking advantage of the momentum and promoting public opinions. With the completion of Twitter acquisition, Musk's influence on the crypto world and even the whole online world will undoubtedly further increase. This may be good news for the crypto community. Maybe soon, new concepts such as NFT and dogecoin will be more widely used on Twitter.

Author: Gate.io Researcher: Ashley H. Translator: Joy Z.
* This article represents only the views of the researcher and does not constitute any investment suggestions.
*Gate.io reserves all rights to this article. Reposting the article will be permitted provided Gate.io is referenced. In all other cases, legal action will be taken due to copyright infringement.

Gate.io Featured Articles
Zuckerberg’s Stablecoin Dream Shattered: Libra To Be Sold
Why Is META （Previously Facebook）Betting Big On Metaverse?
Optimism Released an Article to Recall the Course of the Project, Maybe Will Airdrop Management Tokens

BTC + 3.99%
DOGE + 0.93%
Share with：
Follow us：
Trending
Crypto market will be in upheaval in September. How will investors survive?
What Is the LUNC Tax Burning Proposal?
What Is the Future of Ethereum?
High Possibility of a 75 Point Rise in Federal Fund Rate in September
Daily Flash | Hacker Returns 70% of the Funds Stolen From Transit Swap DEX, US Stocks Have The Longest Run of Quarterly Declines Since 2008
Claim 20 Point now
Exclusively for Newcomers: complete 2 steps to claim Point immediately!