Gate.io Blog Will Layer 2 and the Future Sharding Update to be Activated in 2022 be Ethereum’s Ultimate Solution to Boost Scalability?
Crypto 101

Will Layer 2 and the Future Sharding Update to be Activated in 2022 be Ethereum’s Ultimate Solution to Boost Scalability?

[Outline]
1. On December 2, Vitalik Buterin, the founder of Ethereum, celebrated the birthday of the Beacon Chain and released the development roadmap of Ethereum protocol in the future.
2. After The Merge, the previous content on the PoW Chain will be transmitted to the Beacon Chain on which the blocks will directly process the transaction information.
3. Ethereum has also developed a scaling solution centered on Sharding and Rollups. When it is successfully implemented, the solution will offer incredible improvements to transactions per second as well as solve the current issue of high transaction fees.
4. The Sharding and the Beacon Chain will be launched synchronously to be the basic structure of Ethereum 2.0, which will be linked to L2s with different structures.
5. Sharing technology can offer greatly-improved performance at the expense of less security.
6. The current handling fees of the Rollup project have been greatly reduced. They will be further lowered after the sharding technology is officially applied.
7. In the long run, Layer 2 and Sharding may be the only solution to achieve high-performance scalability. Therefore, it could be regarded as the ultimate solution for Ethereum.

On December 2, Vitalik Buterin, the founder of Ethereum, celebrated the birthday of the Beacon Chain and released the follow-up roadmap of Ethereum.
The Beacon Chain, using the PoS consensus mechanism, has been coexisting with the Ethereum mainnet, using the PoW consensus mechanism, since its launch on December 2, 2012. Users can be validators on the chain by staking ETH. Shortly, the entire Ethereum will complete its transition to the PoS mechanism, which is also known as "The Merge". This will be a seamless transition process during which the previous content on the PoW chain will be transmitted to the Beacon Chain and blocks on the Beacon Chain will directly process the transaction information. 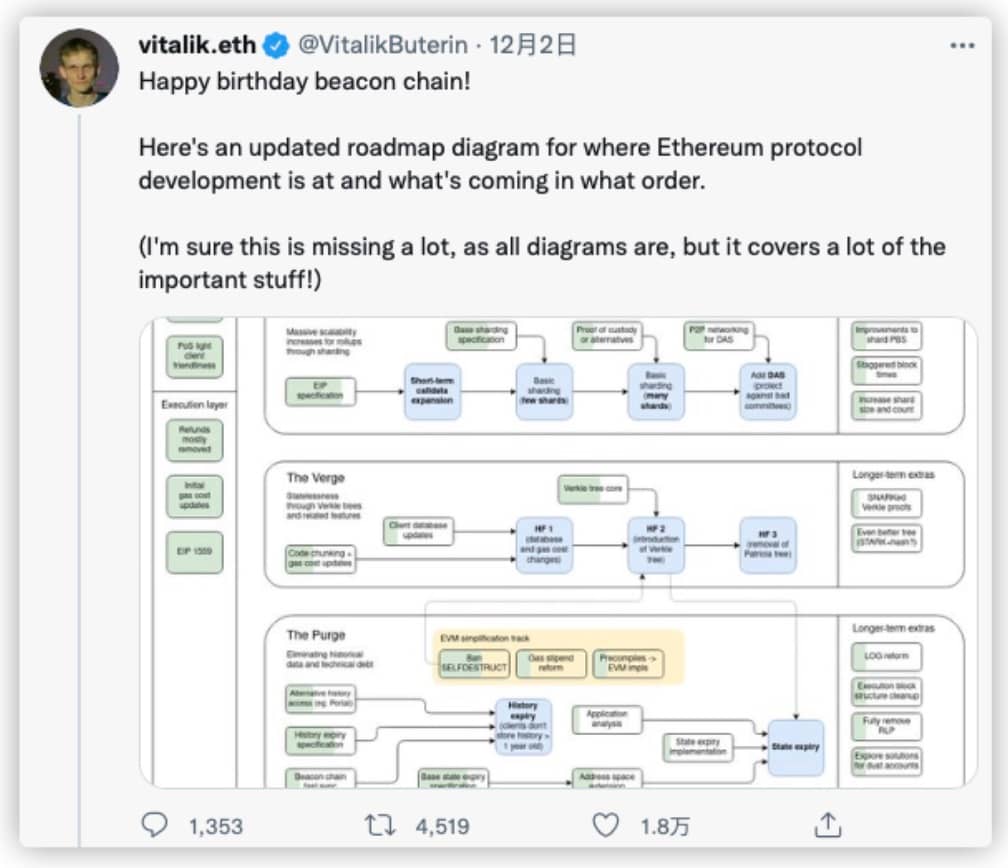 It is expected that the overall energy consumption of the Ethereum network will drop by 99.95% after the transition to the PoS consensus mechanism, thus solving the previous controversial energy consumption issue under the PoW consensus mechanism. Meanwhile, the Ethereum network is expected to be more decentralized because Ethereum's hardware will demand less for nodes under the PoS mechanism.

Moreover, Ethereum has also developed a scaling solution centered on Sharding update and Rollups. When it is successfully implemented, the solution will offer incredible improvements to transactions per second as well as solve the current issue of high handling fees.

The Beacon Chain and Shard Chains will be launched synchronously to be the basic structure of Ethereum 2.0. The Sharding, which is a solution to scaling Layer 1, is somewhat similar to Polkadot's cross-chain technology. In Polkadot, the Relay Chain is linked to the major parallel chains through slots. The major parachains, which can be different in structures, are secured by the Relay Chain. In Ethereum 2.0, the Beacon Chain also plays a role in connecting the major shard chains. But unlike Polkadot, the Ethereum shard chains are the same in structures and connected to L2s with different structures beyond the entire "Beacon Chain + Shard Chains" structure. As a result, a "Beacon Chain + Shard Chains + Layer 2" Ethereum system is formed.

For more about Layer 2, go to our blog article at Essentials for Crypto Newbie: What Is Layer 0, Layer 1 and Layer 2? to learn.

The Sharding stems from the database sharding technology, and the mentioned Sharding in this article also mainly belongs to data sharding.

Connected to 64 shard chains, the Ethereum Beacon Chain has a processing capacity that is conservatively estimated to be 64 times that of Ethereum 1.0. The number of initially planned shard chains is up to 1024. Among them, the major shard chains are relatively independent, and their Ethereum addresses will break into multiple categories based on the initial letters. Each shard will process transactions from the same type of address. Therefore, each node only stores a part of all transactions on the Ethereum network and only verifies the part it controls.

If a node needs to use the data stored on other nodes, it can communicate and coordinate through the Beacon Chain mainly to obtain the hash root of other shards. However, this kind of communication only takes place every 6 minutes in order not to burden the Beacon Chain. In the meantime, the Beacon Chain also distributes verifiers to the shard chain by generating random numbers. By doing so, the Beacon Chain secures the major shard chains.
Sharing technology can offer greatly-improved performance at the expense of less security.

As mentioned above, the current Sharding used by Ethereum belongs to data sharding. As a result, each shard chain only provides data capacity and does not deal with transaction processing or run smart contracts. In fact, the latter two tasks will be done by Layer 2, especially Rollup. Rollup refers to a kind of technology that is used to collect a batch of transaction information and put them into the call data of a transaction. Afterward, the technology will periodically package them into a block and submit them to each major shard chain (Layer 1) to complete the record. At present, each shard can provide about 250kB of dedicated data capacity for Rollup. With 64 shards, the total capacity will reach 16MB. Moreover, the more shards used in the future, the larger the data capacity that Rollup can use, and the lower the operating cost will be.

For more about the categories and basic principles of Rollup, go to our blog article at Crack The "Impossible Triangle": Overview of Layer 2 Solutions
Arbitrum network and Optimistim, which belong to Op-Rollup technology, and Zksynk and Starkex, which belong to zk-rollup, are the current main Rollup projects. Some of these Layer 2 projects have already been applied. Arbitrum has not yet issued coins, while TVL can be comparable to Polygan in scale and dYdX is also a decentralized exchange built on the starkex solution.
The current handling fees of projects such as Arbitrum and Optimism are about 1/8 to 1/3 of the Ethereum main chain. And the fees will be further lowered after the sharding update is officially activated.

Conclusion
In the long run, Layer 2 and Sharding may be the only solution to achieve high-performance scalability. Therefore, it could be regarded as the ultimate solution for Ethereum. With the rapid growth of new-generation public chains such as Avax and Solana, which have high performance, the destiny of Ethereum relies on whether Layer 2 and Sharding can be activated as soon as possible.

Author: Edward.H, Gate.io Researcher
*This article represents only the views of the researcher and does not constitute any investment suggestions.
*Gate.io reserves all rights to this original article. Reposting of the article will be permitted provided Gate.io is referenced. In all cases, legal action will be taken due to copyright infringement.