🔹 Bitcoin and Ether struggled within range over the weekend. CBOE Volatility Index (VIX) remained below 20 while correlations to both cryptocurrencies began to decline to 0.44 and 0.39, from 0.67 and 0.69 a week ago, respectively. Trading volumes continued to decline during this period.

🔹 Friday, US jobs data revealed higher demand for workers (+263K) while unemployment remained the same (3.7%), implying the Fed may see the US economy as robust enough to sustain more rate hikes -- some analysts expect the Fed may take interest rate to 5%.

🔹 The topic of the Day: Michael Burry and Dr. Doom Warn of Extended Multi-Year Recession in US

🔹 Happenings of the Week: SBF told US policymakers he would appear before congress eventually but not now; Reddit Collectible Avatar minting hits all-time high; Genesis owes $900 million to another group of assorted creditors which tallies up to $1.8 billion…

Over the weekend, Bitcoin and Ether traded within a range as predicted last Friday due to a lack of volatility and decreasing volume. To learn more about where BTC and ETH stand, scroll down to the technical analysis section of this article as we explain in the depth the potential trap facing the two largest cryptocurrencies.

On the Macro front, data from last Friday revealed that US employers added more jobs than forecast and wages surged by the most in nearly a year. Nonfarm payrolls increased 263,000 in November, while the unemployment rate held at 3.7%. Average hourly earnings rose twice as much as predicted.

According to Seema Shah at Principal Asset Management who spoke with Bloomberg,

“To have 263,000 jobs added even after policy rates have been raised by some 350 basis points is no joke. The labor market is hot, hot, hot, heaping pressure on the Fed to continue raising policy rates. What is there in this jobs report to convince them not to take policy rates above 5%?”

Following the data release, the dollar inched higher Monday against most of its Group-of-10 counterparts, but still left a gauge of the currency’s strength near a five-month low. A surge in US Treasury 10-year yields fizzled out, while two-year rates -- which are more sensitive to imminent Fed moves -- remained slightly higher.

This week, Australia, Canada, and the US are slated to report on their respective balance of trade. Meanwhile, China will release its inflation rate on Friday. If you’d like us to cover some of this macro data, or to expand upon technical analysis, feel free to drop a message in our Reddit community. 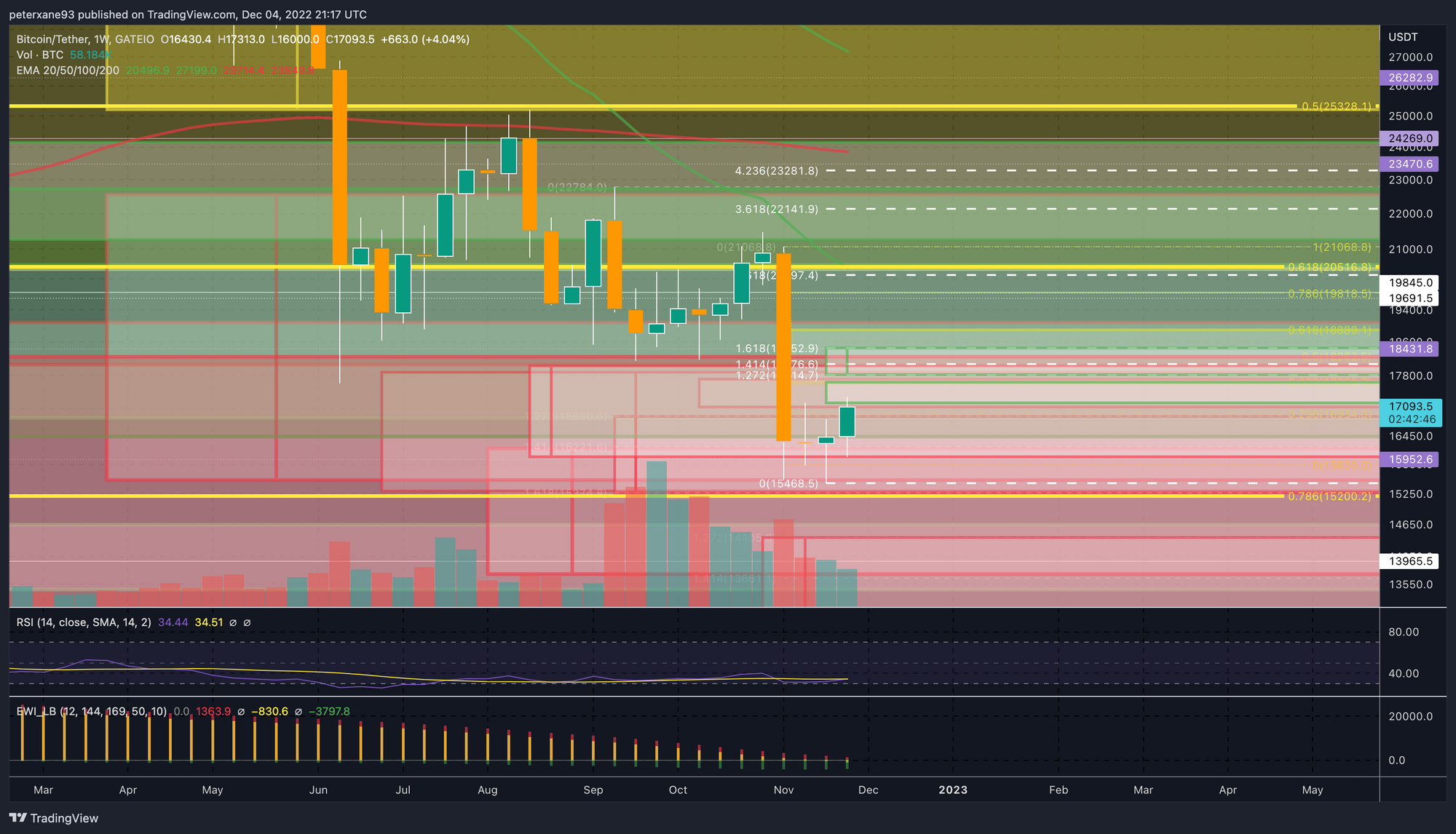 Note: As of this writing, there are two more hours left until a new candle forms on the weekly timeframe, and as it seems, the likelihood of BTC closing within the closest resistance zone is slim to none, implying a choppy session ahead going into this week.

However, as long as BTC remains above the nearest support zone, not all hope is lost as $16,430 was the entry of a buying zone on the weekly chart. 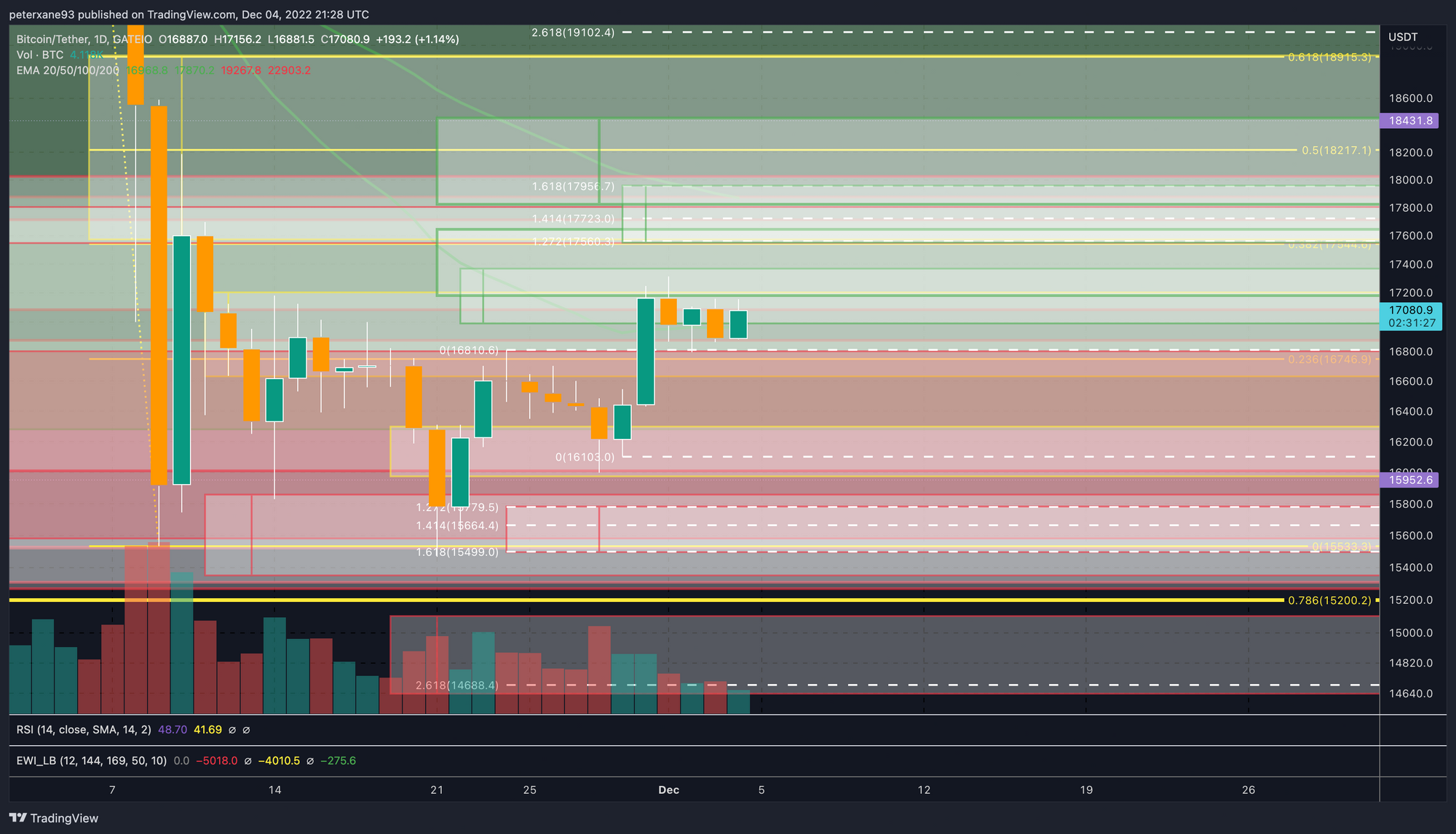 Note: The sluggish performance of BTC from the last four days established a tight range between $17,205 - $16,875, which in turn extended the strength of both the closest resistance and support zones well into Monday. Note: Like Bitcoin, with only two and half hours left until a new candle forms on the weekly timeframe, Ether is unlikely to close above the nearest resistance zone, which will affect its bullish performance going into this week.

A positive note is that the price of Ether has maintained above the 38.2% ($1,240) monthly Fibonacci Retracement level (measured from Oct. 2020 - Apr. 2021) throughout the past week, and although this is not a guarantee ETH won’t break below again, the last two times ETH hit this level it recovered at least 35% to the upside. However, there’s always a chance ETH rebounds in the opposite direction to the 50% level ($965). 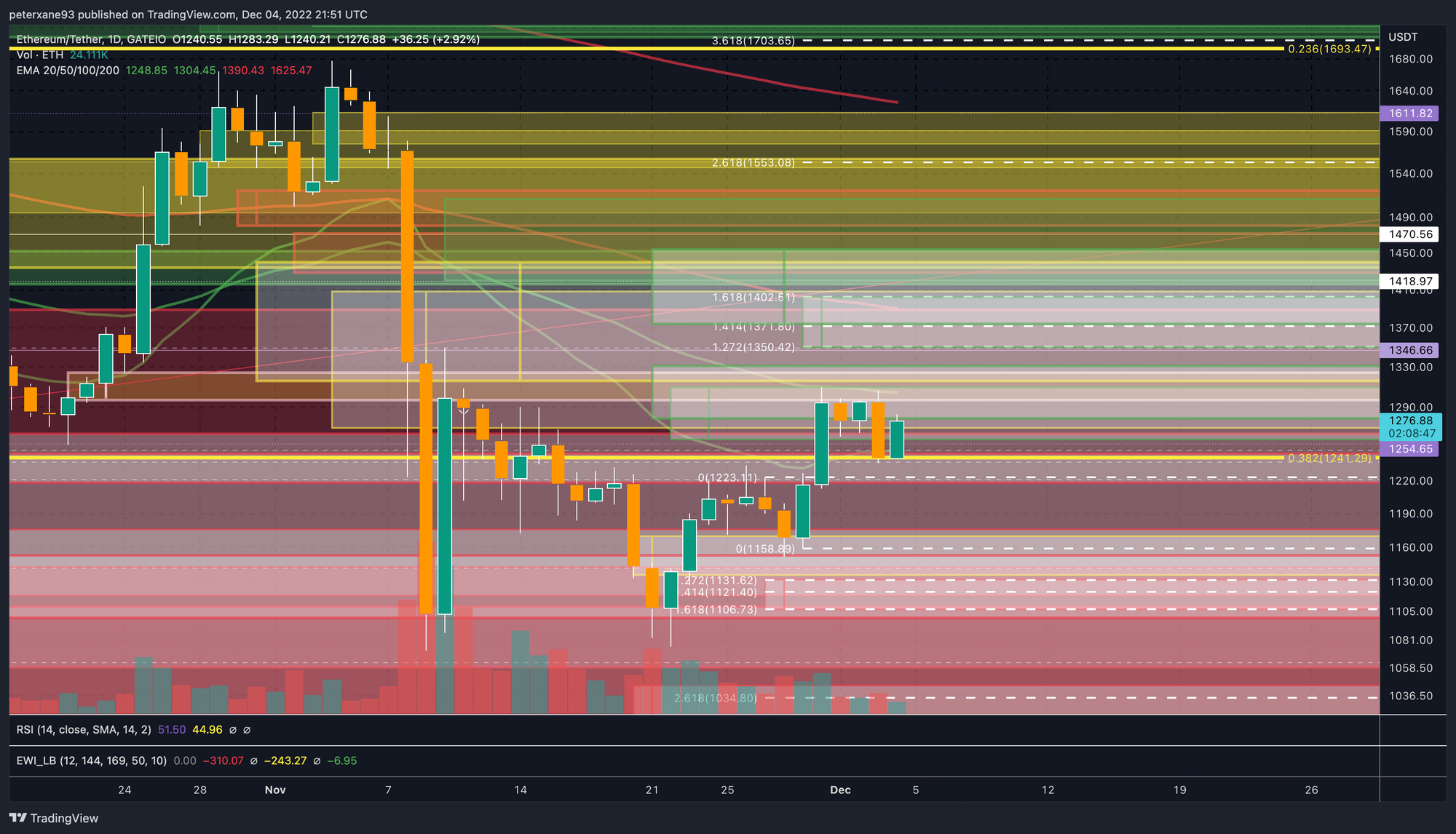 Note: Unlike BTC, Ether was slightly more volatile during the weekend, particularly on Saturday when it found support above the 38.2% ($1,240) monthly Fibonacci Retracement level (measured from Oct. 2020 - Apr. 2021) and rebounded immediately on Sunday.

However, the rebound was not nearly strong enough to catapult the price of ETH into the nearest weekly resistance zone (or above $1,280), implying this week can get a little choppy. But as long as the bulls are able to keep the price above the 38.2% monthly Fibonacci level ($1,240), it is likely we will see ETH push through certain higher resistance zones, though it is too early to say if we can stay there.


Hedge fund manager Michael Burry, famed for forecasting the 2008 financial crisis, believes there isn’t a strategy to pull us out of “this real recession.”

The founder of investment firm Scion Asset Management is best known for being the first investor to foresee and profit from the U.S. subprime mortgage crisis that occurred between 2007 and 2010. He is profiled in “The Big Short,” a book by Michael Lewis about the mortgage crisis, which was made into a movie starring Christian Bale.

The Big Short investor tweeted about a recession Tuesday,

“What strategy will pull us out of this real recession? What forces would pull us so? There are none. So we are really looking at an extended multi-year recession. Who is predicting this? There are none.”

Burry has warned about a recession several times in the past. In May, he cautioned about a looming consumer recession and more earnings trouble. In April, he said that the Federal Reserve “has no intention of fighting inflation,” adding that “The Fed’s all about reloading the monetary bazooka. So it can ride to the rescue & finance the fiscal put.”

“Some of us have been predicting a long and severe recession and made a detailed case for why we are headed towards a Great Stagflationary Debt Crisis. I have myself argued all year that the coming recession will not likely be ‘short and shallow.”

This week, Tesla CEO and Twitter chief Elon Musk also warned about a severe recession. He urged the Federal Reserve to cut interest rates “immediately,” emphasizing that the Fed is “massively amplifying the probability of a severe recession.”

🔹 SBF: “…once I have finished learning and reviewing what happened, I would feel like it was my duty to appear before the committee and explain. I'm not sure that will happen by the 13th. But when it does, I will testify (before congress).”

🔹 Some CEXes are cutting jobs as the bear market deepens. Sunday, Bybit CEO announced it will be reducing its workforce. Earlier last week, Kraken cut 1,100 staff or 30% of its workforce while Coinbase laid off more than 60 employees from its human resource department.

🔹 Genesis owes $900 million to another group of assorted creditors on top of the earlier reported $900 million to customers of Gemini, which tallies up to $1.8 billion. In addition, a third group has recently surfaced but the amount of loans this third group is owed is not yet known.

🔹 Web Browser Opera will roll out an NFT creation tool next January. The launchpad will give users an easy, no-code way to create NFTs and review the simplified properties of their smart contracts.

🔹 Infrastructure provider Ankr and stablecoin issuer Helio Protocol lost a total of $20 million in two attacks, according to on-chain analysis by security firm BlockSec. The first attack targeted a liquid staking token product run by Ankr, resulting in a loss of more than $5 million. In the second attack, someone acquired some 183,000 aBNBc tokens with 10 BNB ($2,900), which then were deposited into a BNB Chain-based stablecoin issuer Helio Protocol to drain funds. The attacker was able to borrow $16 million in the HAY stablecoin with a small amount of aBNBc collateral and subsequently swapped their HAY stablecoin for $15 million Binance USD (BUSD).