🔹 Prices of Bitcoin and Ether continue to falter as of early Tuesday trading, marking the third consecutive lower open since Saturday.

🔹 For global investors, this week’s FOMC minutes will be crucial as Fed Chair Powell’s speech may offer more signals to 2023’s global outlook. The implications will be where the havens are, and where money should be allocated to protect investors’ assets in light of a potential global downturn.

🔹 Bitcoin and Ether’s correlations with the Dollar are at 0.86 and 0.77, respectively, steadily rising from negative territories since Nov. 7. Despite the positive correlations and a rising dollar index, the cryptocurrency markets have suffered due to recent events and the moves are hardly parallel on the daily timeframe.

🔹 Meanwhile, the positive correlations with the volatility index have been rising in a steeper slope ahead of Wednesday’s FOMC statement; just two weeks ago, the relationships were inverse, much like the dollar index.

🔹 The topic of the Day: Will Grayscale be the next thunderstorm?

🔹 Happenings of the Week: The Bank of England stresses the need for a digital pound; Genesis says it may file for bankruptcy if it can't raise enough money; Ren 1.0 network to shut down in 30 days…

The Bleeding May Continue

The price of Bitcoin has dropped around 6% since a week ago. Ether, on the other hand, fell 11.5% during the same period and found support around the $1,100 level.

According to blockchain-data firm Kaiko, the FTX wipeout had reduced the overall liquidity available in the decentralized space. The decline has been dubbed the “Alameda Gap” which Kaiko noted in its newsletter, “Plunges in liquidity usually come during periods of volatility as trading shops pull bids and asks from their order books to better regulate risks.”

In a separate report by Coinbase Global, “The rapid fall of FTX will potentially extend the crypto bear market by several more months, or perhaps through the end of 2023.”

Meanwhile, there has been an increase in activity on major decentralized exchanges, with total volume surging by more than 45% in the past 30 days, according to data from DefiLlama.

On the macro front, investors are closely watching what Fed speakers say about the outlook for interest rates. While several central bank officials in recent days have restated their intention to remain relentless until inflation is under control, they differ on how far they’ll go.

On Monday, San Francisco Fed President Mary Daly said that officials will need to be mindful of the lags with which monetary policy is transmitted through the economy as they raise rates further. Her Cleveland counterpart Loretta Mester said she’s open to slowing the tempo of rate hikes.

As such, this week’s FOMC minutes will be crucial as Fed Chair Powell’s speech may offer more signals to 2023’s global outlook. The implications of this include where the perceived havens are, and where money should be allocated to protect investors’ assets amid growing concerns about an inevitable recession as inflationary pressures seep into the daily lives of ordinary working folks.

During its last meeting, the Federal Reserve raised the target range for the federal funds rate by 75bps to 3.75%-4%, which marked a sixth consecutive rate hike and the fourth straight three-quarter point increase, pushing borrowing costs to a new high.

The Fed aims to attain a stance of monetary policy that is sufficiently restrictive to return inflation to 2%, which remains elevated around 40-year highs.

Policymakers also said that ongoing increases in the target range will be appropriate and that they will take into account the cumulative tightening of monetary policy, the lags with which monetary policy affects economic activity and inflation, and economic and financial developments when deciding on the size of further increases.

The message could signal a smaller rate hike in December but during the last press conference Chair Powell also noted the ultimate level of interest rates will be higher than previously expected.

Last Friday, UK’s October retail sales, though beating the consensus, were still in the negative growth zone. This means Canada’s figures will aid investors in evaluating global growth and where to potentially allocate their money to mitigate risk.

In traders’ anticipation of the data release, the Dollar Index was down slightly while the Canadian Dollar was up during the early Asian trading session.

The Offshore Yuan fell against the dollar at the time of the data release, which boosted the dollar index but failed to catalyze cryptocurrencies after a build-up of bearish sentiment from last weekend’s plunge. 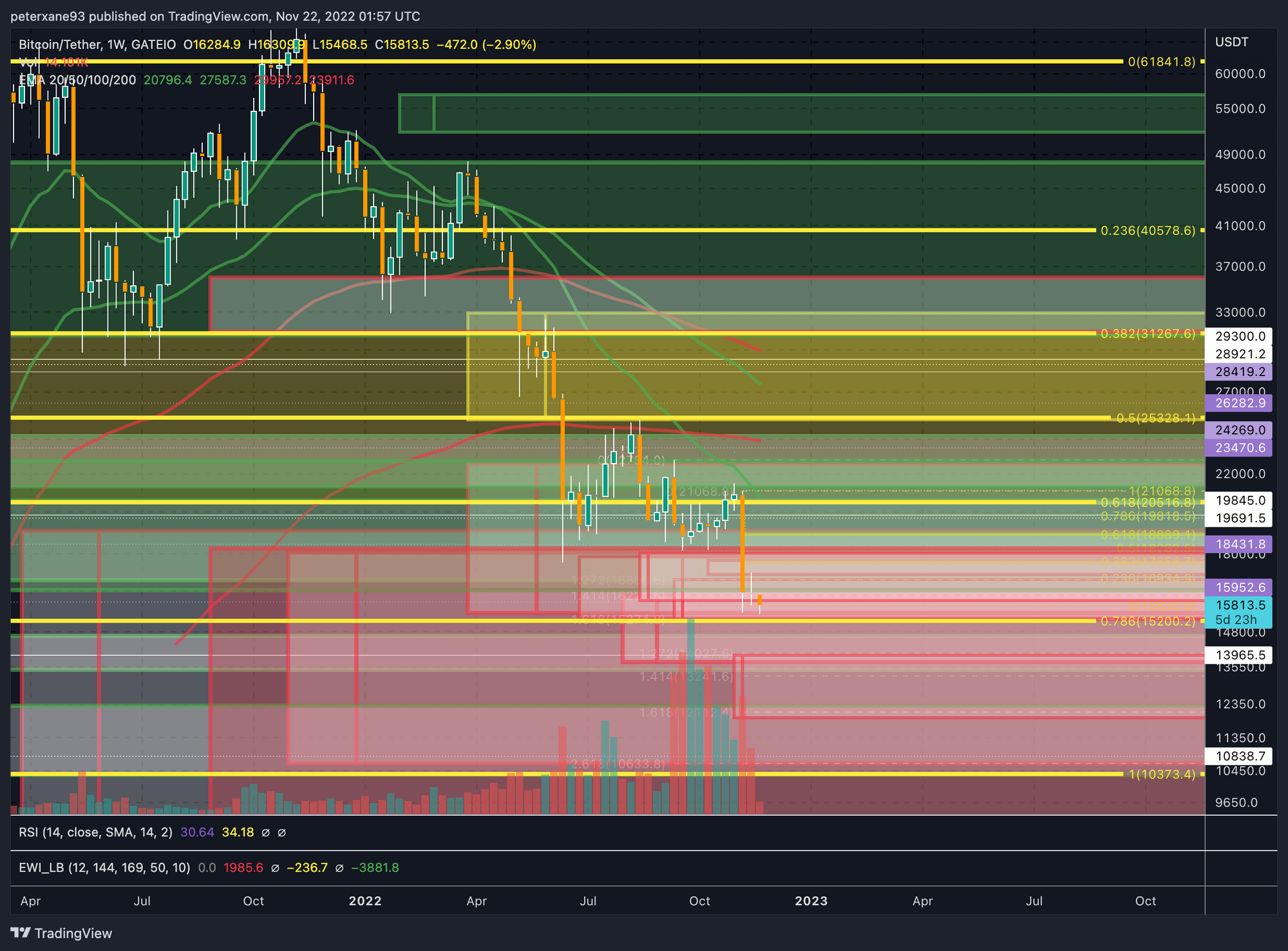 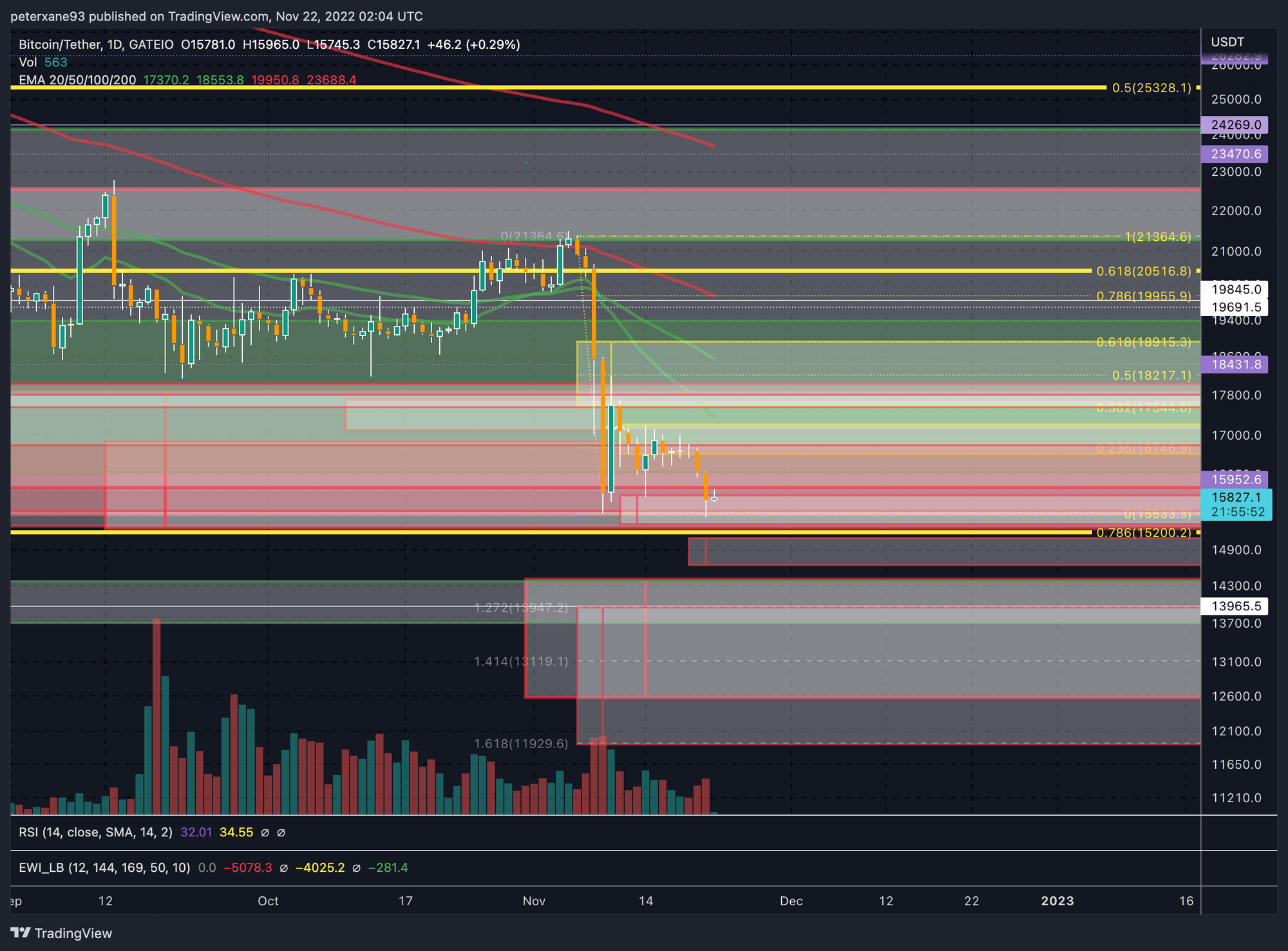 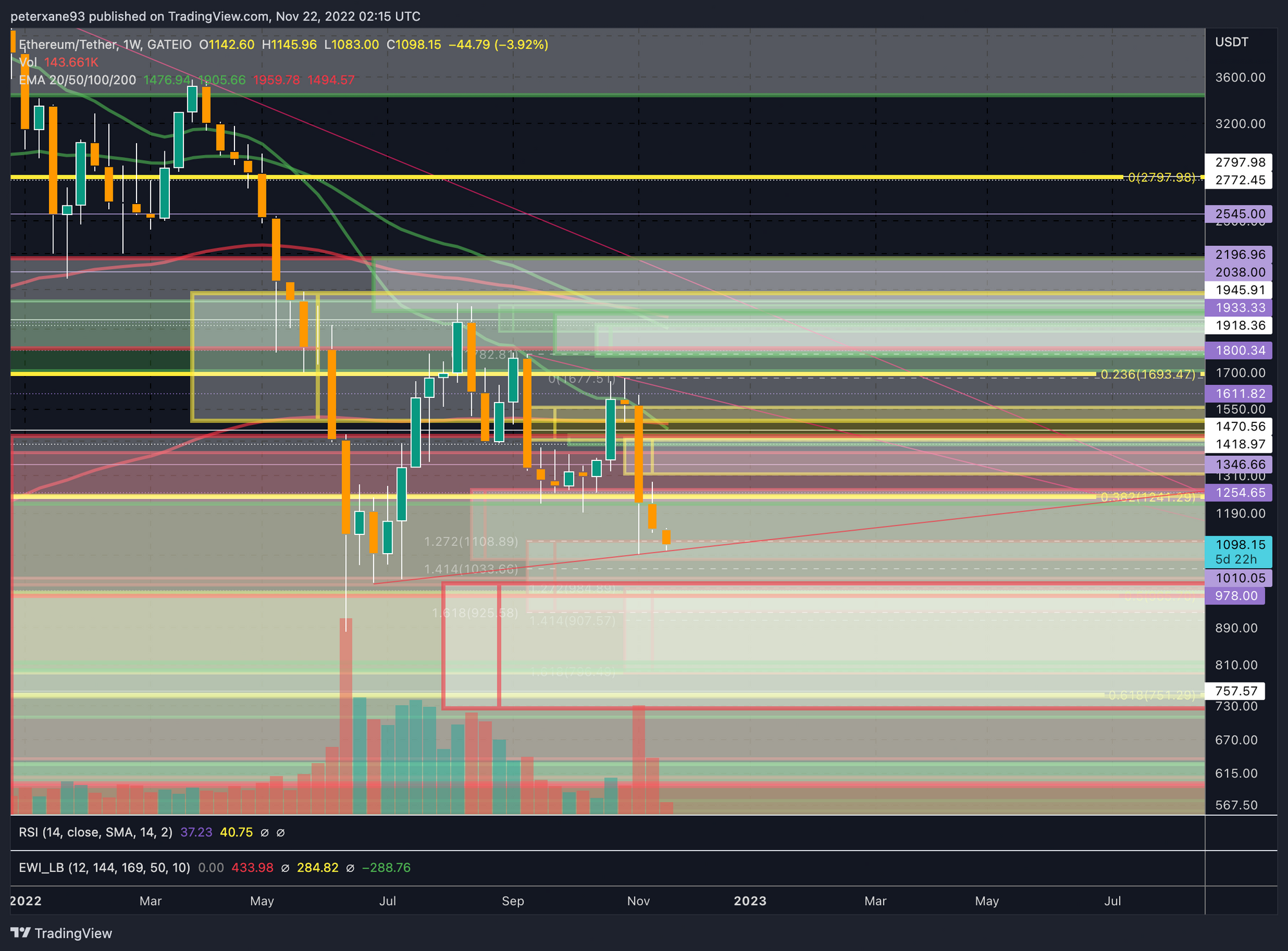 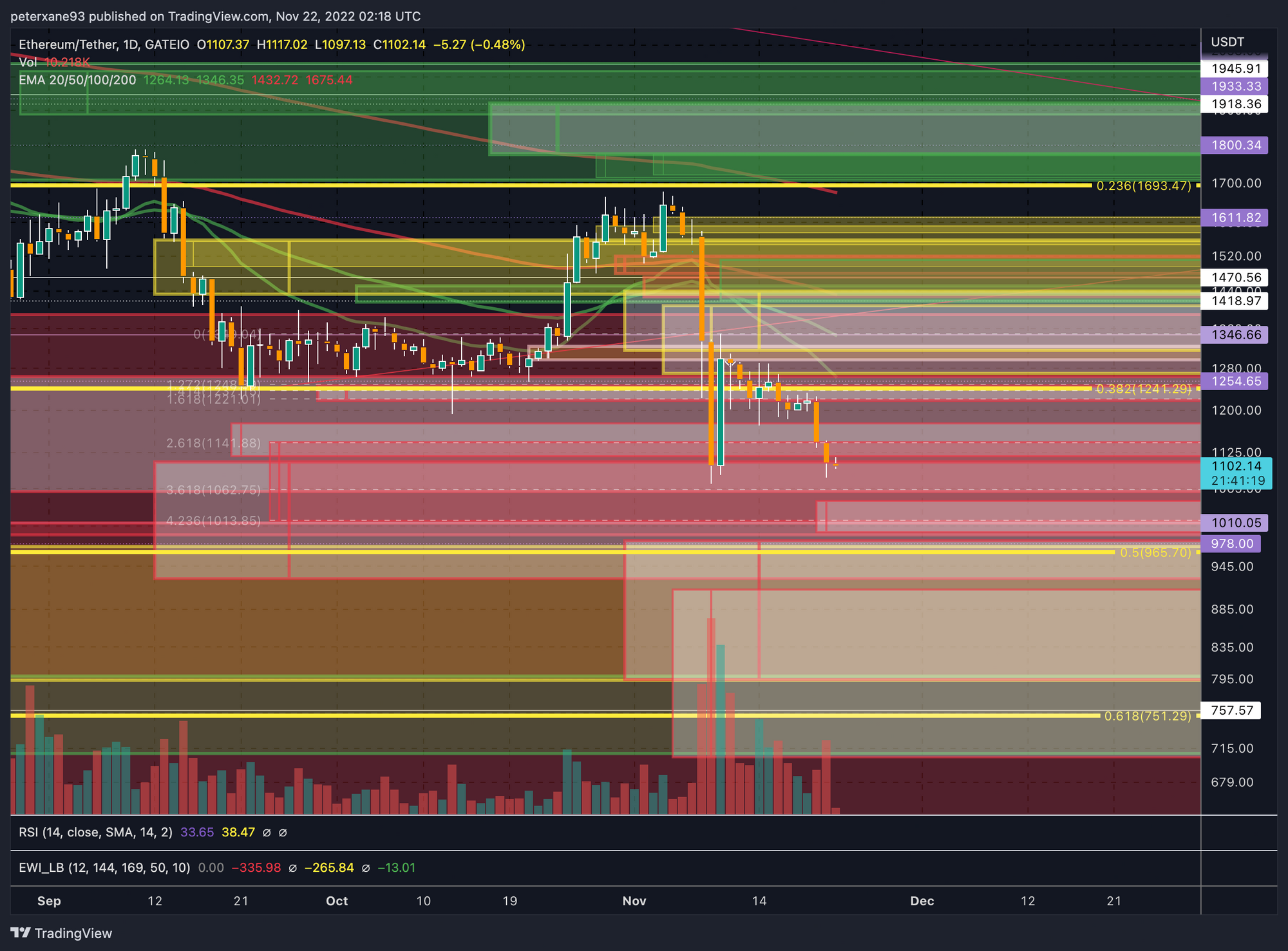 📌 Today's topic: Will Grayscale be the next thunderstorm?

Two days ago, on November 19, Grayscale issued an official announcement reaffirming the safety of its assets. The announcement revealed that the position balances of Grayscale's digital asset products are available in historical public documents evaluated by third-party auditors; and that each of its digital asset products has a separate trust entity, with all digital assets held by Coinbase Custody as custodian, and that neither Grayscale nor Coinbase Custody has the right to borrow, lend, re-pledge or otherwise pledge the underlying assets of the product.

However, Grayscale has officially stated that it will not release proof of reserves to disclose information about its custodian's on-chain wallet for security reasons, causing the market to question Grayscale's risk control capabilities.

In response, President of The ETF Store Nate Geraci said, "The structure of GBTC is clearly not optimal, as the shares are not redeemable. It is very disappointing that the SEC continues to allow any retail investor to use the fund, but they will not approve a spot Bitcoin ETF that would address the discount issue. This is yet another example of the ridiculous regulatory dysfunction that currently exists across the crypto ecosystem."

With the FTX shockwaves spreading throughout the decentralized world and the possibility of further negative GBTC premiums, do you think Grayscale is still safe, or will it be the next giant to fall?

🔹 In their declaration, G20 leaders, including President Joe Biden, called for a global regulatory framework for crypto.

🔹 China's central bank and eight other departments are actively exploring the safe application of blockchain technology in financial scenarios such as transaction clearing.

🔹 Bank of England: the UK needs digital pounds and should include cryptocurrencies in the scope of regulation.

🔹 Genesis says it may file for bankruptcy if it can't raise enough money.

🔹 Playboy's application to register NFT-related trademarks had been approved.

🔹 NEAR Protocol releases Staking Transparency Report which reported 469 Million NEARs were pledged or about 42% of the Total Supply.

🔹 Ren 1.0 network to shut down in 30 days, officials suggest bridging Ren assets back to the native chain as soon as possible.

🔹 The countries with the largest share of users before the FTX crash were South Korea, Singapore and Japan.

🔹 Sony filed a patent application for its technology described as "using tokens on a distributed ledger to track in-game unique digital assets.”

🔹 Vitalik Buterin: FTX incident is a "huge tragedy" and says cryptocurrencies have a long way to go to reach their full potential.

🔹 Trump reiterated that he has no intention of returning to Twitter.

🔹 The Caribbean island nation of St. Nick is set to make BCH legal tender by 2023.

🔹 FTX announces the launch of a strategic review of its global assets and intends to sell or restructure certain businesses.

🔹 Grayscale: For security reasons, no on-chain wallet information will be disclosed via proof of reserve.

🔹 X2Y2 removed "custom royalty" and will enforce royalties on all NFTs.

🔹 The Ensign Group plans to launch a cryptocurrency hedge fund.

🔹 Tuvalu will be the first country to move into the metaverse as rising sea levels threaten survival.

🔹 New FTX CEO: Alameda had a "secret waiver" in the FTX auto-liquidation agreement.

🔹Asset management and technology platform Fasanara Capital receives a $200 million mandate from the Canadian Pension Fund. Founded in 2011, Fasanara Capital, which describes itself as "a significant provider of liquidity to the crypto market," is understood to have just recently launched a $350 million fintech and crypto venture capital fund. Fasanara Capital CEO Francesco Filia said the latest $200 million in funding will help strengthen its portfolio companies, ensuring they have access to a range of financial products when they need them.

🔹 Decentralized financial marketplace infrastructure startup Revv announced that it has closed a $5.5 million round of funding in Q2 led by Libertus Capital. Revv founder Adi Dommaraju said he hopes to build the new DeFi product by combining TradFi and Web2 practices with a crypto-native experience.

🔹 NFT platform Hyakkit closed a $2 million seed round led by Step VC and others. Hyakki is dedicated to building marketing and utility infrastructure for Web3 and NFT, using AR and AI to provide marketing services and application scenarios for Web2 and Web3 brands so that NFT is not limited to JPEG images but can give brands more.

🔹 Blockchain digital securities platform DEFYCA closes a $1.3 million seed round led by QBN Capital and Blizzard Fund. DEFYCA developed the blockchain protocol DEFYCA Protocol to help cryptocurrency investors invest in traditional debt securities through Tokenized assets. These Tokenized assets will be incorporated into a liquidity pool, and processes including price discovery, settlement, and payment will be executed through smart contracts, subsequently creating a link between DeFi and TradFi (traditional finance).

🔹 Web3 data solution Vezgo closes a $750,000 funding round with participation from Bitnomic Capital and others. Reportedly spun off from investment aggregation platform Wealthica and operating independently, Vezgo aims to provide Web2 finance and fintech companies with access to data including centralized trading platforms, wallets, NFTs, and other on-chain data via APIs.

🔹 FTX hack update: According to Etherscan on-chain data, the address marked as "FTX Accounts Drainer" starting with 0x59a has transferred approximately $200 million worth of ETH to 12 different crypto wallets, which started around 00:00 on November 22 (UTC+8 ). Within six minutes, the wallets made 12 transactions, each sending 15,000 ETH to a different crypto wallet address, and the 12 new wallet addresses have yet to do anything with the funds. Larry Cermak, vice president of research at The Block, said the entity has not yet started selling off the Ether that has been transferred to the 12 wallets because there is little remaining liquidity to convert Ether for renBTC.

🔹 VenomSoftX, a malicious extension for stealing cryptocurrency, was discovered in Google Chrome and can be used to steal users' cryptocurrency and sensitive data. The extension is installed via the Windows version of the ViperSoftX malware and is a Java_script_-based RAT (Remote Access Trojan) and cryptocurrency hijacker. By analyzing the hard-coded wallet addresses in the ViperSoftX and VenomSoftX samples, Avast found that by November 8, 2022, both had earned its hackers a total of approximately $130,000. This stolen cryptocurrency was obtained by transferring attempted cryptocurrency transactions on the attacked devices, excluding profits from parallel activities.


Author: Gate.io Researcher Peter L. & Byron B.
This article represents only the researcher's views and does not constitute any investment advice.
Gate.io reserves all rights to this article. Reposting the article will be permitted provided Gate.io is referenced.
In all other cases, legal action will be taken due to copyright infringement.

BTC -2.04%
ETH -1.64%
GT -4.64%
As anticipated, the volatility index and its relationships with cryptocurrencies rise in a steeper slope ahead of FOMC on Wednesday, implying traders are setting up their bets. Meanwhile, investors will look to the same data to gauge a 2023 global outlook.
Register & Get$5600 Giveaways
Register Now
Related Articles