Alphabet and Microsoft dented the recent rally on Wall Street. Shares of Meta tumbled more than 12% in extended trading and are down more than 55% this year through Wednesday’s close.

The dollar traded flat after falling on Wednesday. The inverse correlation with Bitcoin and Ether stands at -0.51 and -0.48, respectively.

🔹 Bank of Canada Interest Rate Decision
On Wednesday, The Bank of Canada unexpectedly slowed its pace of interest-rate hikes as the nation’s economy flirts with recession, although sustained inflation meant it still expects to raise borrowing costs again. 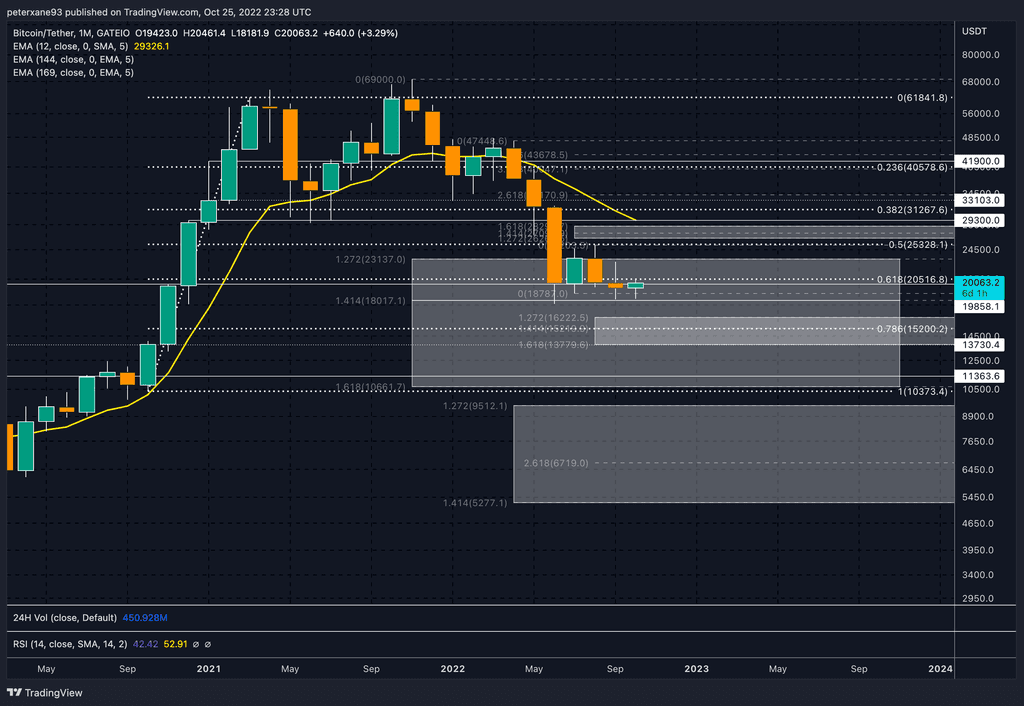 Before we get into the usual analytical pattern that starts with the weekly timeframe, it’s best to take a step back to look at the bigger picture.

As October is coming to an end, BTC bulls will need to close the monthly candle above the resistance zone formed between the monthly resistance level of 19,858 and the 61.8% (20,516) Fibonacci level, in order to make a “higher-high” price action formation in relative to the last monthly candle which opened at 20,052.

If the bulls succeed in pushing the price of BTC above said resistance zone (19,858 - 20,516), which will then become a support zone, then the next resistance zone will be 23,137 - 25,328.
On the other hand, if they fail, there are two scenarios that might occur in the month of November - December: 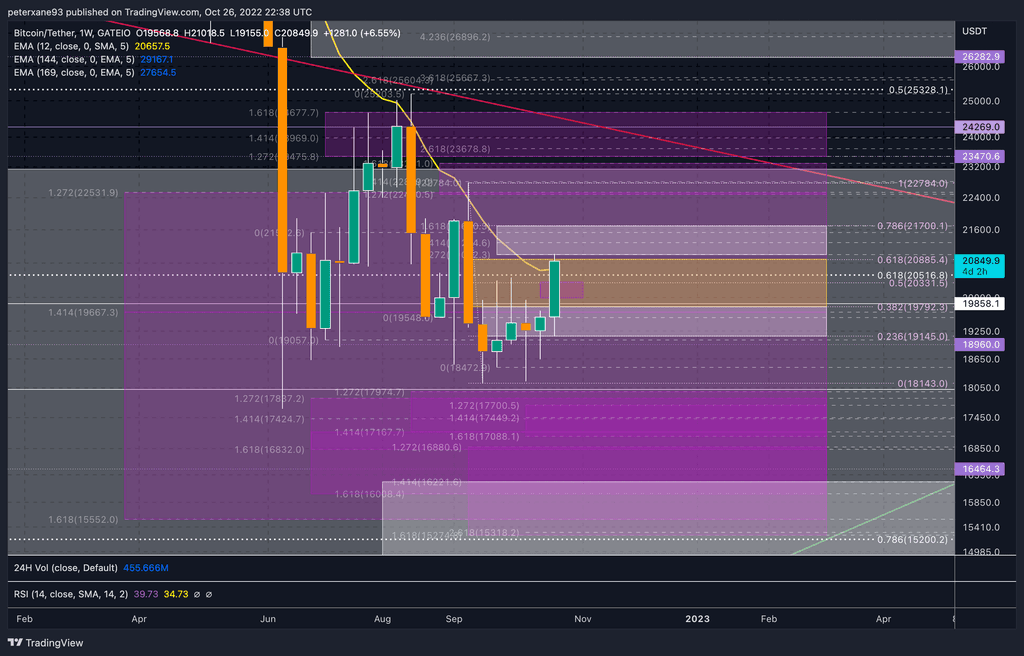 As it stands, the correlation between BTC and Nasdaq composite index is at 0.58, up from 0.41 Wednesday, implying traders should look closely at everything that’s happening in the US.

This week, in particular, traders should pay attention to big tech’s profit report, as yesterday’s uptrend was heavily influenced by Google and Microsoft.

Because of the jump yesterday, the price of BTC has made a “higher-high” price action formation relative to the last weekly candle and is currently trading within the resistance zone (19,991 - 20,356) derived from the last candle with the help of the Fibonacci Extension tool.

Before the end of the week, BTC bulls will need to maintain the price above the monthly resistance level of 19,858 to sustain a bullish outlook going into next week. 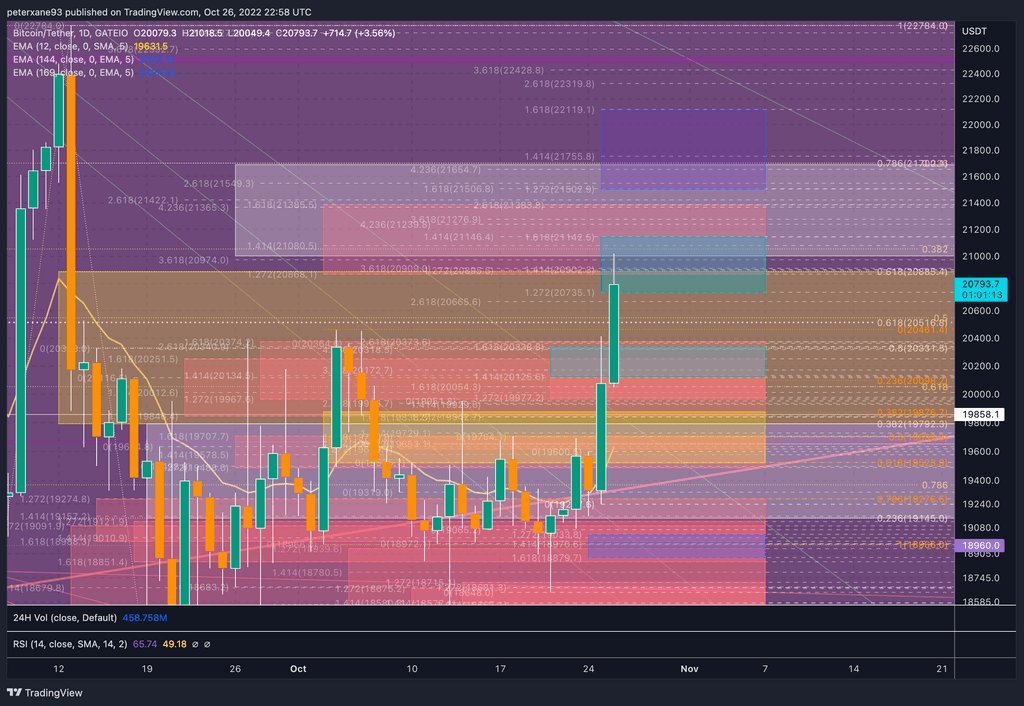 BTC’s 3-day ascent has broken the opening price of the previous bearish rally from Oct. 18 - 20, which implies this week's outlook has turned to the upside.

But before the bulls should have any hopes of seeing BTC trend higher, first BTC will have to find more solid support between the 23.6% (19,441) and 38.2% (19,287) Fibonacci Retracement levels measured from the bullish rally.

Notably, the 78.6% (19,369) Fibonacci level derived from the bullish rally between Sep. 7 - 12 is sandwiched between the aforementioned levels and serves as an anchor point to break away from the low volatility accumulation period seen between September and October.

On Tuesday, BTC has failed to close above the 23.6% (20,098) Fibonacci Retracement level derived from the two-day ascent between Oct. 3 - 4 but remains above the 38.2% (19,876) level. Ideally, the price of BTC should pull back towards 19,977 before making another effort to push beyond the next resistance zone (20,125 - 20,338) to establish a sustainable bullish outlook. By closing a daily candle above the resistance zone, a “higher-high” price action formation can be established as it would invalidate a range set between Oct. 3 - 4, which in turn would imply BTC has moved beyond the accumulation phase from the last two months. 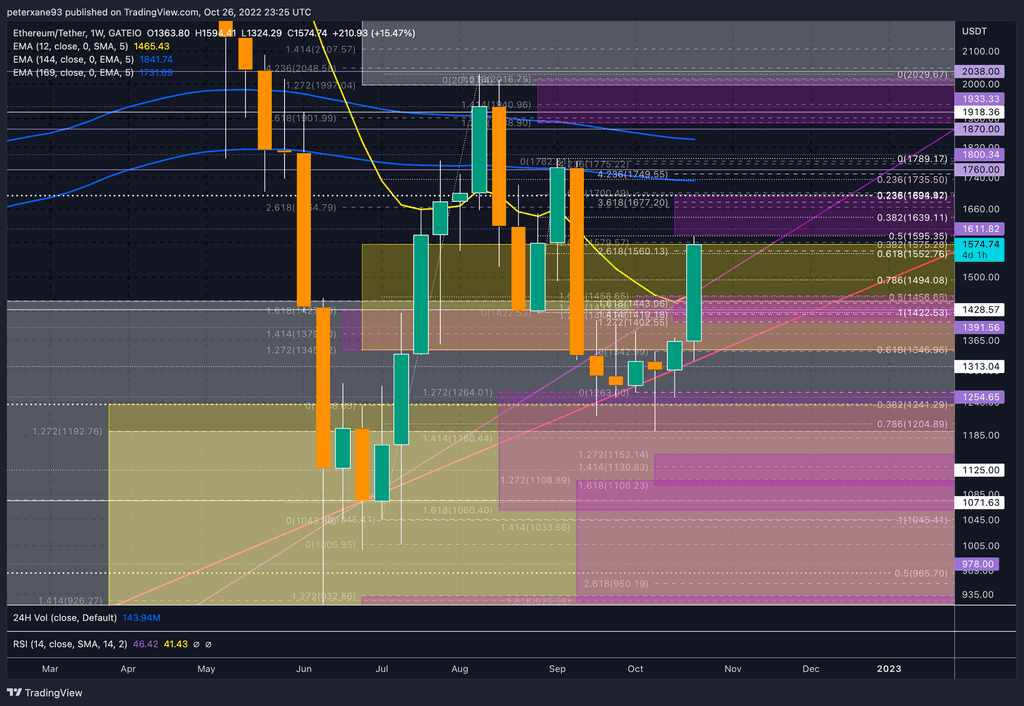 Likewise to BTC, the engulfing candle of last week indicates there is a higher probability of a retest of previous resistance levels. In the case of Ether, an important level to pay attention to is 1,428 (Monthly High of Jan. 2018). Notably, the monthly resistance level is sandwiched between the Fibonacci Extension levels (1,402 - 1,443) measured from last week.

Oct. 25’s ascension is closely related to Wall Street’s optimism for big tech earnings reports. For Ether, the sudden rise in buying volume has helped push the price above a resistance zone (1,458 - 1,428) which has now become the closest support zone.

Before the end of the week, ETH bulls will need to maintain the price above the monthly resistance level of 1,428 to sustain a bullish outlook going into next week.

Likewise to BTC, ETH bulls should be wary of a short-term decline to within the 23.6% (1,342) and 38.2% (1,324) Fibonacci Retracement levels measured from the 3-day ascent, in order to find support before a continuation to the upside.

A key resistance level to watch out for is 1,375 which was also the closing price of the Sep. 19 daily candle.

On Monday, Likewise to BTC, Ether rebounded from the 38.2% (1,324) Fibonacci Retracement level before settling above the 23.6% (1,342) level on Monday, implying an anchor point for an uptrend continuation has been set. ETH bulls will now have to make a “higher-high” price action formation by closing a daily candle above Sunday’s close of 1,363, or within the resistance zone (1,367 - 1,379) to draw in more buying interest.

On Tuesday, fueled by optimism from Wall Street over Q3’s big tech profits, Ether saw a rally akin to Aug. 29 which helped boosted its price above a resistance zone (1,404 - 1,449) which has now become its closest support zone. ETH bulls will now attempt to push past the next resistance zone (1,494 - 1,517), at the minimum, ETH bulls must close a daily candle above the weekly trendline to establish another anchor point.

📌 The topic of the day: Crypto Council for Innovation poll sees crypto voters as a force to be reckoned with

A survey by Crypto Council for Innovation (CCI) conducted shows that a candidate in the United States midterm elections who has a positive attitude towards cryptocurrency stands a higher chance of winning than someone who is against blockchain technology.

The research indicates that a significant fraction of voters have an interest in cryptocurrencies. They want the legislators to take initiatives that advance the adoption of blockchain technology in the country. Specifically, they want cryptocurrency to become part of the broader UK economy.

A total of 1, 208 people participated in the survey, carried out on 8 – 10 October 2022. Out of these, 13% own cryptocurrencies, 16% own stocks, 12% invest in mutual funds, and 5% are bondholders. Overall, 52% of the respondents indicated that their leaders should put more attention to cryptocurrencies. 45% want legislators to view and treat cryptocurrency as an essential component of the economy. However, 36% believe that cryptocurrencies are a mechanism for “fraud and abuse.”

🔹 The European Commission has released multiple reports investigating ways to supervise DeFi this month. This is a supplementary finding to the EU’s comprehensive Markets in Crypto-Assets regulation (MiCA) which focuses on centralized entities, namely service providers and stablecoin issuers. On Tuesday, European Commissioner Peter Kerstens called on the crypto industry to help come up with better solutions to regulate DeFi.

🔹 New amendments have been added to the UK’s Financial Services and Markets bill that raises the bar for the nation’s crypto regulatory framework which gives the authority to government agencies to ban unauthorized service providers on top of stablecoin regulation provisions.

🔹 According to the lawmakers, over 200 US government officials have left to join the digital asset sector. On Oct. 24, several progressive lawmakers including Senator Elizabeth Warren submitted an inquiry to various financial agencies requesting to know how they will cut down on their staff leaving to join crypto industry firms.

🔹 Bitcoin liquidates over $1 billion as its price rises.$704 million in cross-crypto shorts were liquidated on Oct. 25, with Oct. 26 tally so far standing at $275 million. Including long positions, the total was over $1 billion.

🔹 The next Bitcoin rally will be in Q2, 2023. The anticipation of the next Bitcoin (BTC) halving will be the main catalyst that sparks a new crypto rally as soon as the second quarter of 2023, according to hedge fund manager Mark Yusko.

🔹 50% of Gen Z and Millennials in the U.S want crypto in retirement funds. It shouldn’t come as a surprise, as the survey also found that 43% of Gen Z and 47% of Millennials are investing in cryptocurrencies outside their 401(k) already, which could suggest the group’s affinity for the asset class.

🔹 Decentralized exchange Pancakeswap passed a governance proposal to deploy on the newly launched blockchain, Aptos. Pancakeswap’s token CAKE will be natively integrated into Aptos, along with four of its DEX primary features.

🔹 Near Foundation announced a fund to replenish a $40 million collateral deficit found in USN stablecoin. The foundation also recommended that the issuer Decentral Bank should retire the stablecoin.

🔹 Two Chinese intelligence officers were charged with bribing an undercover FBI agent with $61K in Bitcoin in an attempt to disrupt the prosecution of a Chinese telecommunications firm. The Associated Press reports it is likely Huawei, though US attorney general Merrick Garland did not name the company during the announcement.

🔹 Apple updated its App Store policy to restrict apps from using NFTs. Recently, the tech giant has been criticized for charging 30% by NFT startups when the general commission was 3%.

🔹 NFT project Azuki auctioned eight Golden Skateboard NFTs which will be redeemable for physical skateboards ranging between bids of 200 ETH ($271K) to 309 ETH ($420K). The floor price for Azuki’s anime-inspired NFT avatars was 11.5 ETH ($15.6K) as of Sunday.

🔹 Brokerage app Robinhood is looking to expand its compliance team ahead of its release of a self-custody wallet. The platform was fined $30 million in August for failing to comply with anti-money laundering (AML) and cybersecurity regulations.

🔹 MakerDAO is set to move forward to transfer 1.1 billion (33%) USDC into Coinbase Custody to earn 15 million USDC in annual institutional rewards. Recently MakerDAO partnered with Monetalis to allocate $500 million of its stablecoin reserves into short-term US treasury and investment-grade corporate bonds.

🔹 Argentina's national tax authority (AFIP) crackdown on an underground crypto mining farm led to 40 arrests. ONG Bitcoin Argentina, a non-profit organization that works closely with the agency, issued a statement declaring that “crypto mining in itself is not a crime when it adheres to local laws.”

🔹 Interpol announced it will offer online police training in its own metaverse bureau. The initiative may be linked to technology research firm Gartner, which estimated that one in every four people will spend at least an hour a day in the metaverse to work, study, shop, and socialize by 2026.

🔹 Messaging app Telegram is soon to launch a username marketplace on The Open Network (TON) blockchain. The username auction platform will be akin to Ethereum Name Service. TON is developed by open-source developers and is a continuation of the abandoned Telegram Open Network due to pressures from the SEC.

🔹 Web3 publishing platform Paragraph raised $1.7 million in a pre-seed funding round led by Lemniscap. The platform aims to help web3 writers, DAOs and NFT communities monetize their content through an all-in-one newsletter service.

🔹 Decentralized exchange QuickSwap was exploited for $200K through the use of flash loans on the XYZ lending market. The exploiter has since bridged the funds back to Ethereum, before depositing them in Tornado Cash.


Author: Gate.io Researcher Peter L.&Mashell C.
This article represents only the researcher's views and does not constitute any investment advice.
Gate.io reserves all rights to this article. Reposting the article will be permitted provided Gate.io is referenced.
In all other cases, legal action will be taken due to copyright infringement.
ETH + 1.60%
BTC -0.07%
GT + 2.19%
Register & Get$5600 Giveaways
Register Now
Related Articles