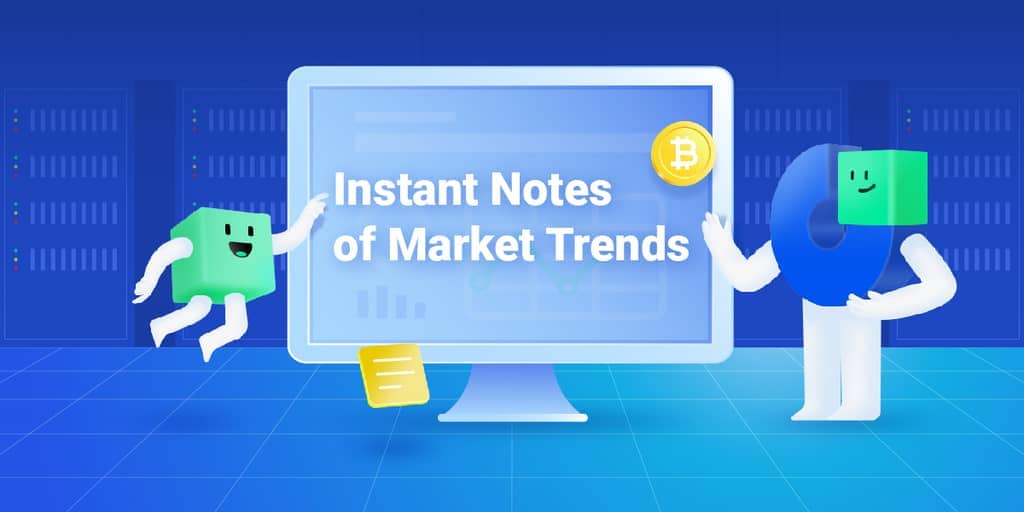 After what appeared to be the cryptocurrency market’s re-entry into the decimating bear market, that is plaguing the international economic stage, last week, the market appears to have rebounded amidst growing bullish sentiments. With the likes of Polygon seeing a 13.41% rebound and Ethereum climbing by 6.77%, the top 50 assets, for the most part, have been privy to green candlesticks and growing momentum. However, this bullish sentiment may begin to slow for the likes of stablecoins, as the FDIC has called for stablecoins to be limited to a select number of permissioned blockchains, potentially slowing the development of DeFi stablecoins across multiple emerging blockchains.

However, Algorand has been privy to the aforementioned bullish momentum, seeing a 60% uptick in on-chain activity across the past week as active addresses soar, paralleled only by Litecoin which witnessed a 75% uptick across the past week also. On a more general note, a recent study conducted by the Bank of America has revealed that young investors are 7.5 times more likely to hold cryptocurrencies in their investment portfolios in comparison to their middle-aged and elderly peers, thus signalling that the newer generations may hold the key to mass cryptocurrency adoption.

Across the coming week, it can be ascertained that this bullish momentum may ensue, providing some leverage to the cryptocurrency market whilst other markets continue to plunge in light of global macroeconomic factors. It is also likely that the FDIC knuckling down on stablecoins and proposing potential means of limiting their use may spark further regulatory discussion regarding the viability of mass stablecoin adoption. Additionally, it is likely that the likes of Algorand and Litecoin may continue to witness growing adoption and use throughout the coming weeks, with this momentum potentially extending to other famous DeFi tokens.

Following the plethora of stablecoin scandals that have plagued the cryptocurrency space over the past few years (think Tether, Terra, etc.), stablecoins have become increasingly more speculative as an investment and a viable means of international digital fund transfer. This has been officially recognised by the Federal Deposit Insurance Corporation (FDIC) which has cautioned that ‘innovation for innovation's sake’ can be a ‘double-edged sword’, particularly in the case of stablecoins.

As a means of trying to limit the issuance of stablecoins, the FDIC has called for stablecoins to be limited to permissioned blockchains solely. Specific blockchains are yet to be named, however, the FDIC has suggested that permissioned blockchains will feature robust governance and compliance mechanisms and that it is essential that all validators and nodes are known by those involved with transacting upon the networks. The FDIC has suggested that this would support initiatives to slow cryptocurrency-based money laundering and illicit financial aciovtiies occurring on blockchains courtesy of malicious actors.

However, due to the anonymous, yet unfalteringly transparent, nature of blockchain itself, this move could be argued to be a means of centralising blockchain activity. Removing the anonymity and inherently ‘trustless’ nature of decentralised finance could further centralise mainstream cryptocurrency adoption and potentially hinder decentralised finance development. However, with the FDIC simply stating this, there is yet to be any confirmation regarding the implementation of stronger regulations and restrictions on the stablecoin space.

With the bear market having deterred many investors from ‘hodling’ their bags or from investing in new assets entirely, Algorand has broken the hegemony, after witnessing a 60% growth in on-chain activity across the past week. This growth has paved the way for the number of active addresses to soar to 104,000 and for the number of owners to increase by 0.8% to 1.1 million. The only growth comparable this week is that of Litecoin, which saw an exponential 75% uptick in on-chain activity, boosting the number of owners by 0.9% to 3 million and increasing the number of active addresses to 378,000.

However, despite this seemingly bullish momentum for Algorand, the short-term technical data appears to be relatively sloppy. Having only moved upwards by 1.29% this week, teetering at $0.3126, the one-day technical data suggests that there is a strong sell sentiment at 17, while 9 demonstrate neutrality. Regarding moving averages, ALGO is trading below both its 100 and 200-day MAs, and the technical data is pointing towards a strong sell at 14.

This may mean that the future of ALGO could be dominated by a strong sell-off, providing that the bullish sentiment from the community fails to tide the asset over into a more neutral technical landscape. 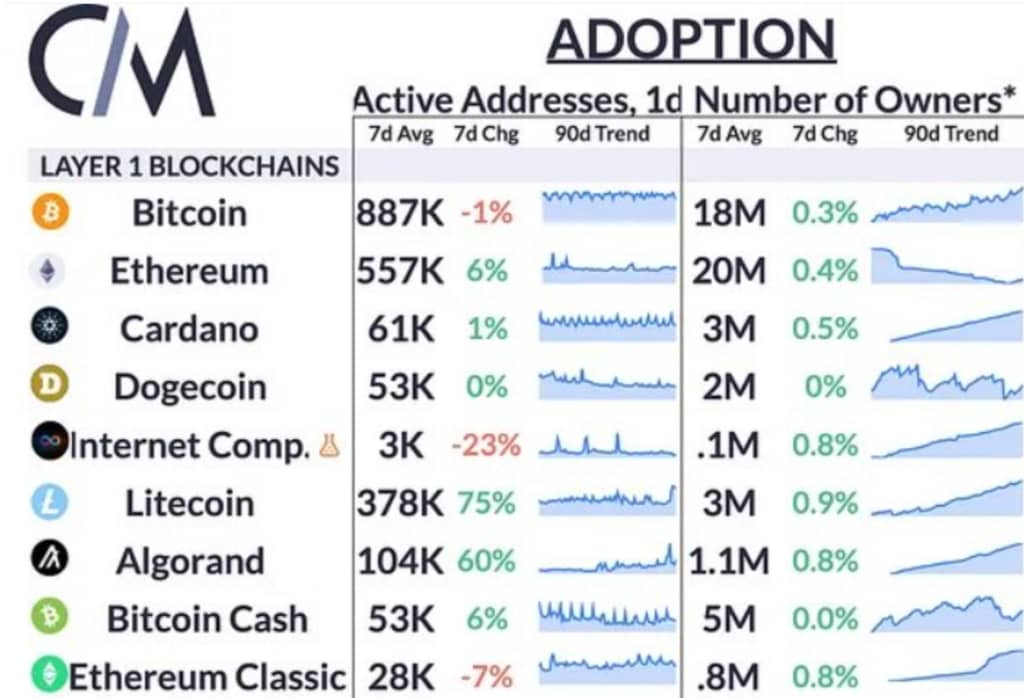 Undeniably, cryptocurrencies have primarily received a warmer reception from younger generations since their emergence into mainstream consciousness. However, a study conducted by The Bank of America has consolidated this, providing concrete evidence that younger Americans aged between 21-42 are 7.5 times more likely to hold cryptocurrencies in their investment portfolios compared to the 43 years old and above group.

Many within this younger cohort appeared less interested in investing in stocks and instead viewed cryptocurrency as their ‘No.1 choice’. With a staggering 25% delegation to stocks and 16% to alternative funds ratio, the younger cohort has demonstrated that they view cryptocurrencies as a more viable and profitable option as opposed to the former, despite the volatility inherent to the market.

Despite the overall adoption of cryptocurrency being relatively low in both groups, 75% of the younger cohort claimed that they believe it to be impossible to achieve above-average returns on a traditionally constructed portfolio consisting of stocks and bonds. Instead, this group have turned towards alternative investment routes, such as real estate, private equity, commodities, and of course, cryptocurrencies.

This growing warmth towards cryptocurrencies demonstrates the beginning of a cultural shift whereby traditional finance is no longer regarded as the only viable option for investors. This change could continue to develop in the coming years. 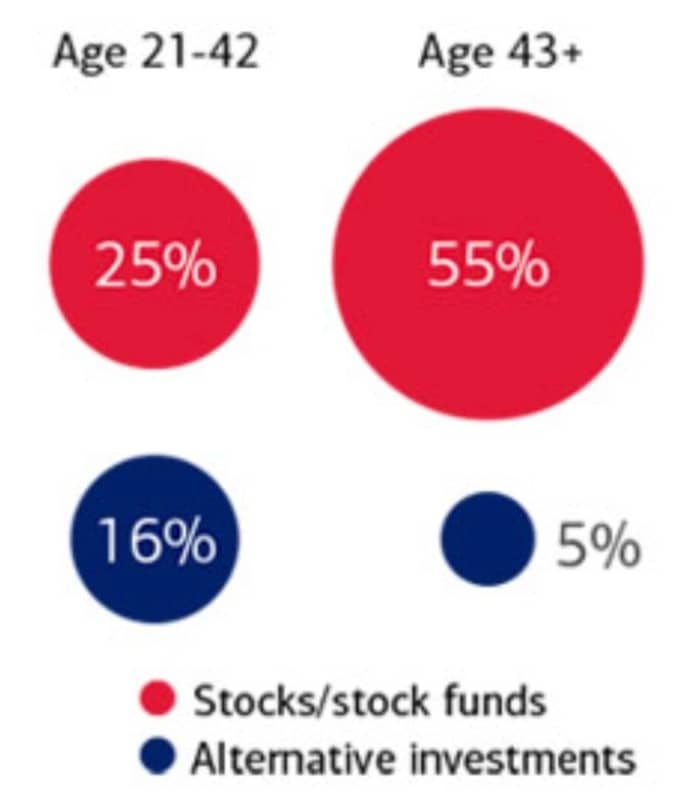 Author: Gate.io Researcher: Matthew Webster-Dowsing
* This article represents only the views of the researcher and does not constitute any investment suggestions.
*Gate.io reserves all rights to this article. Reposting of the article will be permitted provided Gate.io is referenced. In all other cases, legal action will be taken due to copyright infringement.
BTC -1.62%
ETH -2.08%
LTC -2.41%
ALGO -0.47%
Register & Get$5600 Giveaways
Register Now
Related Articles