Tether(USDT), the largest stablecoin by market capitalization, recently launched on Near protocol Network and has also gone live on Polkadot Network. Polkadot, an interoperability blockchain solution that enables cross-blockchain interaction, now joins the host of variations of Tether’s USDT stablecoin. According to details from the official release, this development will positively impact market volatility and allow devs to integrate the asset in DeFi applications across parachains. 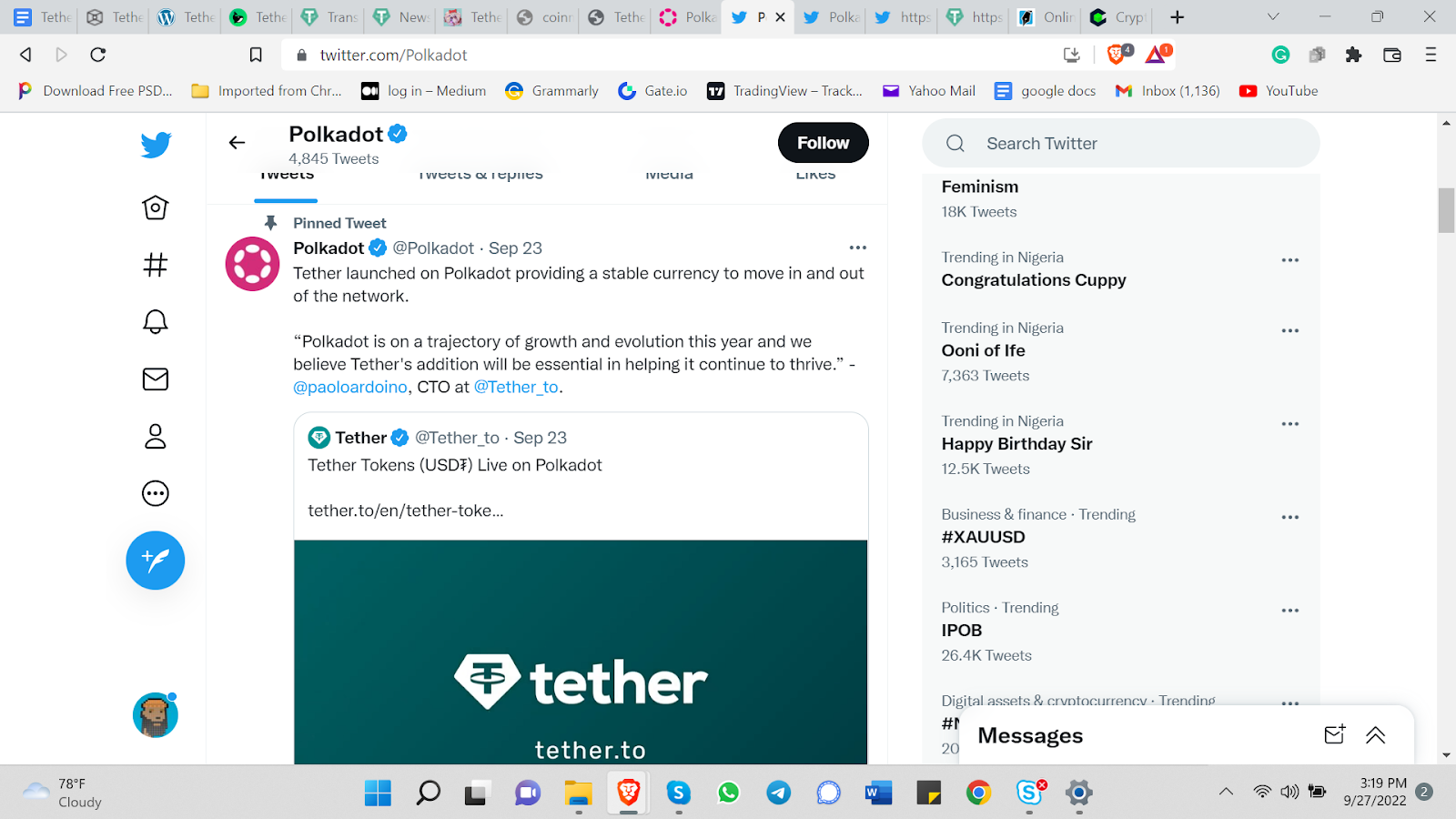 Tether is known to be the first stablecoin in the crypto space and the largest cryptocurrency, with over $67.9 Billion in market capitalization. It has not ceased to expand its USDT stablecoin across different blockchains. With the recent news, Polkadot will join the host of Tether-supported networks; Ethereum, Avalanche, Kusama, NEAR, Solana, Algorand, EOS, Liquid Network, Tron, Omni, and Bitcoin Cash’s Standard Ledger Protocol.

Although Tether has been severally called out for lack of transparency, its determination to provide a secure and stable digital asset across all platforms has not been rubbed. In August, the firm responded to one of the disinformation to regain the public's trust.

At the event of adding Polkadot to the list of Networks supported by Tether, Paolo Ardoino(Tether CTO) said; “We’re delighted to launch USD₮ on Polkadot, offering its community access to the most liquid, stable, and trusted stablecoin in the digital token space.” Tether Believes Polkadot is on a Trajectory of Grow & evolution.

According to Tether, Polkadot is growing and evolving, and they believe their contribution will help it continue to thrive. Polkadot is an interoperability network that connects, secures, and provides transactional scalability for multiple blockchains called parachains. Through the Polkadot relay chain, it has supported and developed the Web 3 & DeFi ecosystem, making cross-chain registries and cross-chain computation possible between the different blockchain Applications, Networks, and institutions.

By implication, the addition of Tether to Polkado’s ecosystem will help relieve the potential risks associated with market volatility and serve as a stable digital asset for DeFi DApps across multiple blockchains.

Being fully aware that Polkadot is an open-source project that is dedicated to web 3 development, the inclusion of the USDT in its ecosystem will further open up new potential in the decentralized web. In the same vein, Tether USDT is now live on 11 different blockchains, a testimony to their commitment to pioneer collaboration and interoperability within the growing crypto space.

*Gate.io reserves all rights to this article. Reposting of the article will be permitted, provided Gate.io is referenced. In all other cases, legal action will be taken due to copyright infringement.