Gate.io Blog Daily Flash | Global FX markets are in turmoil, and the Fed says Digital Dollar will not be anonymous and is not a priority

Daily Flash | Global FX markets are in turmoil, and the Fed says Digital Dollar will not be anonymous and is not a priority

On Wednesday, the pound is at a record low on concerns over Britain's radical tax cuts to spur growth, while the dollar edged up after Treasury yields surged overnight.

In the U.K., the sterling and government bonds are under intense pressure. The IMF said on Tuesday it is "closely monitoring" developments and urged the government to rethink last week's fiscal package intended to help the country deal with higher energy prices, and boost growth via tax cuts and supply measures.

The 10-year U.S. Treasury yield is at a 12-year high at 4%, Britain's 30-year yield is above 5% for the first time in two decades and, according to Goldman Sachs, global financial conditions are the tightest since 2009. Cryptocurrencies typically move in the opposite direction of yields.

Elsewhere in the world, Chinese regulators have asked banks to revive a counter-cyclical factor in their daily fixing rates for the yuan exchange rate, which could help slow the currency's decline. And the yen finds itself back at 145 per dollar, not far from the 24-year low where the Bank of Japan intervened last week selling dollars for yen.

Data from research firm Bespoke Investment Group shows the average stock in the U.S. markets was down 41.7% from its 52-week high as of Monday’s close. That they would need to see a rally of 71.5% to get back to its high. 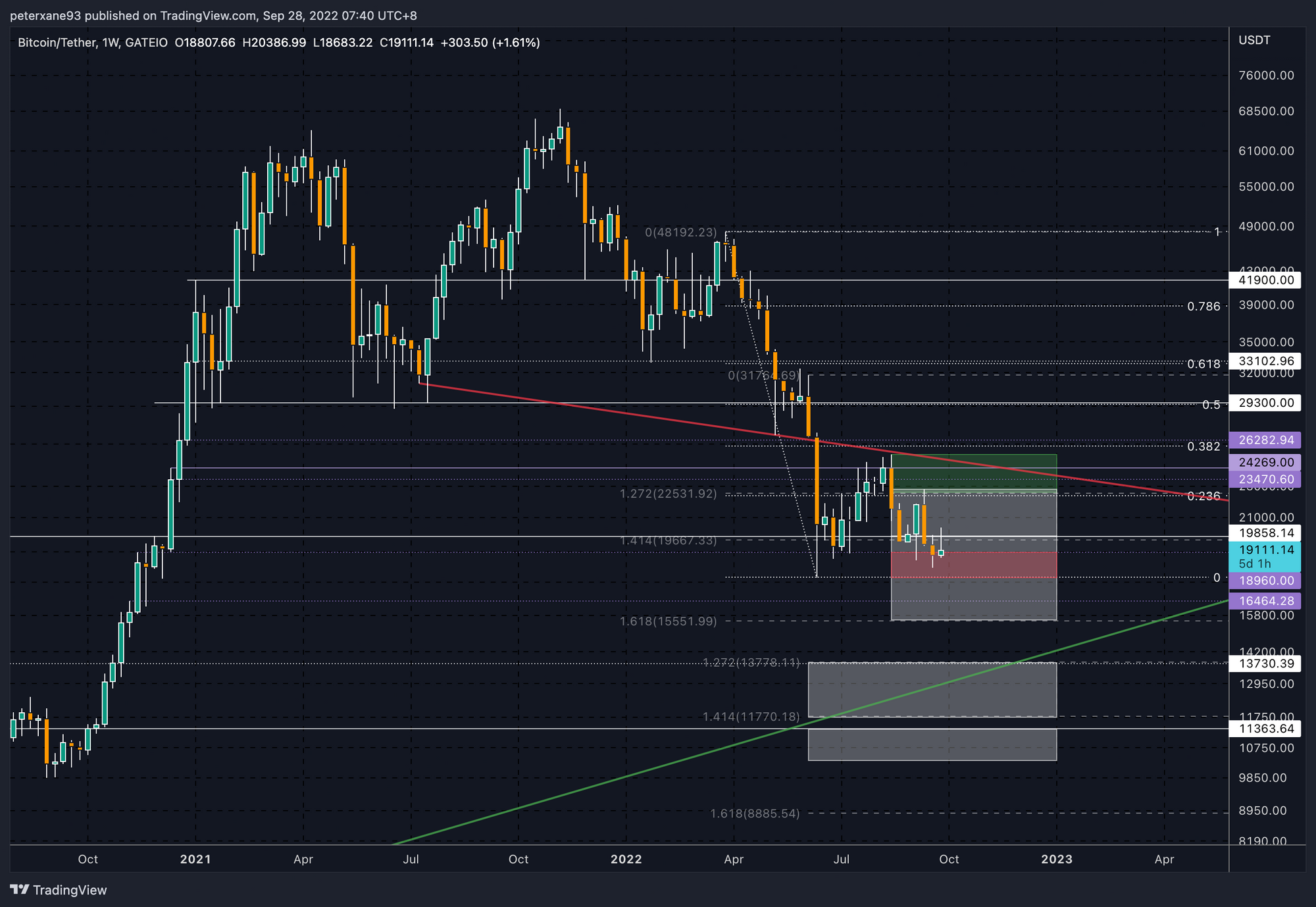 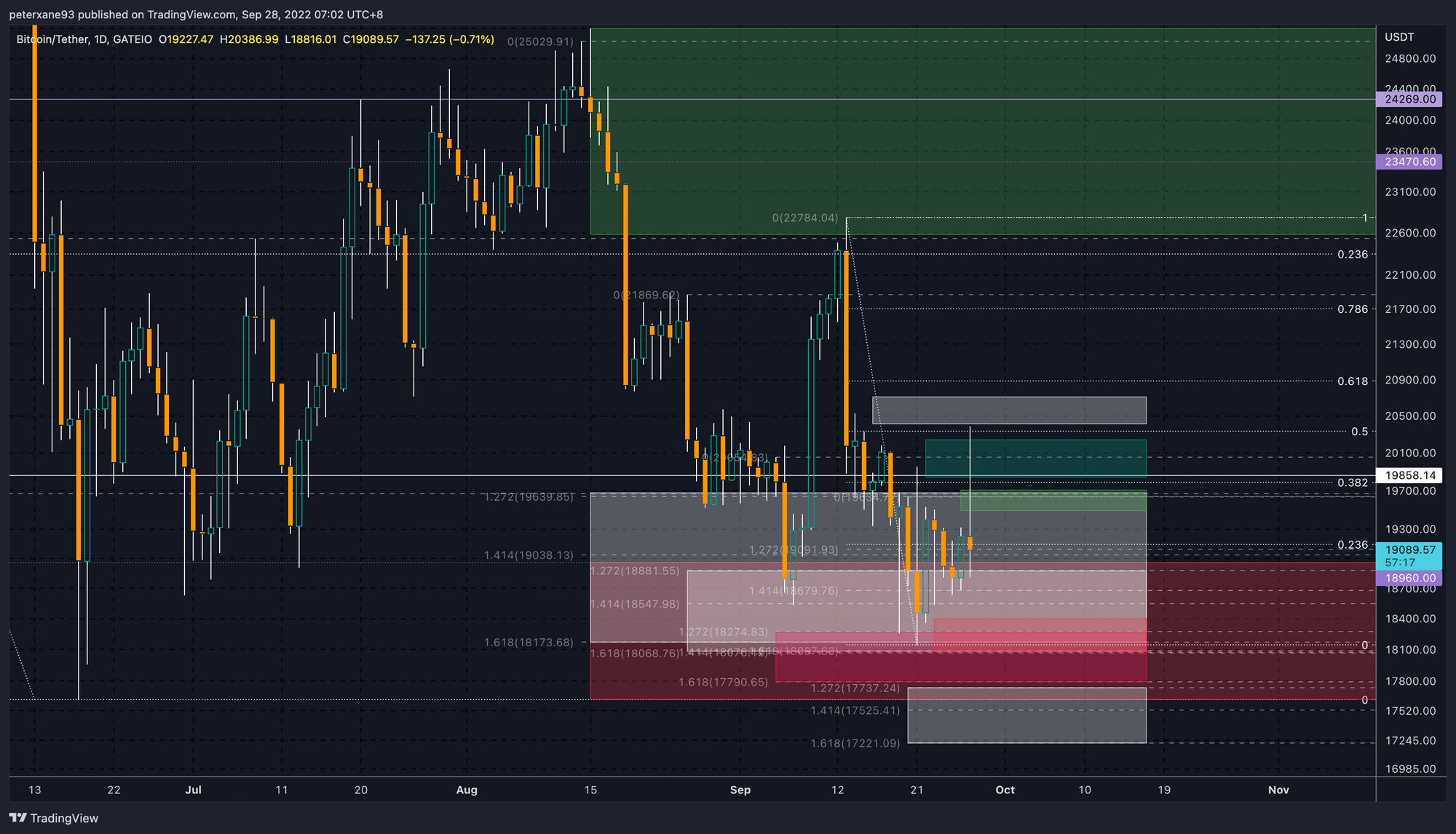 Bitcoin (BTC) saw massive bullish actions during Asian and European hours, up 7.27% at one point on the day. But since U.S. markets opened, BTC sank back to the lows and closed $ (%) on a daily candle.

Was yesterday a fakeout? Looking ahead, there are two resistance zones and two support zones to help us gauge market sentiments. On a daily candle, a close into a zone indicates the price has entered a new phase. A break beyond a zone indicates extreme sentiment on either side of the market. 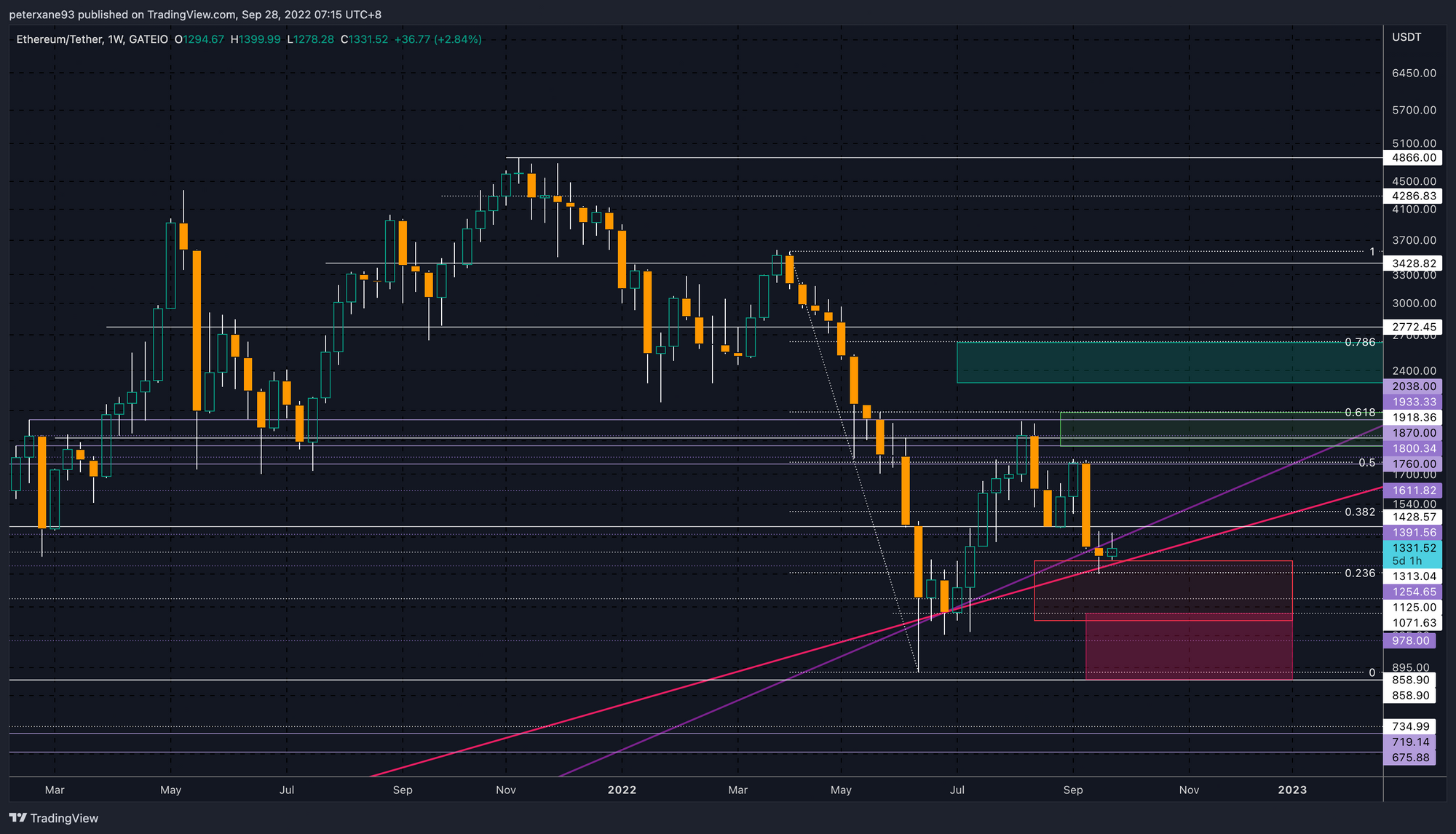 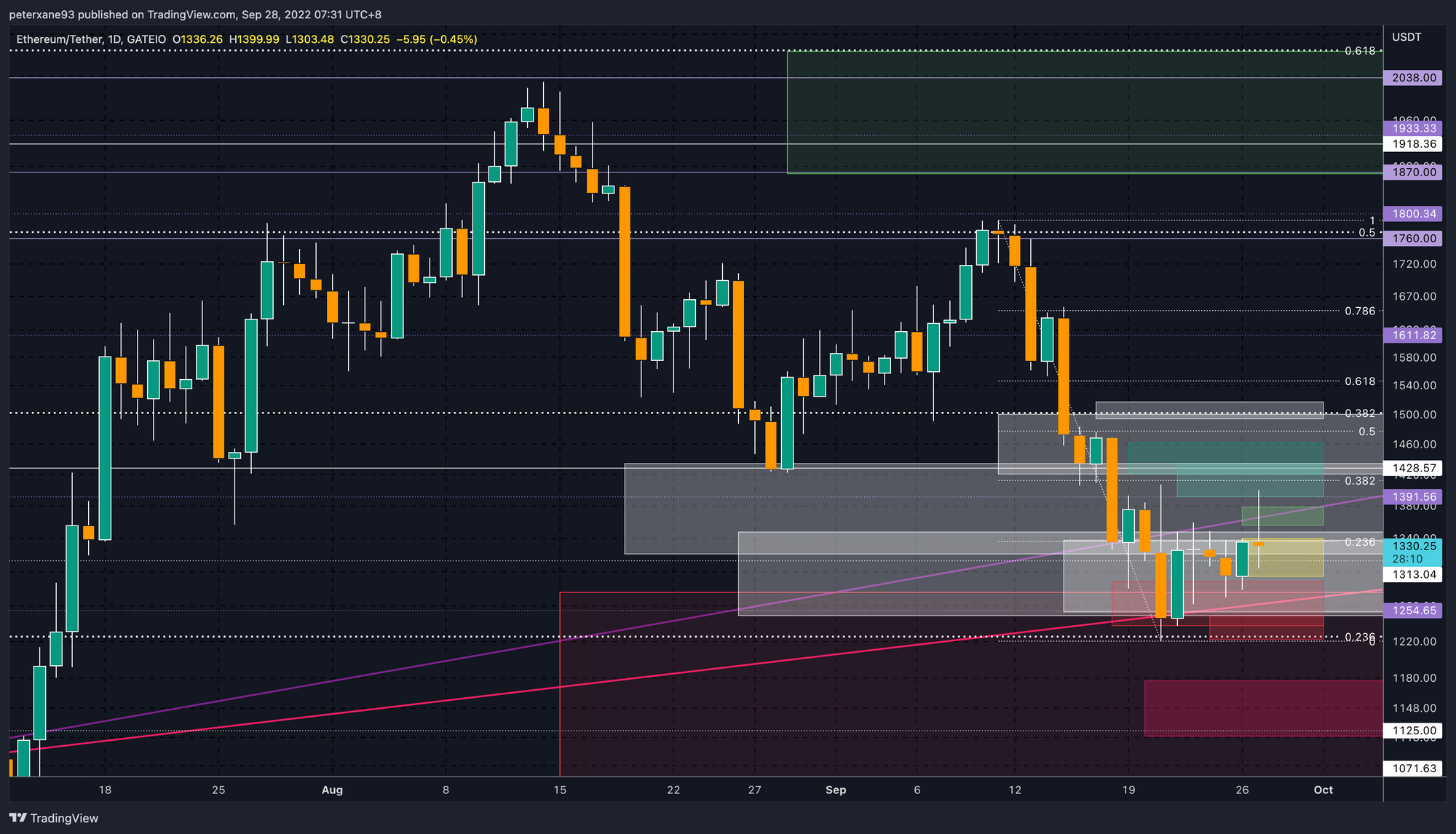 Following Bitcoin’s movement, Ether (ETH) also traded higher during early Tuesday session but ended up the day lower than its open price on a daily candle. The bounce-off from the weekly support trendline on Sep. 22 was a good sign for the bulls but now they will have keep buying pressure steady to get out of the weekly support zone.

In the coming days, there are two resistance zones and two support zones to keep on lookout for on a daily timeframe.


📌 The topic of the Day: U.S. Digital Dollar will not be anonymous, says Fed Chair Powell


In a speech this week, U.S. Federal Reserve Chairman Jerome Powell said U.S. CBDC would not be anonymous and outlined the characteristics of central bank digital currency (CBDC) if the U.S. were to pursue it.

He said that he will not push forward a U.S. central bank digital currency for the time being, but did elaborate that, if adopted, a CBDC would have several key characteristics: intermediated, privacy-protected, identity-verified, and interoperable.

Earlier this week, the Australia government said its CBDC pilot is looking for industry participants to make submissions on CBDC use cases. Dubbed the “eAUD,” the pilot is currently in the research stages and will be tested by participants in January next year.

Last week, The People’s Bank of China announced it was extending the trial of e-CNY to several new provinces including Guangdong and Sichuan.

As cryptocurrency markets mature and more governments begin to enact regulations and set down policies, how will the decentralized communities of today react to a changing landscape?


🔹 Terraform Labs Founder Do Kwon says he's 'making zero effort to hide' but declined to disclose his exact whereabouts. On Monday, South Korea says Interpol has issued a red notice for Do Kwon. Terraform Labs executives are wanted by the government for allegedly breaking capital market laws, following the $40 billion collapse of luna and terraUSD. On Tuesday, the Luna Foundation Guard (LFG) refuted claims from a CoinDesk report that suggested a wallet was set up for the LFG on Binance this month and linked to 3,313 BTS that authorities have sought to freeze.

🔹 IMF calls on global financial watchdog to lead crypto regulation push. Two new reports by the International Monetary Fund (IMF) on regulating stablecoins and unbacked cryptoassets have called on the Financial Stability Board (FSB) to set and lead global efforts on crypto regulation. The FSB reports to G20 officials.

🔹 The European Securities and Markets Agency (ESMA) said it will not need to adjust regulations for a decentralized ledger technology securities trading pilot program, clearing the next step for tokenized trading pilot program. ESMA's announcement comes in anticipation of the EU’s DLT Pilot Regime, which is set to kick off in March 2023. The recently finalized Markets in Crypto-assets (MiCA) regulation also falls under the EU’s digital finance package rolled out in September 2020.

🔹 OpenSea lists NFTs from the Layer 2 scaling network Optimism. New onboards NFT projects are Apetimism, Bored Town, Motor Headz, and Optichads. The move to add support for Optimism follows a series of other changes to the marketplace, such as integrating the NFT scarcity tool OpenRarity and automatic indexing for Solana-based NFTs.

🔹 This week’s fundraising activities include but are not limited to, Tech venture studio MPCH Labs raises $40 million Series A. The startup is developing a proprietary MPC6 engine based on multi-party computation (MPC) technology. Bitcoin payments firm Strike raises $80 million in a Series B funding round led by Ten31. Strike is building a payments protocol on Bitcoin’s Lightning network.

🔹 California Governor Gavin Newsom vetoed a bill that would create a license for companies operating in the crypto space. Newsom wrote in a Sept. 23 letter to the California State Assembly, “A more flexible approach is needed to ensure regulatory oversight can keep up with rapidly evolving technology and use cases, and is tailored with the proper tools to address trends and mitigate consumer harm.”

🔹 Australia’s CBDC pilot is looking for industry participants to make submissions on CBDC use cases. Dubbed the “eAUD,” the pilot is currently in the research stages and will be tested by participants in January next year. Last week, The People’s Bank of China announced it was extending the trial of e-CNY to several new provinces including Guangdong and Sichuan.

🔹 The European Central Bank is gauging whether a CBDC has a part to play in improving its interbank transaction activities. But the ECB is unlikely to be the first-mover around a central bank digital currency, said a member of its board. The evaluation and results of the project are anticipated in March 2023.

🔹 Hacker steals $950,000 from crypto vanity address as exploits continue. Hackers are continuing to steal cryptocurrency created by a tool called Profanity. The latest hack comes after Wintermute lost $160 million as a result of this issue.

🔹 Disney is hiring transaction lawyer for 'aggressive' NFT and DeFi plans. Disney CEO says the conglomerate is focused on “next generation storytelling.” Last year, it dropped the Walt & Mickey “Partners” NFT on the VeVe app for iOS and Android.

🔹 China GPU prices drop to new lows after the Ethereum Merge. The Nvidia GeForce RTX 3080’s price dropped from $1118, or 8,000 yuan, to 5,000 yuan within three months, according to a Chinese merchant.