In a week where red candlesticks have illuminated price charts across the entire market, Ethereum is no exception having shed 19.32% in the past seven days alone. Despite the successful deployment of the Merge and the critical updates to EIP-4895 to better tackle the network’s scalability trilemma, Ethereum has continued to slide further below its 90-day SMA and has dipped below its key support level. On the institutional side, it has been revealed that the Federal Reserve is prepared to negotiate how far it could raise its benchmark lending rates to curb record levels of inflation, with between 75 and 100 BPS predicted. However, analysts have hypothesised that whilst this initiative may help soften the blow of ever-inclining inflation levels, this move could deter investors from looking towards high-risk assets, such as cryptocurrency, with this potentially ‘nuking’ Bitcoin’s key support level of $18,800 and plunging it further into bearishness. On a more bullish note, however, Cardano has finalised preparations ahead of its much anticipated Vasil upgrade, confirming that ‘all critical mass indicators’ have been ‘achieved’.

Across the coming week, Ethereum will likely continue to face valuation drawdowns, with the bearish trend ensuing into the coming weeks. However, some analysts have predicted that the mass sell-off from whales is indicative of a potential price rebound in the coming weeks as momentum begins to spur. Similarly, with Cardano poised for a successful Vasil upgrade deployment, ADA may be privy to a rebound from its recent losses, potentially spurring it back towards the $1 threshold. However, this momentum may not extend to Bitcoin providing that the Federal Reserve continue to hike interest rates, with the potential for BTC’s key support level to plummet looming.

Ethereum Dips Below Key Support Level Despite EIP-4895 Update
Despite the past three months offering a relatively successful run for Ethereum, pushing it back over its 90-day SMA, on a more macro scale, Ethereum has been plummeting in value. Having shed a staggering 19.32% in the past week alone, the Merge has evidently offered little respite for investors. Contrary to previously held opinions, the Merge has only further tanked Ethereum’s valuation as whales orchestrated a mass sell-off at an ephemeral price peak – with this yet to fully rear its head in as critical EIP-4895 updates have been deployed.

With the current state of the Ethereum network, those with staked Ether are unable to withdraw their staked assets until the deployment of the Shanghai Upgrade which will withdraw from the Beacon Chain to the EVM. In an effort to better prepare the network for this essential upgrade, EIP-4895 was updated to better support valudator withdrawals from the Beacon Chain to the EVM. Providing the current sell off trend extends, this could potentially launch Ethereum further towards the $1,000 threshold. 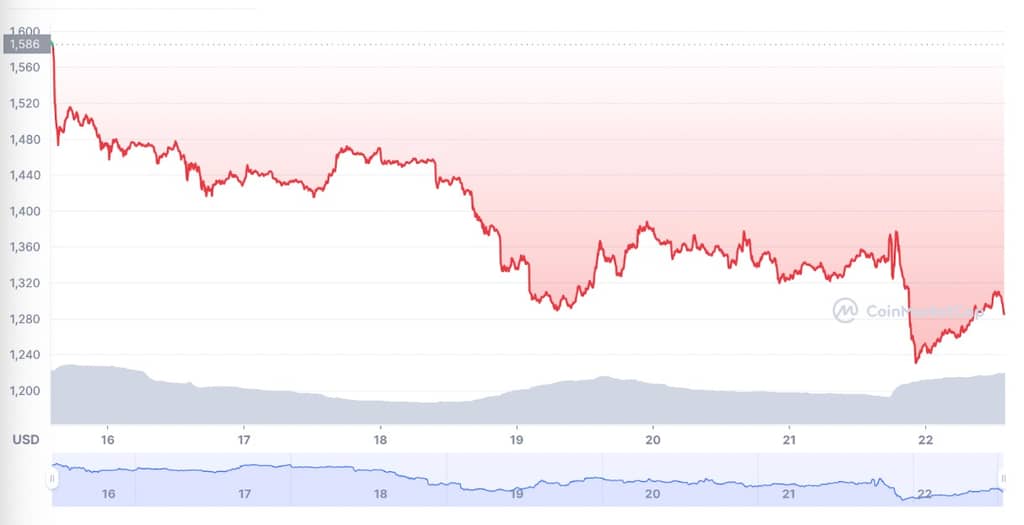 Ethereum has fallen beneath its 7-day SMA. Source: Coinmarketcap


Bitcoin Could Be ‘Nuked’ By Federal Reserve Hiking Rates By Up To 100 BPS
With inflation rearing its head and causing an international crisis, the Federal Reserve has announced that as a means of curbing the current state of inflation that it is negotiating the extent to which it can raise its benchmark lending rates. It is expected that these rates could extend between 75-100 BPS, with analysts concerned that this could diminish retail investor interest in high risk investment products such as cryptocurrencies, with Bitcoin most vulnerable.

Independent market analyst PostyXBT has hypothesised that rates of up to 100 BPS could ‘nuke’ Bitcoin and plunge it through it’s current technical support level of $18,800. However, he also suggested that Bitcoin’s chance of recovery is higher providing that the rate hike turns out to be lower than expected, or 50 BPS. Similarly, John Kicklighter, the Chief Strategist at DailyFX, commented that a 50 BPS rate hike would be bullish for the US benchmark stock market index.

Cardano’s Vasil Upgrade Geared Up For Success
Ahead of the much anticipated Vasil Upgrade, Cardano has announced that all three ‘critical mass indicators’ required to trigger the upgrade have been met and the deployment is ready to successfully launch. This comes in light of a recent announcement from Input Output Hong Kong, the parent company behind Cardano, confirming that within the last 48 hours 13 cryptocurrency exchanges had confirmed their support of the hard fork, representing a staggering 87% of Cardano’s liquidity.

After facing adversity earlier this year and failing to meet the intended June launch due to a bug that rendered the update incompatible with the network, Cardano is finally prepared to hard fork the network and tackle efficiency and scalability issues within the network head on.

Author: Gate.io Researcher: Matthew Webster-Dowsing
* This article represents only the views of the researcher and does not constitute any investment suggestions.
*Gate.io reserves all rights to this article. Reposting of the article will be permitted provided Gate.io is referenced. In all other cases, legal action will be taken due to copyright infringement.

ETH + 1.26%
Share with：
Follow us：
Trending
Crypto market will be in upheaval in September. How will investors survive?
What Is the LUNC Tax Burning Proposal?
What Is the Future of Ethereum?
High Possibility of a 75 Point Rise in Federal Fund Rate in September
Daily Flash | Cryptocurrencies rose on US markets relief rally but Global bond yields are not looking good for the economies
Claim 20 Point now
Exclusively for Newcomers: complete 2 steps to claim Point immediately!