Gate.io Blog Santiment data Says 46.1% of Ethereum PoS nodes are controlled mainly by 2 addresses. Should we be worried?
Hotspot

Santiment data Says 46.1% of Ethereum PoS nodes are controlled mainly by 2 addresses. Should we be worried? 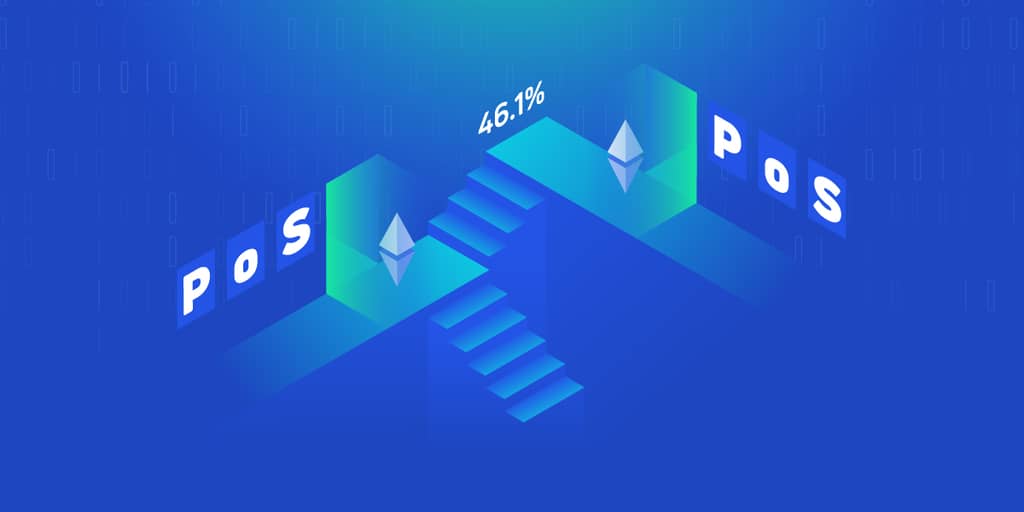 🔹 Two addresses dominate 46.1% of the Ethereum PoS nodes, according to Santiment.

🔹 The PoS requires high capital, and only a small number of people will be able to become validators in the network.

🔹 Validators with large stakings can have a massive influence on transaction verification.

🔹 The network is prone to severe damage and the risk of a "51 percent attack," with participation in validation getting too centralized.

🔹 Santiment pointed out that the dominance of the two addresses is "something to watch" and not taken lightly.

🔹 Concerns are spurred regarding Ethereum's decentralization goal and the impact of the Merge on centralization.

🔹 This is not enough to assume that the PoS network is unsuccessful since the Merge is still in its nascent stage.

Eyes on the Merge Update

After the whole celebration of a successful merge on the Ethereum network, crypto analysts are still on the watch for the impact of the upgrade on the network. The on-chain activity of Ethereum validators is among the key metrics being monitored closely. According to Santiment, recent findings show that two addresses dominated 46.1% of the Ethereum PoS nodes in the hours following the Merge last Thursday.

This anomaly has caused a significant stir in the crypto community as such updates pose a concern about the Ethereum network's aims for further decentralization after the Merge. Santiment also pointed out that the dominance of the two addresses accounting for 46.1% of the validated blocks, is "something to watch" and not taken lightly.

The Proof of Work model, due to its high energy-intensiveness, made it difficult to distribute the control of the blockchain within all ETH holders, but with the Merge, the Proof of Stake offers to save energy and guarantee further decentralization of the Ethereum network.

However, the major concern with PoS is that only a small number of people will be able to become validators in the system due to the high capital (32 ETH)requirement and the technical difficulty of setting up a validator system. A few hours after the Merge, the cryptocurrency data feed and analytics company, Santiment, posted a picture of its "Ethereum Post-Merge Inflation" on Twitter.
Data from the shot shows that just two addresses controlled 46.1% of all nodes that ran on the Ethereum PoS chain within the time. 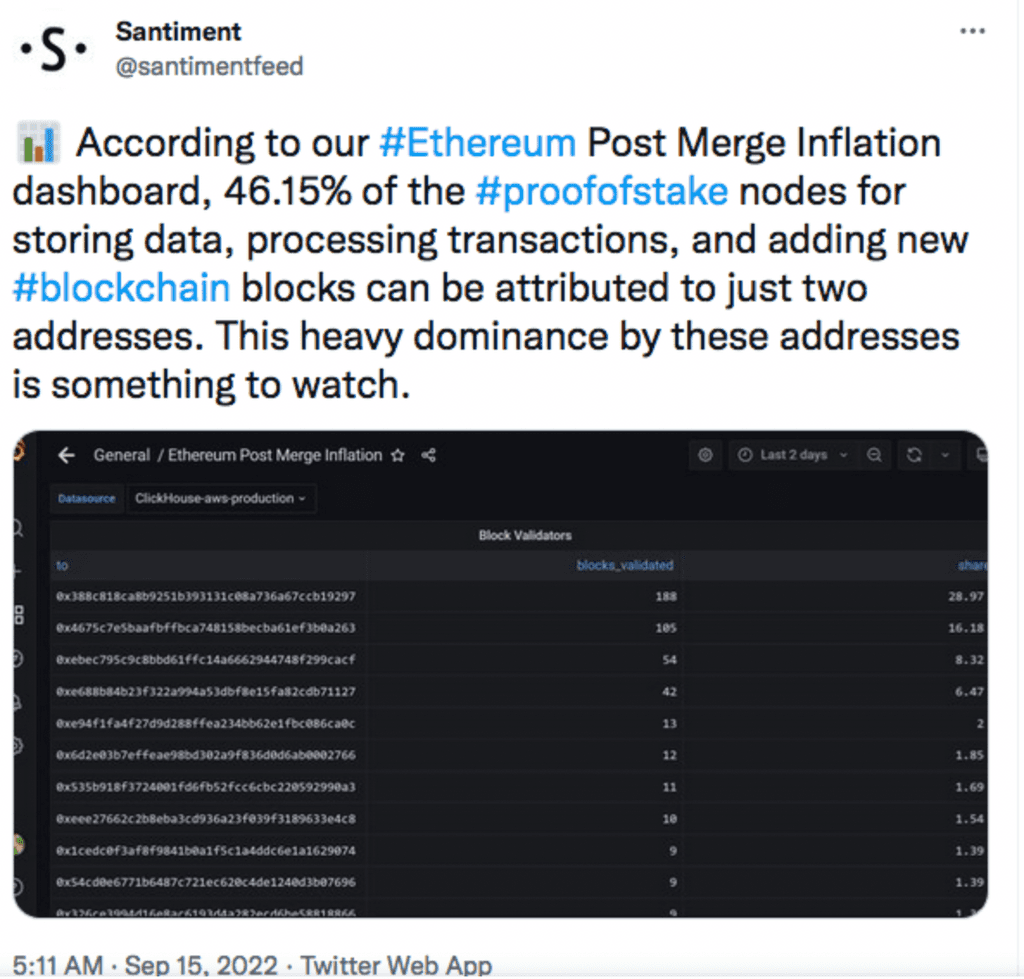 Moreover, Martin Köppelmann, the Gnosis co-founder, disclosed in a tweet that Lido and Coinbase were the owners of these two addresses. According to him, "420 of the previous 1,000 blocks have been generated by only Lido and Coinbase".

The centralization of the data by Santiment raises a worry about the possibility of meeting the Ethereum network's aims for further decentralization after moving to a Proof of Stake network.


The Risk of centralization

Security experts also point out that because the new consensus mechanism solely depends on validators to verify transactions, the risk of a "51 percent attack" is high, with participation in validation getting too centralized.


Reactions from the Community

Analysts who had predicted increased centralization before the Merge remain worried about the current data from Santiment.

Meanwhile, in response to the data, a follower, "Soroush," claimed that both addresses might be linked to the Ethereum Foundation and the global financial bank JPMorgan Chase & Co. She added that after six years, her claims had been vindicated, saying that, "Ethereum is the biggest lie and scam in blockchain and financial history.

Conversely, Timjanssen disputed Santiment data in another tweet, claiming that the addresses are flash bot relays built up of tens of thousands of validators using a single relayer and that these addresses may have served only as relayers, not as validators. 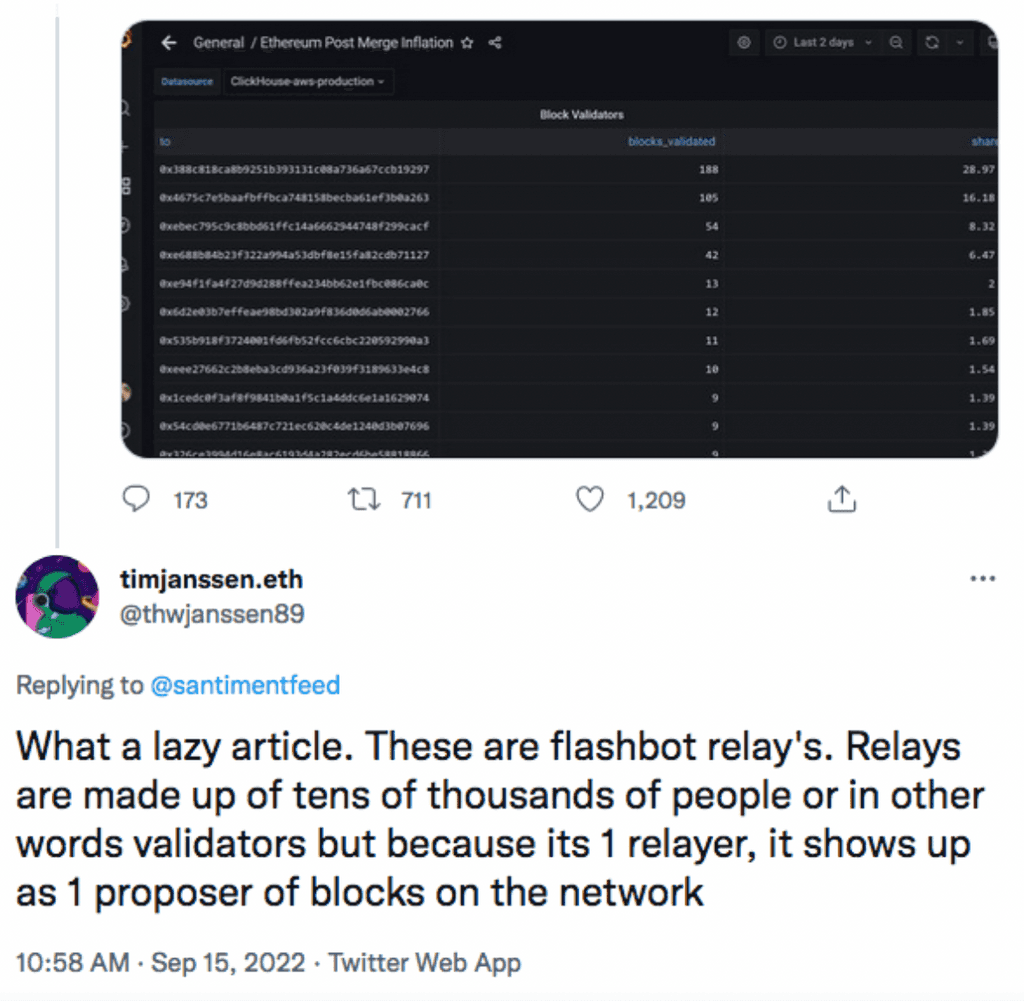 
Should we be worried?

Though the 46.1% control of the two wallets during the early hours of the Merge thwarts Ethereum's decentralization goal, it is not enough to assume that the goal for the PoS network is unsuccessful since the Merge is still in its nascent stage.

Developers upheld the switch from proof-of-work to proof-of-stake as a means to overcome centralization on the Ethereum network by making it more difficult for individuals to tamper with the Ethereum ledger. But early reports of network consolidation have spurred concerns about the likelihood of these aims being actualized.


Author: M. Olatunji, Gate.io Researcher
* This article represents only the views of the observers and does not constitute any investment suggestions.
*Gate.io reserves all rights to this article. Reposting of the article will be permitted provided Gate.io is referenced. In all other cases, legal action will be taken due to copyright infringement.

BTC + 1.92%
ETH + 1.31%
GT -0.02%
Share with：
Follow us：
Trending
Crypto market will be in upheaval in September. How will investors survive?
What Is the LUNC Tax Burning Proposal?
What Is the Future of Ethereum?
High Possibility of a 75 Point Rise in Federal Fund Rate in September
Daily Flash | Cryptocurrencies rose on US markets relief rally but Global bond yields are not looking good for the economies
Claim 20 Point now
Exclusively for Newcomers: complete 2 steps to claim Point immediately!