Gate.io Blog Market Trend 12/9 - 18/9｜Analysts predict the current BTC cycle is ‘the same as any other’, XRP rebounds by 7.6% as lawsuit judgement briefs are made public

Market Trend 12/9 - 18/9｜Analysts predict the current BTC cycle is ‘the same as any other’, XRP rebounds by 7.6% as lawsuit judgement briefs are made public 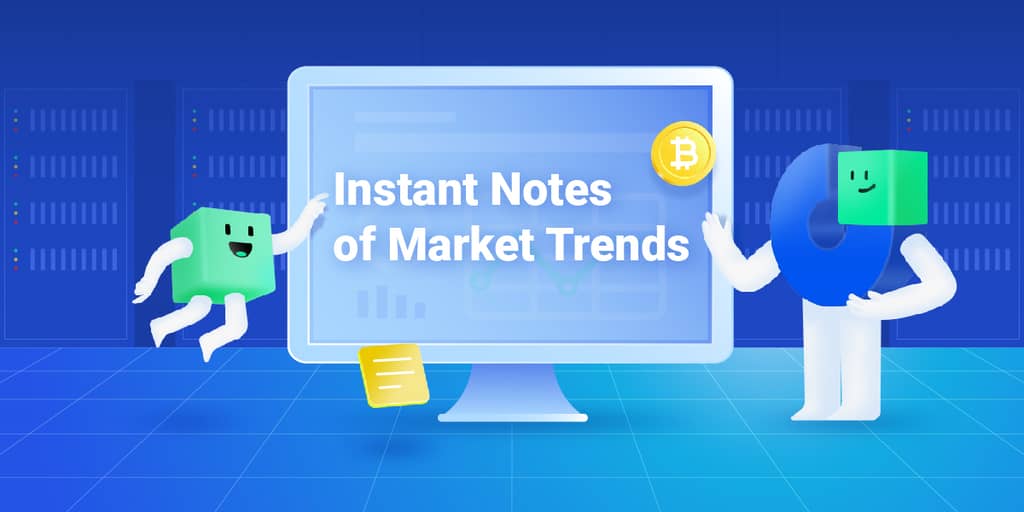 With crypto winter arriving early for the majority of the market, Bitcoin has perhaps been the hardest hit, having shed 71.2% from its all-time high of November 2021. However, analysts have revealed that the current Bitcoin trajectory is simply a reflection of previous cycles and that despite the dip below its current 7-day SMA, Bitcoin’s price performance is fortunately not abnormal where realized cap HODL waves metrics are concerned. On a wider view of the top ten cryptocurrencies, a troubling level of valuation volatility has struck Cardano, plunging it beneath the $0.5 threshold once again ahead of the eagerly anticipated Vasil Upgrade. On the institutional side, further developments in the Ripple vs SEC case have led to sharp green candlesticks for XRP as judgement briefs for the case have now been unveiled to the public, as well as redaction documents filed by an anonymous third party as a means of protecting the integrity of the anonymous third party’s employees.

Across the next week, its likely BTC will continue along its horizontal trading trajectory as short-term holders battle to sell at peaks and long-term holders accrue at the troughs, bringing the majority of the market along on this repetitive journey. However, providing Cardano’s Vasil Upgrade deployment on September 22nd is successful and as public opinion begins to favour Ripple in the ongoing lawsuit, both ADA and XRP may break free from the hegemony and rally as the teams behind them accelerate initiatives to bring the two into the future. 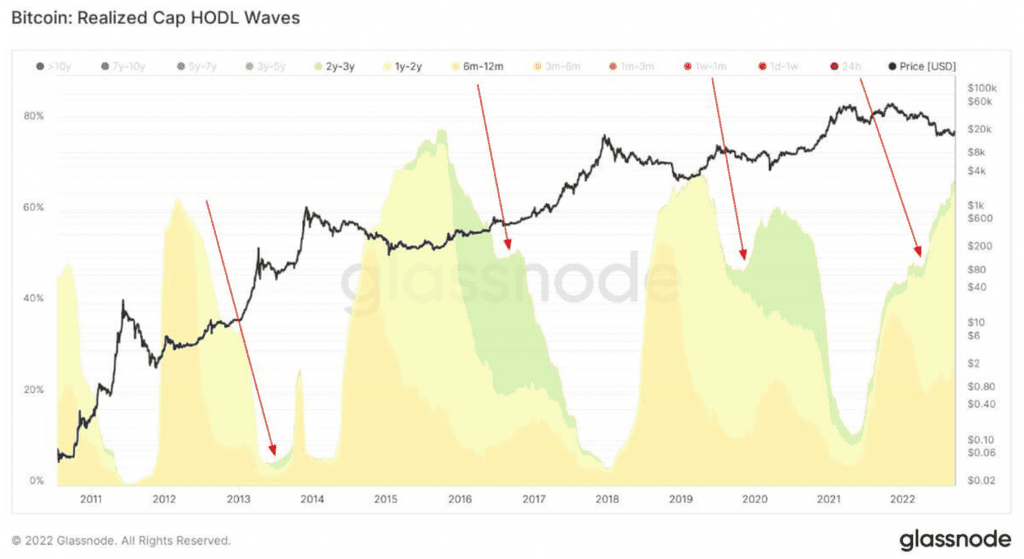 2022 has undeniably been a dim year for BTC maximalists. With BTC dipping below its 365-SMA upon its entry into the year, with only an ephemeral moment of respite, BTC has progressively shed its value and descended back into the lower $20k range, with this $25k acting as a new resistance threshold in recent months. Having accrued substantial losses in the past nine months alone, the general sentiment remains bearish, with few new investors pouring funds into the asset.

However, analysts have confirmed that this current cycle is reflective of previous price activity seen in years prior, with this cycle being minimal in comparison to the infamous 2018 and ‘covid’ crashes respectively. In order to consolidate this hypothesis, analysts have turned to ‘realized cap HODL waves’ metrics, which group BTC supply in circulation into different age bands and the changes witnessed by these bands over the years – in other words, this metric allows analysts to identify whether long-term or short-term holders are buying, selling, or ‘hodling’ their BTC and for how long. 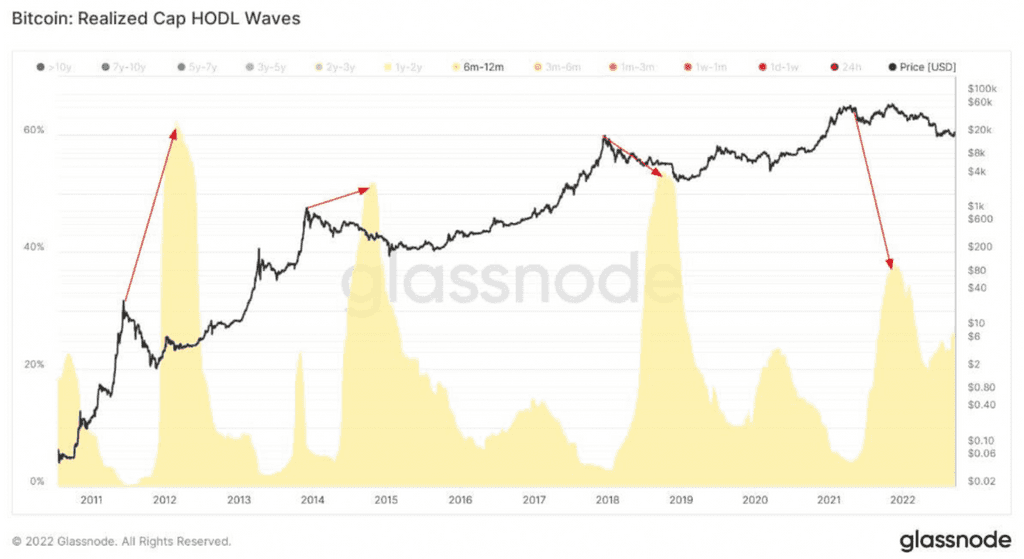 
Reflecting on the above chart, it is evident that short-term (6-12 months) holders have a tendency to buy BTC at its price peaks or when bullish sentiments arise. Yet, as short-term holders alleviate their ‘FOMO’, BTC is swift to decline once again, leaving these investors with unprecedented losses. Comparatively, long-term holders (2-3 years) comprise a bigger portion of the holding supply compared to the former, indicating that bullish long-term sentiments remain strong amongst those well versed in BTC’s market activity.

However, based on the minimal action demonstrated in the above charts, analysts have confirmed that this current cycle remains substantially smaller than previous cycles and that the current market conditions need to further mature before BTC is privy to a strength comparable to the 2021 bull run. 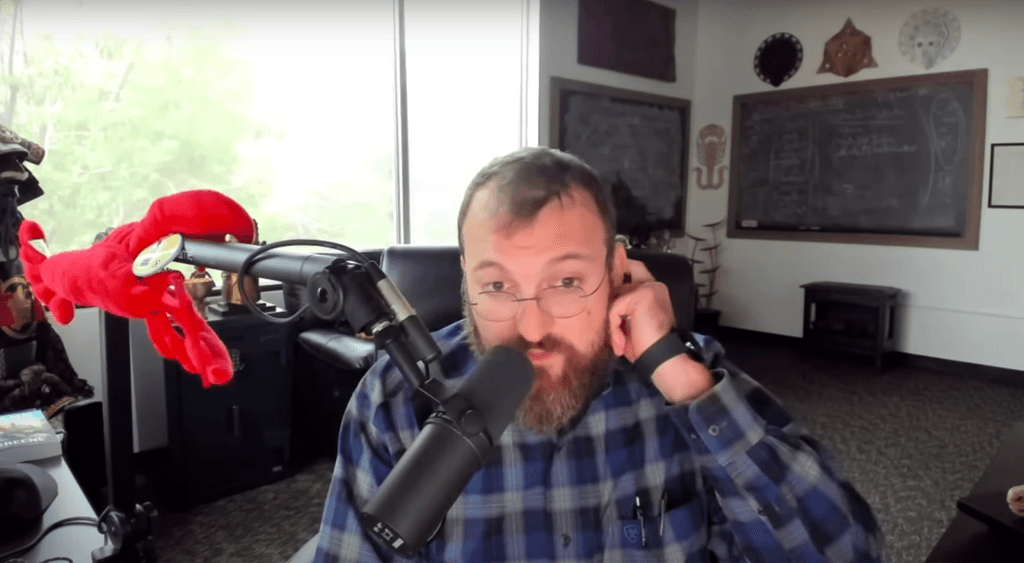 With Cardano founder, Charles Hoskinson, confirming the 22nd as the historic deployment date, the Cardano network is gearing up for the ‘Vasil rocket to take off’, according to a recent statement from Hoskinson. With the deployment expected to be a more gradual transition into the future of Cardano, as a result of severe technical reasons that are yet to be expanded upon, the full effects of this transition are likely to be witnessed at their full potential by the 27th of September.

Despite the bullish sentiment one would expect to shroud Cardano in light of the September 22nd deployment of the Vasil Upgrade, the charts have bled red as ADA has teetered below the $0.50 threshold and descended into lows of $0.45 territory.

However, to redeem this recent bearish activity, trading expert Michael van de Poppe has hypothesised that ADA will target $1 in light of the upgrade, despite the current pulldown. According to Poppe, the lack of momentum before the upgrade is indicative of the potential rally that could spur ADA back into more bullish territory. Poppe noted, ‘This brings massive opportunities if the Vasil hard fork is going to take place in a positive manner which is quite similar to the Ethereum (ETH) merge’.

XRP rebounds by 7.6% as lawsuit judgement briefs are made public 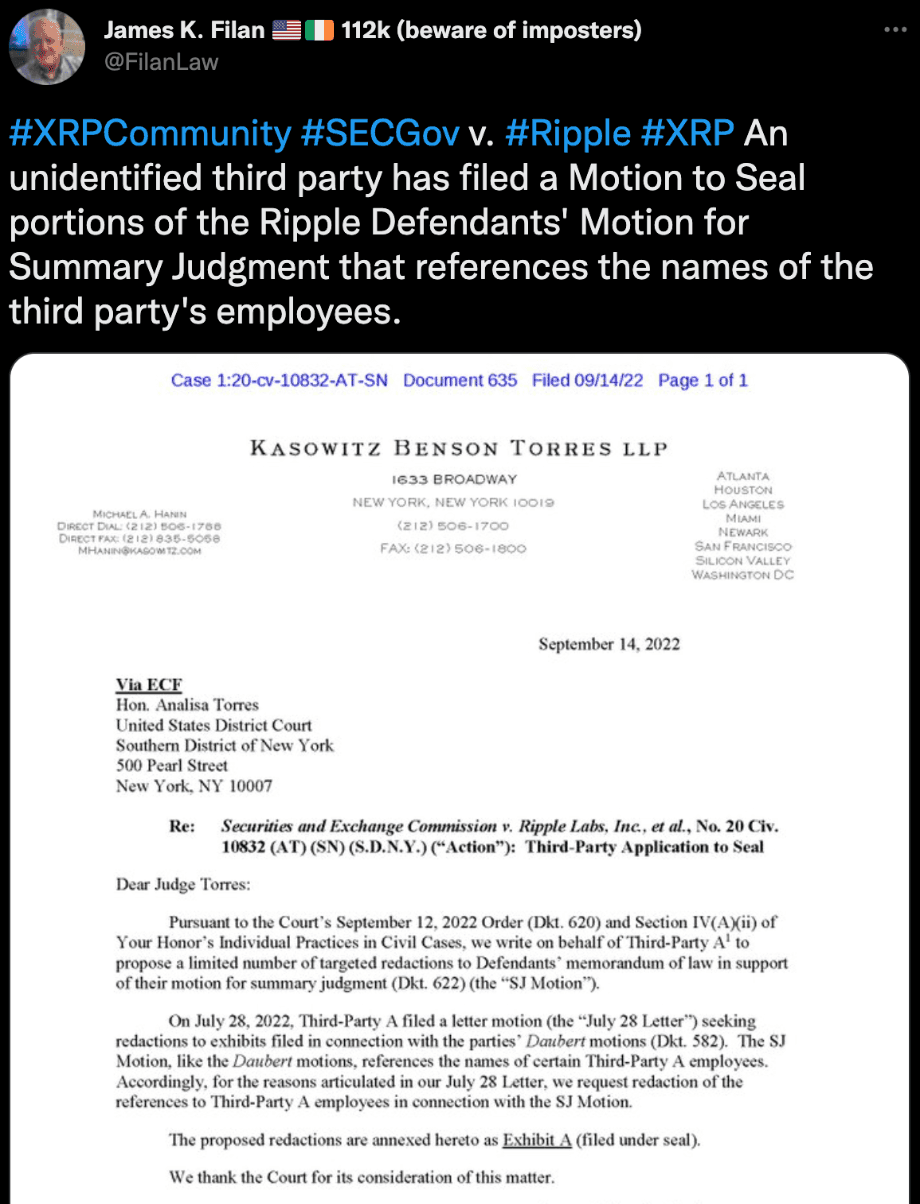 Shared documents regarding the push for Ripple employee anonymity in the ongoing lawsuit. Source: Twitter

This comes in light of the official release of the Ripple-SEC motion for summary judgement that has been made public, which has been controversially commented on by Ripple General Counsel, Stuart Alderoty. Alderoty noted: ‘After two years of litigation, the SEC is unable to justify any contract for investment…and cannot satisfy a single prong of the Supreme Court’s Howey test.’.

In another significant turn of events, an anonymous third party has also filed a motion to seal portions of the Ripple Defendants’ Motion for Summary Judgement that references the name of the third party’s employees. Having submitted earlier redactions in relation to the Daubert Motions in late July, the party, referred to as ‘B’, has maintained that these redactions do not constitute a ‘judicial document’, thus justifying the sealing of information, particularly as the redactions have no bearing on the motion.

However, it is critical to keep an eye on the progression of the case to ascertain whether Ripple and its associated parties will be branded with the label of a ‘security’ or supporters of this – as this will undeniably reverberate throughout the entire crypto market and spark debate surrounding similar assets.


Author: Gate.io Researcher: Matthew Webster-Dowsing
* This article represents only the views of the researcher and does not constitute any investment suggestions.
*Gate.io reserves all rights to this article. Reposting of the article will be permitted provided Gate.io is referenced. In all other cases, legal action will be taken due to copyright infringement.