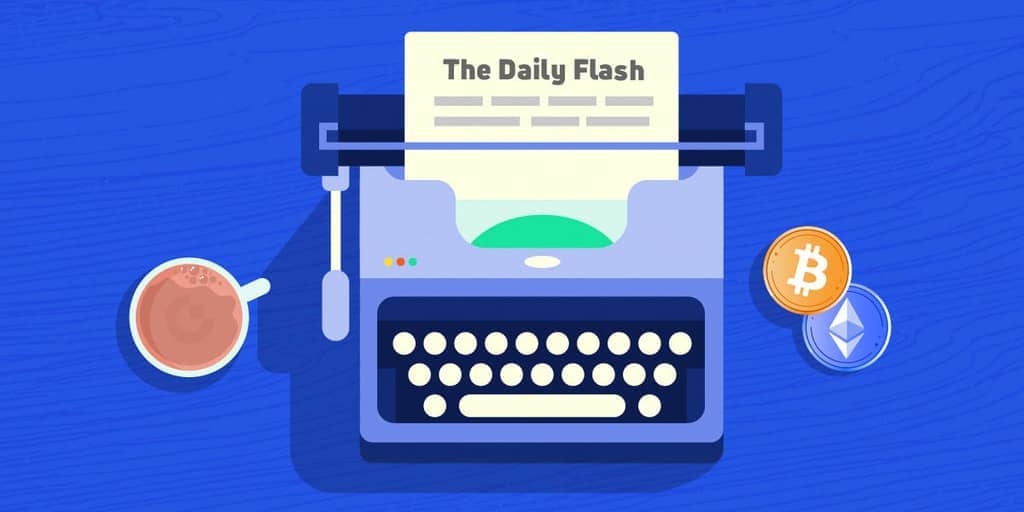 Today's Headline - Crypto lending platforms react to high ETH borrowing by traders ahead of The Merge: The Block Report

Holders of ETH are hoping for a potential bonus in the form of a "powETH" token airdrop following The Merge. Many have taken the approach to borrow ETH on the current blockchain with plans to repay it after The Merge and sell any forked tokens they receive. As such, DAO-based lending protocols are taking varying approaches to reduce widespread market disruption in light of the surge in borrowing activity.

Leading DAOs such as Aave, Compound, and Euler which support the underlying infrastructure of ETH lending markets are taking different approaches to mitigate risk and market disruption ahead of The Merge.

In a recently published risk mitigation plan, Aave has proposed to halt ETH borrowing and increase the variable borrow APR at 100% utilization from 103% to 1,000% in the interim period leading up to The Merge, citing three latent risk factors related to increasing ETH utilization that include potentially difficult or impossible liquidations, negative APY on ETH positions, and an increase in ETH withdrawals by regular suppliers.

In contrast to both Aave and Compound’s activeness, Euler Labs co-founder and CEO Michael Bentley proposed a starkly different approach, that Euler refrain from altering its interest rate model for ETH, allowing borrowers to accumulate ETH in the days leading up to the Merge, and letting lenders fill the demand. 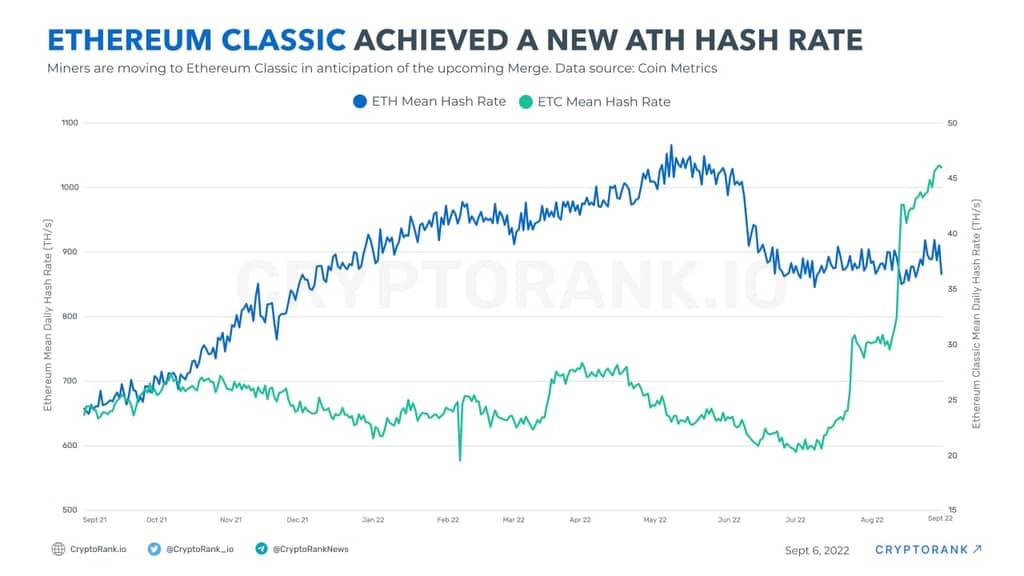 Due to Ethereum's upcoming merge, scheduled to happen next week on September 15, miners have already begun switching to other Proof of Work cryptocurrencies, mostly to Ethereum Classic. As a result, ETC hash rate has significantly risen over the past two months and reached a new ATH of 46.15 TH/s, and it's price reacted to the trend with growth. 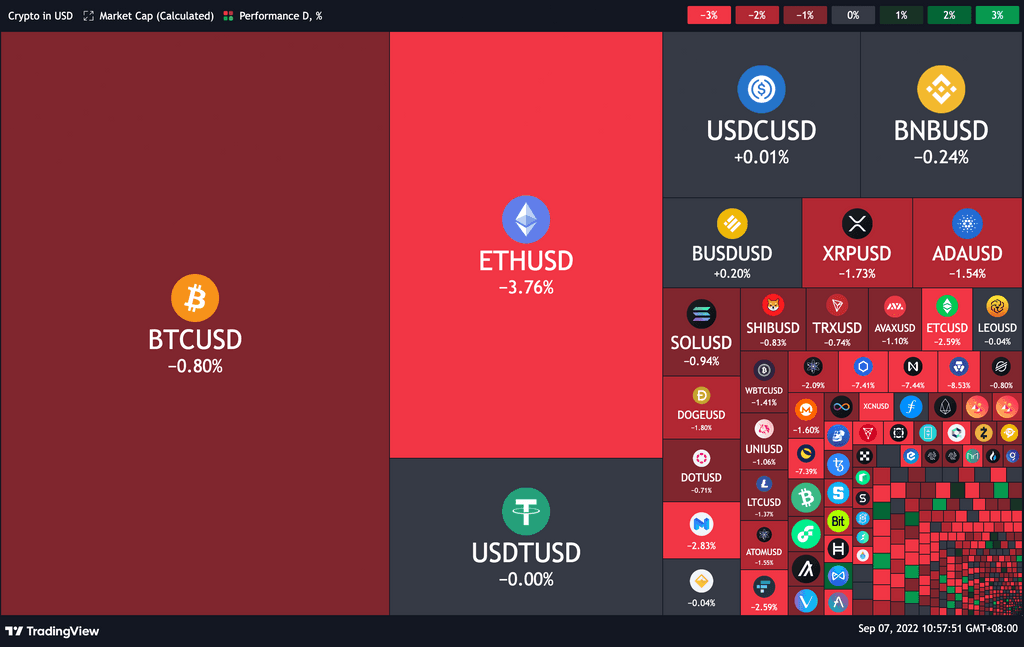 Up until the US market opened during Tuesday trading, Layer 1 protocols were pumping like it was 2021. Investor sentiment was buoyed after the Bellatrix hard fork, the first stage of Ethereum’s much-anticipated Merge, was completed successfully.

According to a Tuesday report by CoinShares, crypto investment products had roughly $9 million in inflows last week, stopping a three-week run of outflows.

“This follows the recent FOMC meeting at Jackson Hole where a much more hawkish view was expressed, unexpected by some investors,” CoinShares Head of Research James Butterfill said in the report. Some analysts predict another 75 basis point rate hike this month. 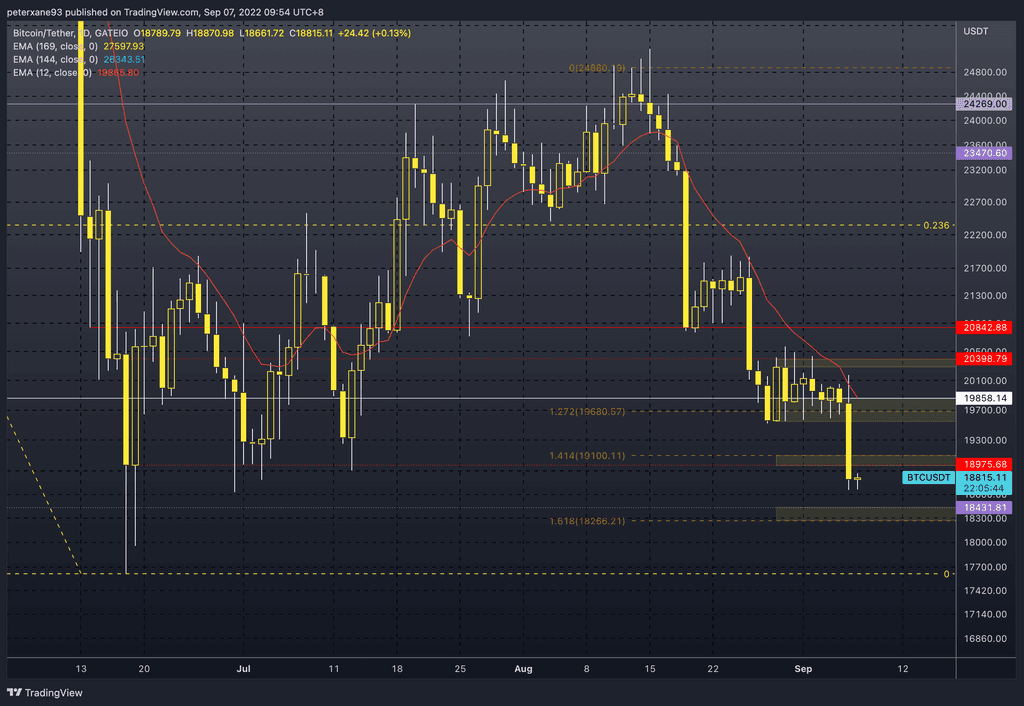 In terms of technical outlook, Bitcoin (BTC) has broken the stagnant phase of the past 9 days and plunged below two support zones, one was formed between the opening price on a daily candle last Monday ($19,558) and the monthly support of $19,858, while the other was formed between a daily support level of $18,975 and the 141.4% Fibonacci extension level ($19,100) measured from Aug. 13 - 19.

As a third bearish wave can be clearly seen on the daily chart, the bears will now attempt to bring the price of BTC towards the next support zone formed between the weekly support level of $18,431 and the 161.8% Fibonacci extension level ($18,266) measured from Aug. 13 - 19.

To invalidate this outlook, the bulls will have to use the aforementioned support zone as an anchor point to protect prices from falling further. 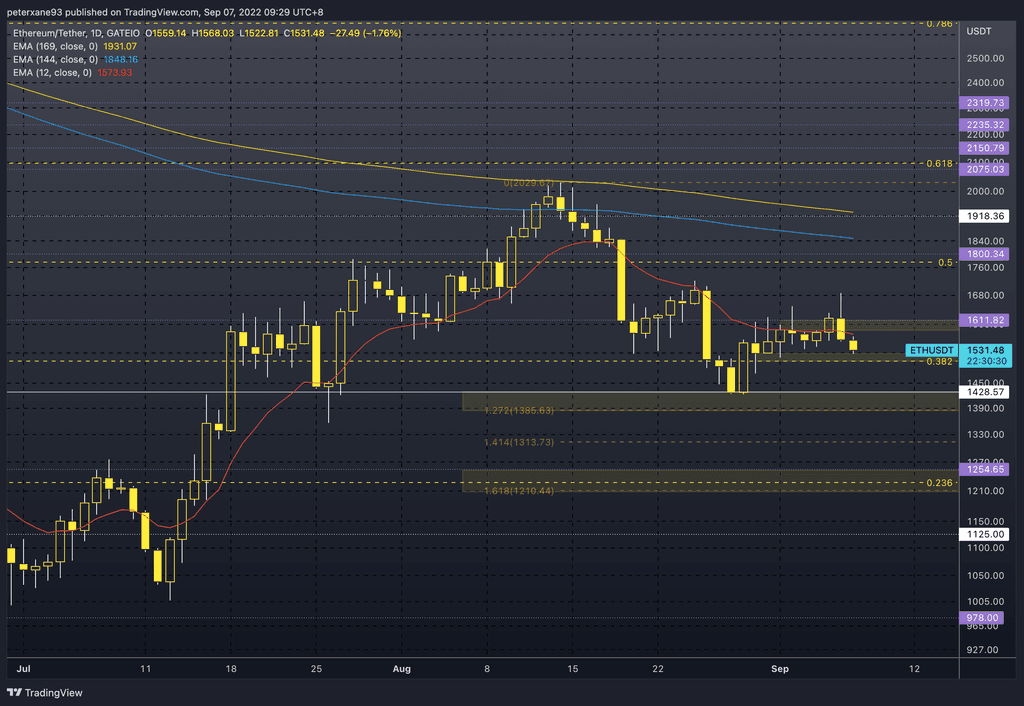 To invalidate this bearish outlook, the bulls will have to hold above the current support zone to prevent the complete forming of a lower wave on the daily chart. If they fail to do so, the monthly support level of $1,428 may be the last straw before seeing ETH plunges further below. 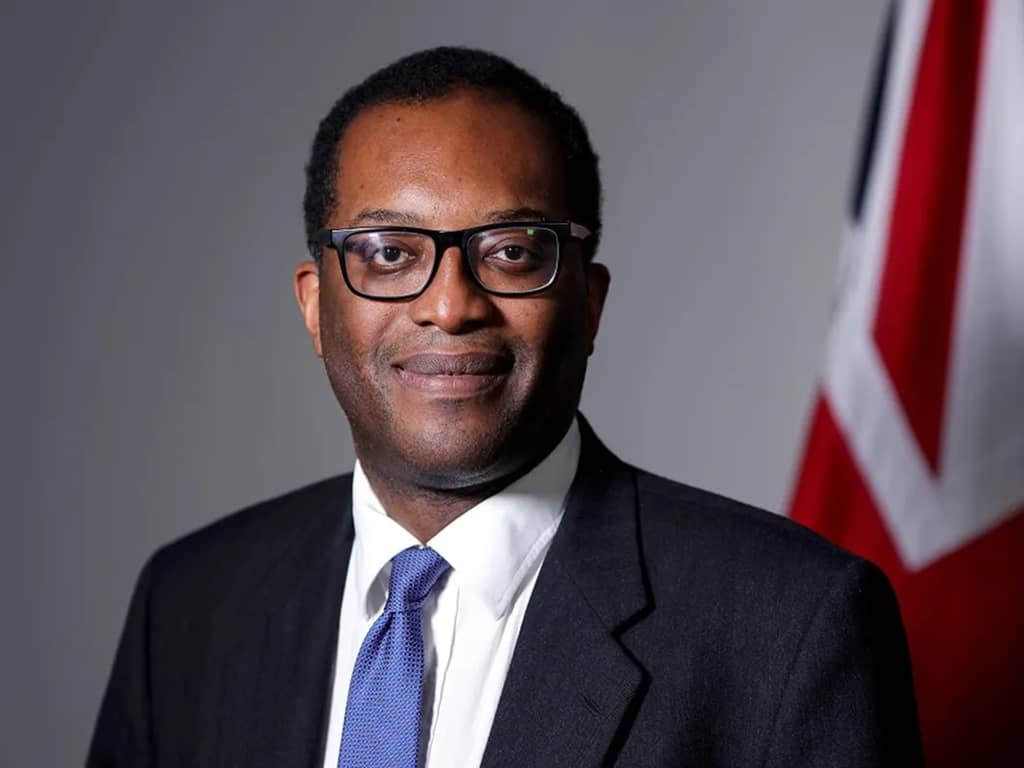 The governing Conservative Party picked Liz Truss as leader of the party and the country’s prime minister on Monday, and Truss named Kwasi Kwarteng as the country's next finance minister.

In a report from June 2021 titled UK Innovation Strategy, Kwarteng’s department identified blockchain systems as one of the “seven technology families that will transform our economy in the future.”

In July, his previous department announced a 53 million British pound (US$61.3 million) fund for supporting technological innovation, including the use of blockchain in supply chains.

However, It is unclear to what extent Kwarteng supports former Finance Minister Rishi Sunak’s crypto vision for the country as the latter had plans to turn the country into a crypto hub before he resigned from the government in July. 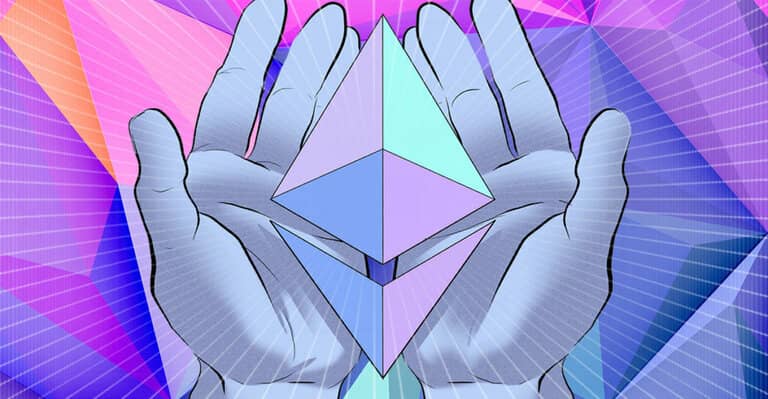 Ethereum activates Bellatrix upgrade as last step before The Merge 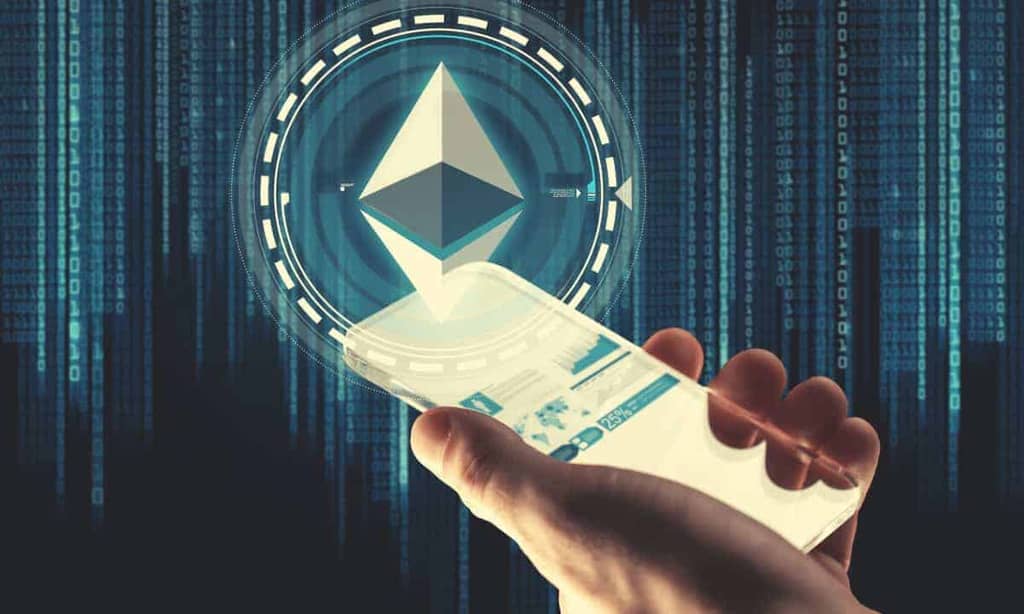 More Than 94k ETH Staked Ahead Of Ethereum Merge 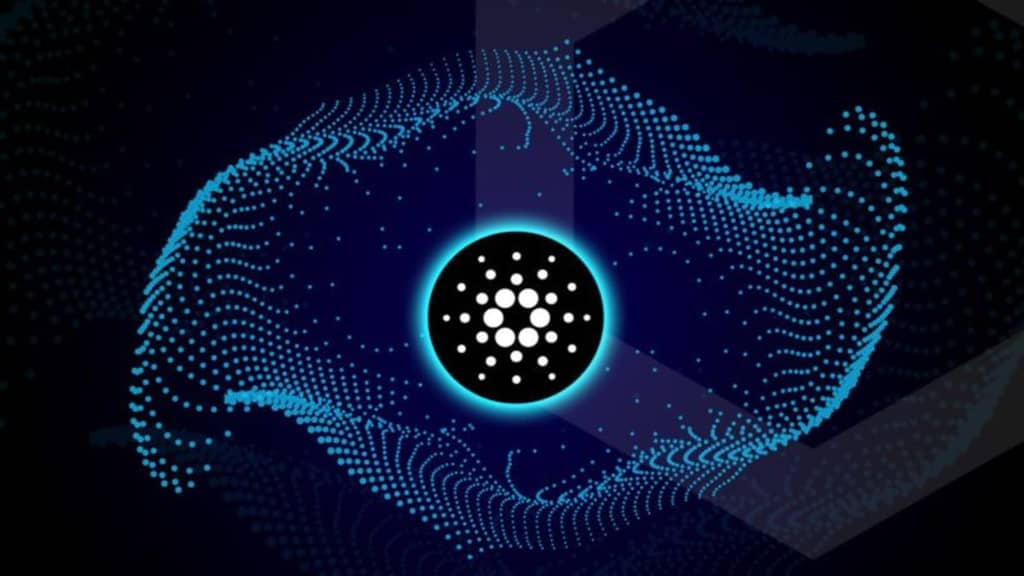 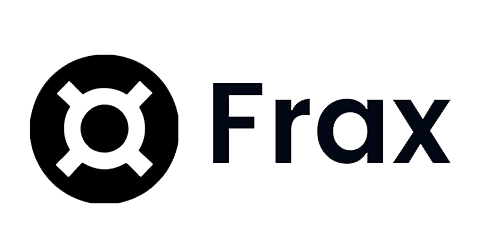 Frax Finance launches Fraxlend, its own borrowing and lending market


Reddit NFT avatars selling for a premium on OpenSea 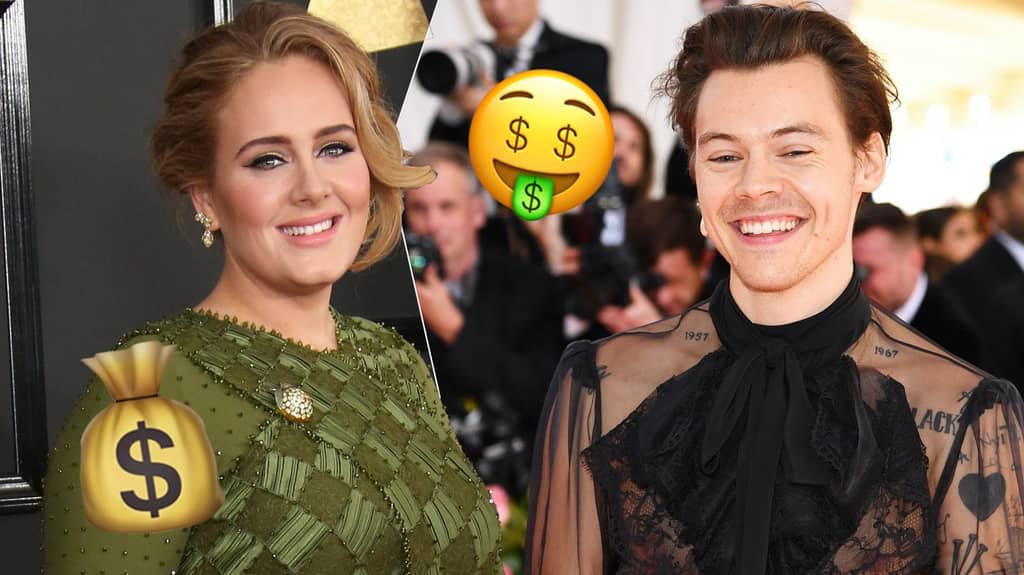 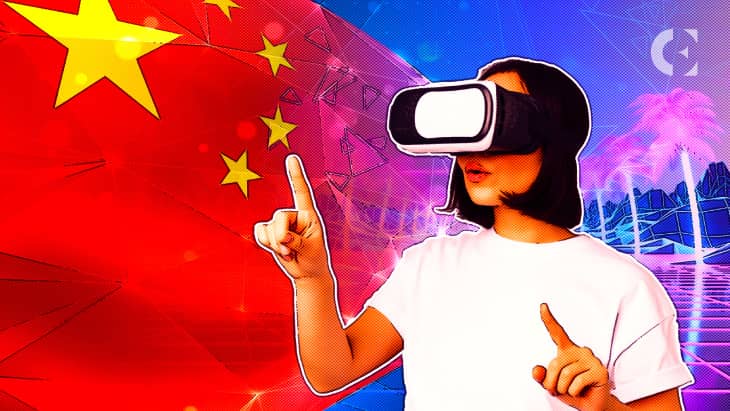 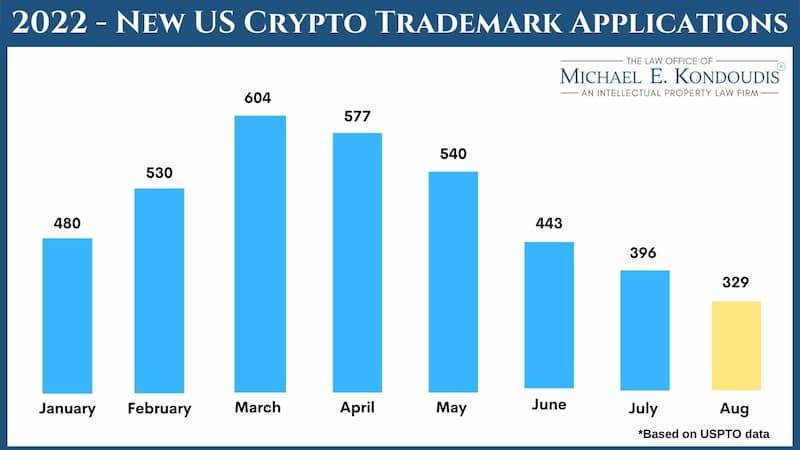 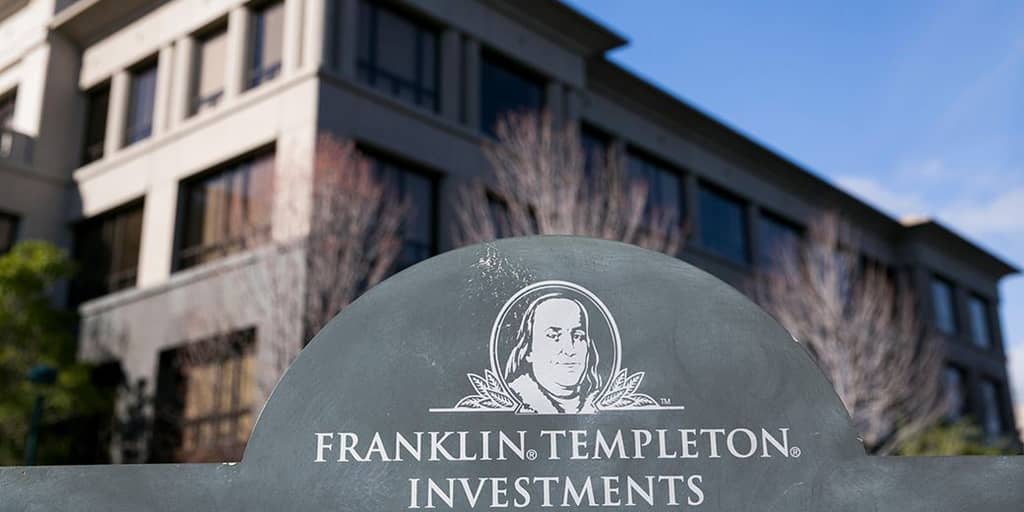 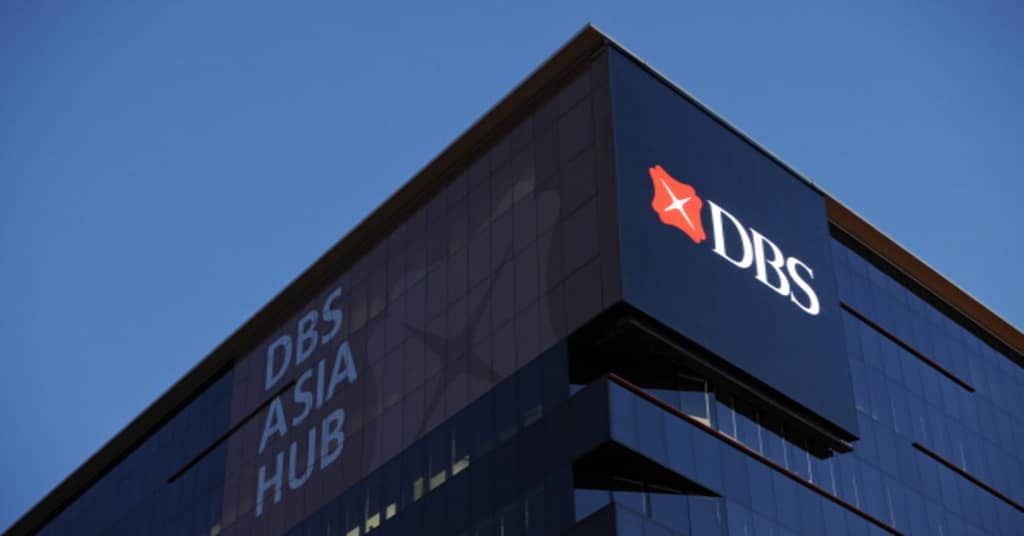 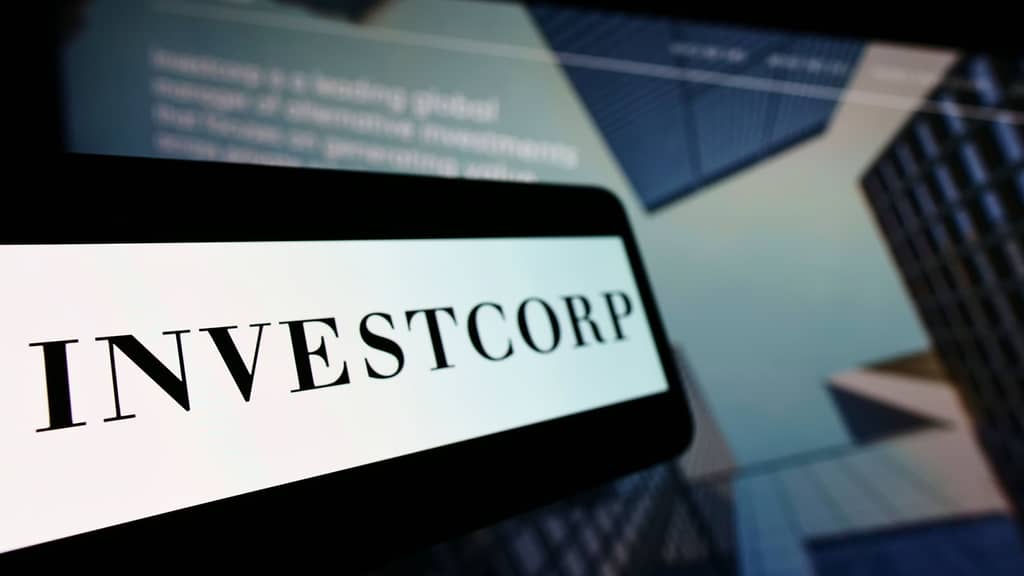 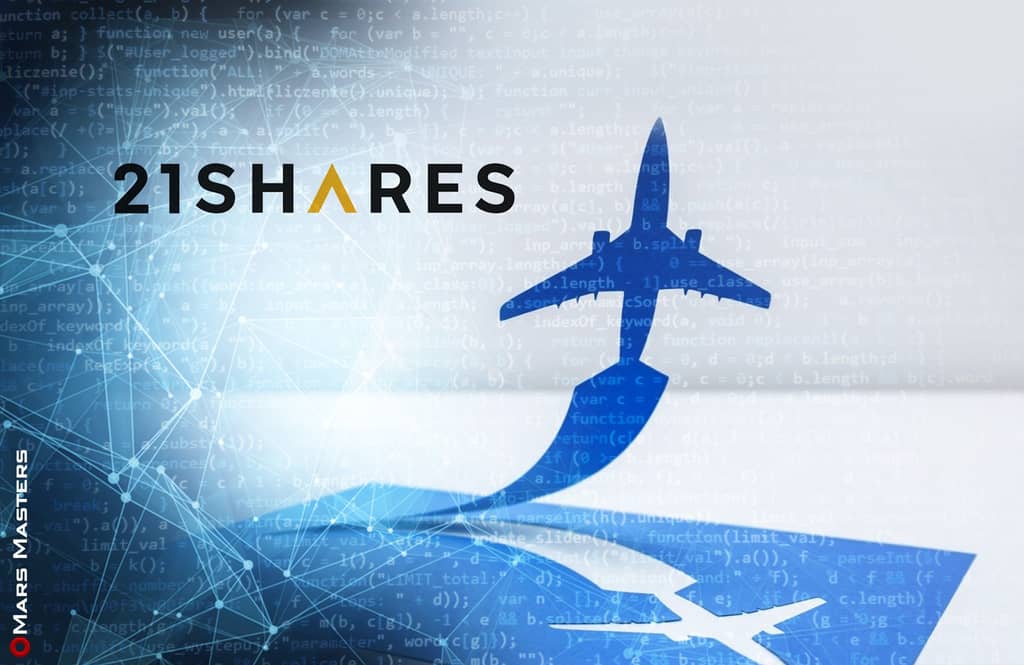 21Shares’ Parent Company Valued at $2B After Marshall Wace-led Fundraise 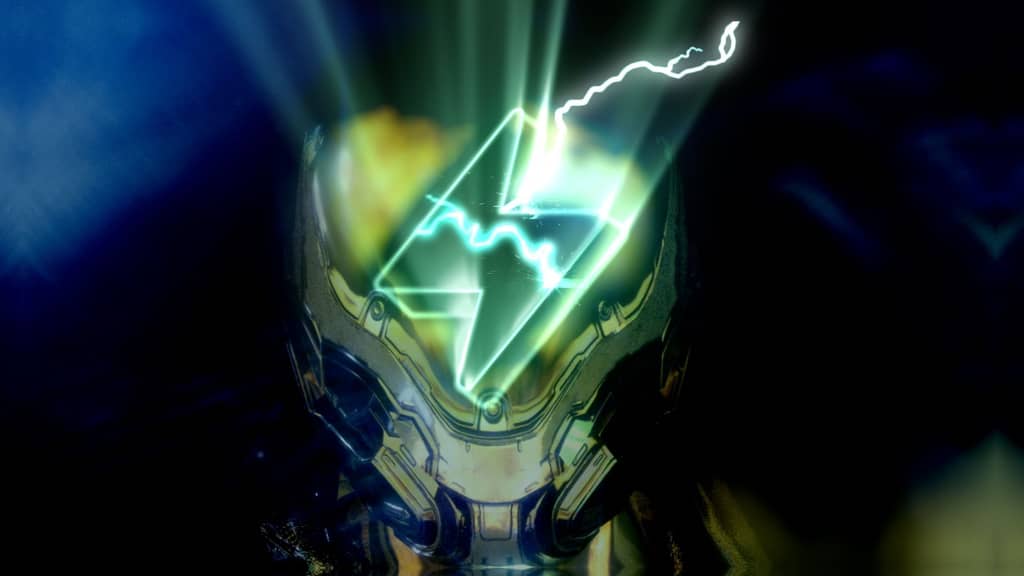 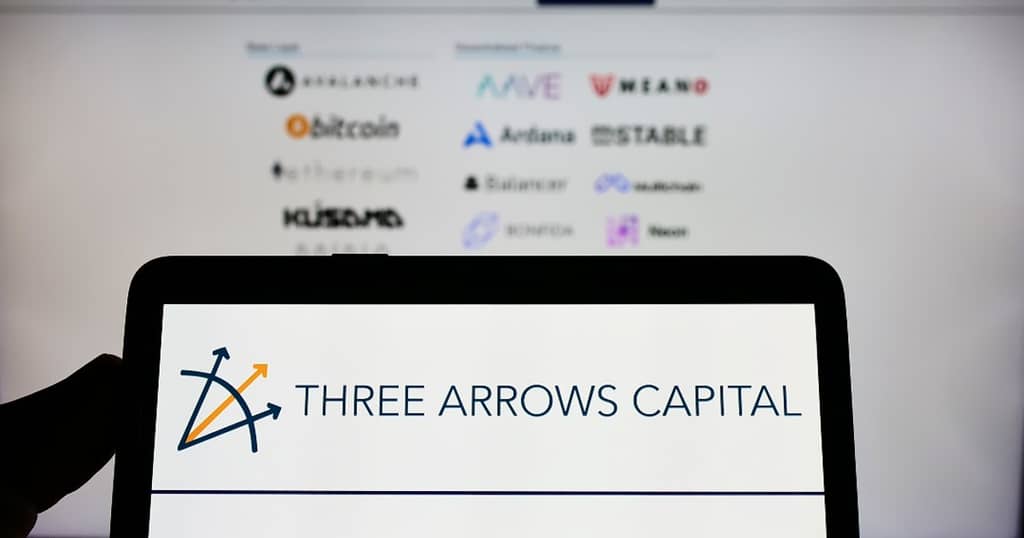 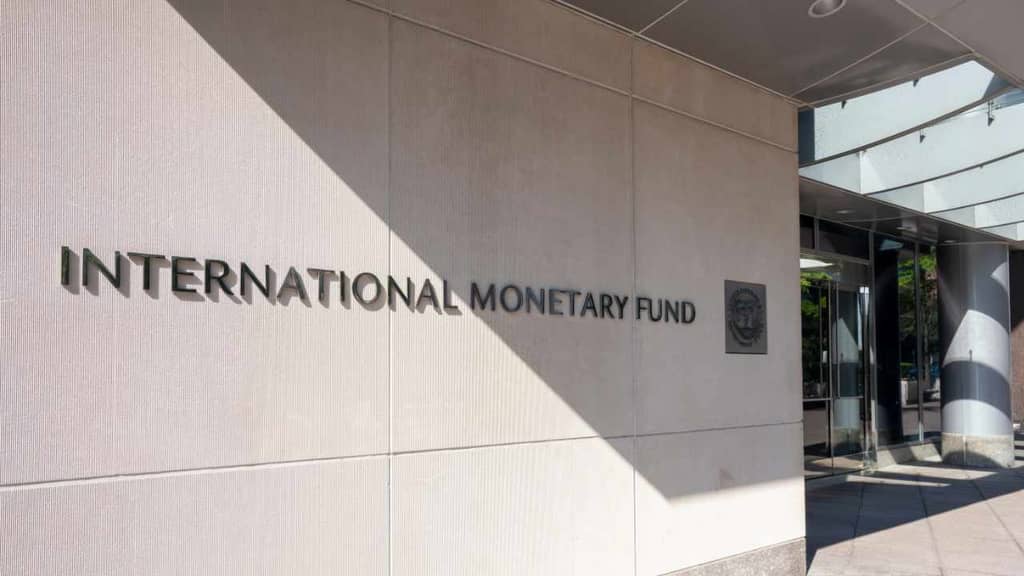 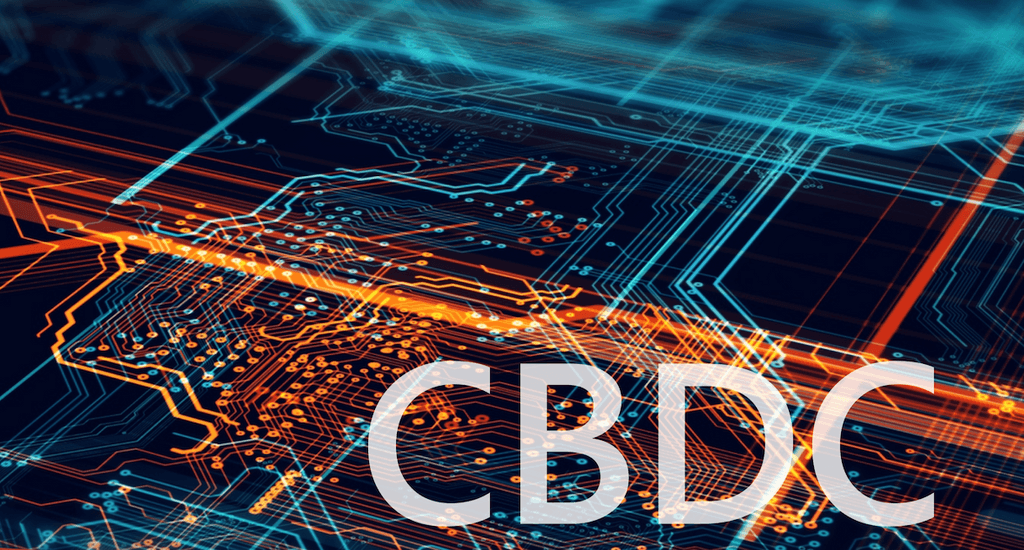