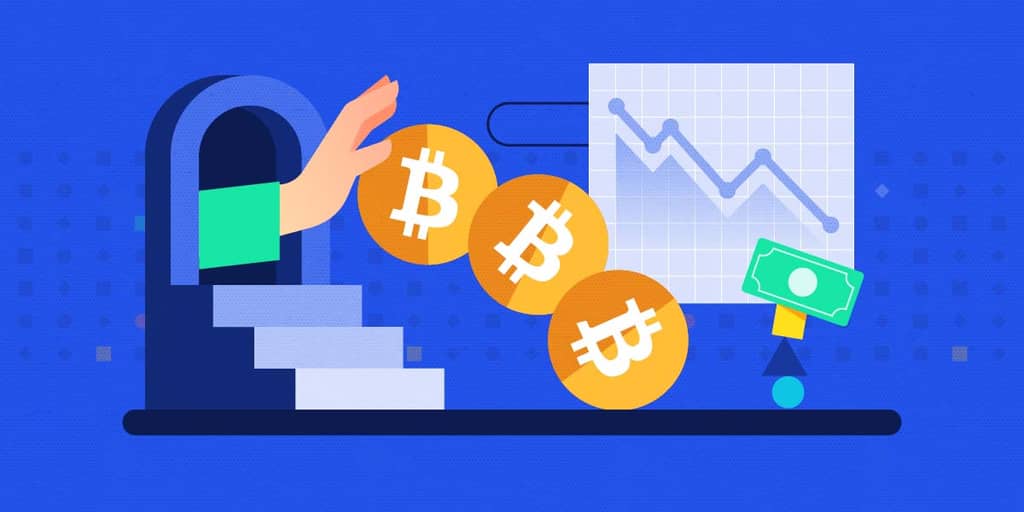 [TL; DR]
🔷 The collapse of TerraUSD (UST) and the subsequent withdrawals of BTC increased its selling pressure in Q2-2022.

🔷 After the collapse of UST the market lost confidence in cryptocurrencies resulting in massive withdrawals of BTC.

🔷 Many bitcoin mining companies withdrew their holdings due to the constant decrease in BTC price.

🔷 Analysts predict that the value of BTC will rise again once the market regains confidence.


There are various speculations why the 2022 crypto winter season has become extremely bearish. Clearly, there are many factors that contributed to this bear run, probably the worst in the history of cryptocurrencies and other digital assets. Of course, the collapse of the Terra blockchain’s native token Luna and the UST stablecoin greatly contributed to the current bearish momentum. However, analysts believe that there is much more to this. And Arcane Research identified one of the major contributing factors to the worst winter seasons of all times. Accordingly, the massive institutional withdrawal of bitcoin worsened the conditions of the bear market.


The extent of institutional withdrawal of bitcoin in quarter 2- 2022

As we said, Arcane Research revealed that several institutional investors have withdrawn large sums of bitcoin since May 2022, immediately after the start of the Terra Blockchain troubles. In fact, Arcane Research said that institutional investors have withdrawn 236,237 BTC since 10 May 2022. This amount is accumulated5 of the normal hedging and capitulation activities that usually occur during bear markets. Since then, the valuation and price of BTC and other cryptocurrencies keep on gradually declining over time.

These institutional investors are selling bitcoin in large amounts showing the decreasing confidence in cryptocurrencies. Currently, the total crypto market capitalization is below $1 trillion, falling from $2.2 trillion it reached earlier this year. The truth still remains that this trail of withdrawals started with the fall of TerraUSD and the crumbling of LUNA a few days after Terraform Labs reached its $3 billion bitcoin reserve level. Within a short time, the once $15 billion TerraUSD (UST) depegged, its price spiralled down close to $0.00 before its eventual demise. Unfortunately, the contagion effect spread across the crypto space, creating panic in the process. As a result, both individual and institutional investors started disposing of their bitcoin holdings.

The Luna Foundation Guard (LFG) was one of the first key organizations to sell its bitcoin. It sold 80,081 BTC in its attempt to prevent the collapse of its TerraUSD (UST) in May. The chart below shows how LFG accumulated BTC over the months before it sold it. 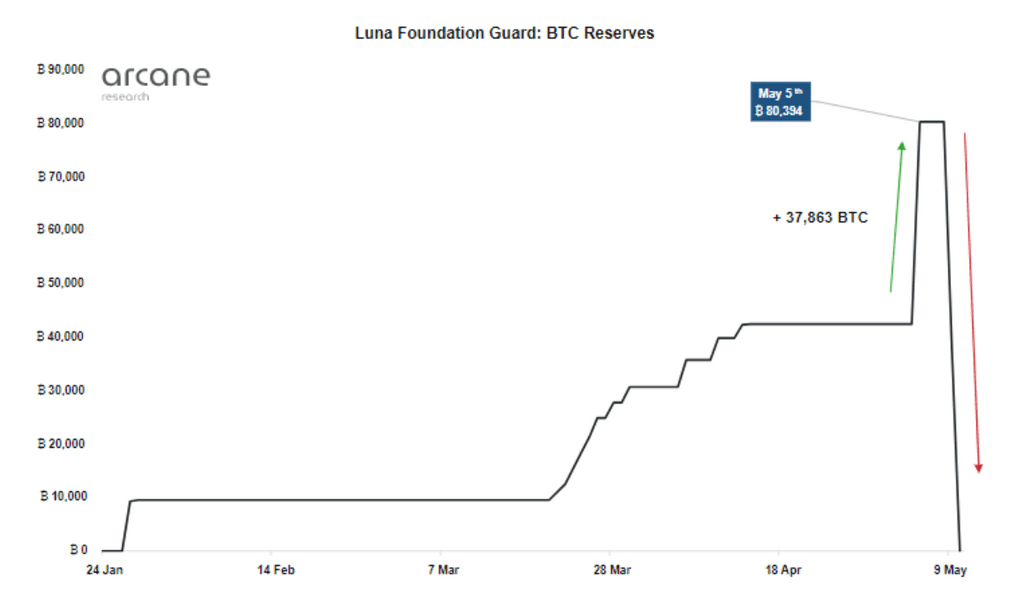 In the end, LFG sold its BTC reserves on 9 May. In response, many miners started to sell their bitcoin. According to Lunde, the miners sold 19,056 BTC in May and June 2022. The reason for the miners to sell their BTC was the constant decreasing of the price of BTC leading to less profit. Although in January, most bitcoin mining companies would sell around 30% of their production, the situation was different in the second quarter. These companies increased their sales rate to about 400% of their production. This means that most of the miners were selling more than their monthly production, thus withdrawing from their reserves. 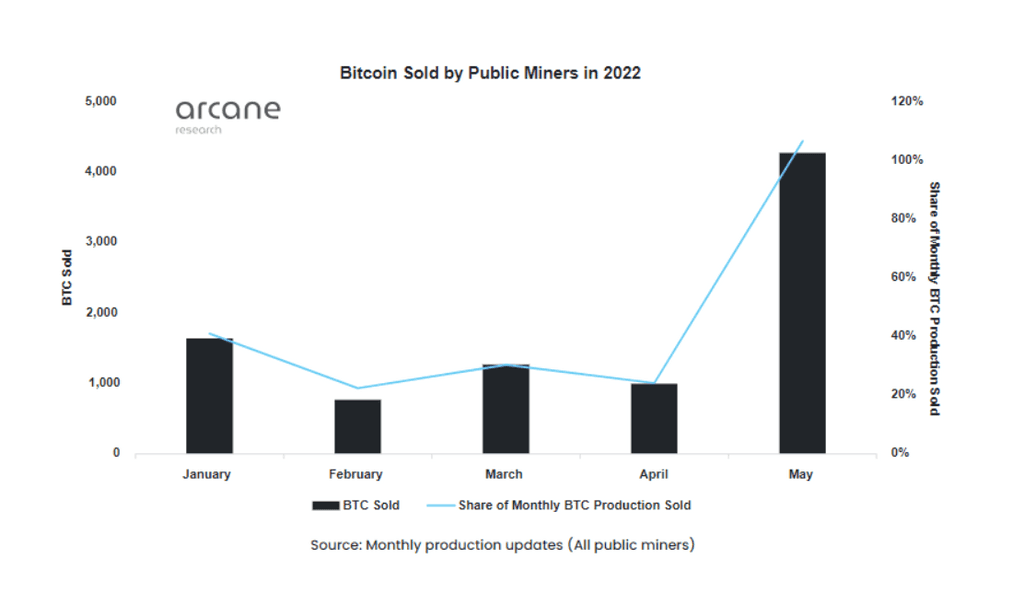 Source: Arcane
The graph summarizes the activities of bitcoin miners between January and May 2022. What is most significant is the increase in miners’ bitcoin sales in May.


Tesla and other institutional investors

At the time when the miners reached their peak sale, Tesla, the electric car manufacturer, sold 29,060 BTC. Through Elon Musk, its founder, Tesla said it sold the BTC in order to boost its liquidity in view of the effects of Covid-19 lockdowns in China. Nevertheless, Tesla still holds approximately 9 686 BTC. Other organizations also disposed of their BTC holdings. For example, Purpose ETF sold 24 510 BTC; GBTC holdings, which is related to 3AC sold 22, 054 BTC while Celsius sold 21 962 WBTC. 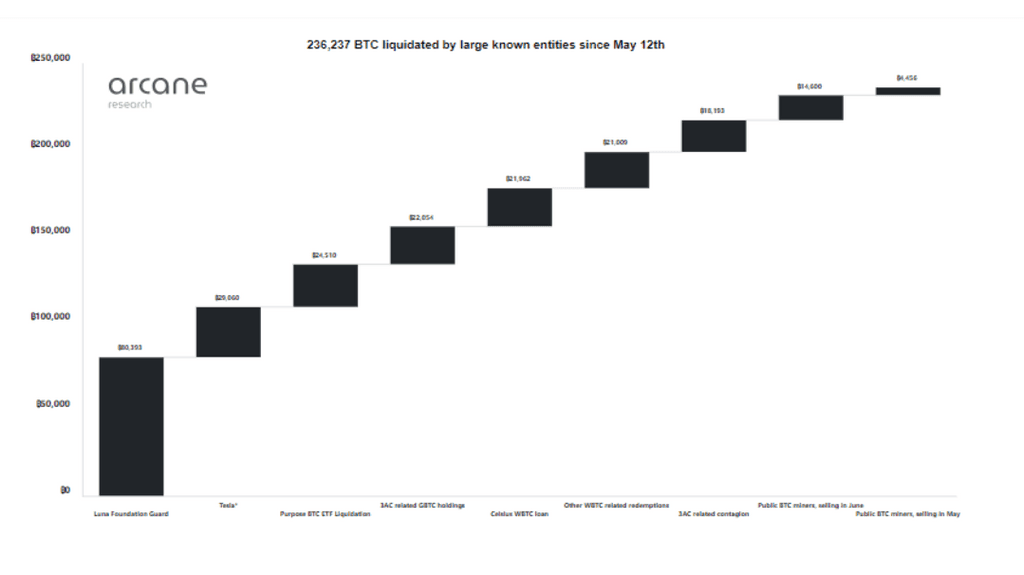 Source: Arcane
The graph shows the institutions that withdrew their BTC from May 12, 2022.


Celsius on a Restructuring Drive

As we said, Celsius is one of the institutional investors that sold its bitcoin holdings to pay back its DeFi loans in preparation for restructuring. Already, it has initiated a voluntary Chapter 11 bankruptcy procedure which, if granted, allows it to operate while meeting its financial obligations to creditors and employees. Its motive to restructure is the reason behind selling 21 962 BTC. Apart from the WBTC, Celsius had stETH as part of its crypto holding. The following graph shows the WBTC transaction carried out between 21 and 22, July. 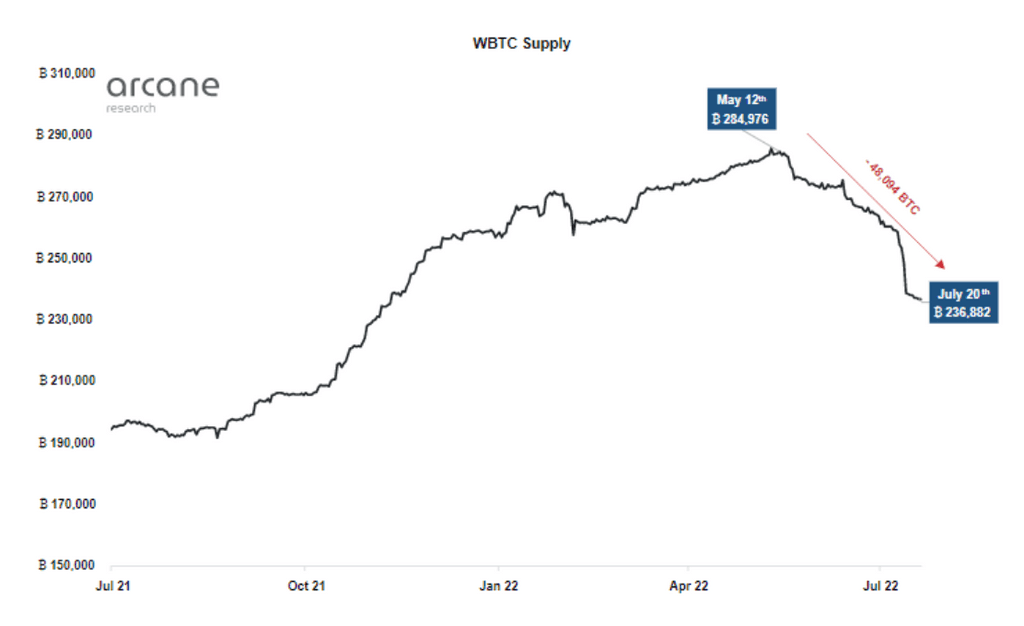 Source: Arcane
Currently, Celsius is waiting for the outcome of its Chapter 11 Bankruptcy proceedings.


The state of the bitcoin market

In spite of the high selling pressure emanating from institutional investors the bitcoin market remains vibrant. Notably, the trading volume remained constantly high through the second quarter, even higher than that of 2017’s bull market. According to CoinGecko, for the greater part of July 2022 the daily bitcoin trading volume was above $20 billion. Yongjin Kim, the CEO of Presto Labs, a Singapore-based market maker, believes that the price of BTC will surpass $30 000 in the next few months. He said, “I think the retail sentiment is completely broken, so it will take some time before we restore confidence in the market. But there will be some reversal by the end of this year counteracting the liquidations.” Therefore, the negative events of Q2-2022 destroyed the market’s confidence in the crypto sector. But the good thing is that the market is still resilient.

The Arcane Research report indicates that several institutional bitcoin investors sold their holdings in the second quarter leading to high selling pressure which most likely contributed to the fall of the BTC price. The examples of such institutional investors are Tesla, Celsius and Luna Foundation Guard. Some bitcoin mining companies also sold large sums of BTC as a result of the constantly falling prices.

However, analysts believe that the main trigger of these market sales was the collapse of TerraUSD. Also, in spite of such high selling pressure, the bitcoin market remained strong with the anticipation that the price will rebound above the $30 000 resistance level within the next few months. What is important now is for the market to regain confidence.