As the Bitcoin and general crypto slump drags on, corporations globally have seen their stocks begin to mirror the devaluation of the world's largest cryptocurrency. Microstrategy is in the unfortunate position of spearheading the decline as the business intelligence firm holds record quantities of BTC.


Alongside BTC-holding companies Marathon, Riot, and Coinbase, Microstrategy's crypto-exposed securities are plunging to lower levels as the digital token threatens to drop beneath the $21,000 mark. At the start of the week, the firm's stocks entered a nose-dive and closed the day with a 25% loss charting a multi-year low.


Microstrategy Bitcoin ties are no secret in the crypto community; thus, the unfolding events have caught the attention of many. We'll be examining the company's response as well as what lies ahead for Microstrategy amidst the unstable market conditions. However, before doing this, let's retrace the company's crypto-centric steps from the past few years.


The Virginia-based business intelligence enterprise began its Bitcoin journey in August 2020. The company shared news of its first Bitcoin purchase, 21,454 tokens worth roughly 250 million at the time. Microstrategy dubbed its crypto venture a "capital allocation strategy", and with CEO Michael Saylor at the helm of their moves, all seemed well.


The company assured stockholders that their crypto holdings not only made for a profitable deal but served as a hedge against inflation.


Since then, Microstrategy has invested nearly 5 billion USD in the Bitcoin market, making it the largest corporate holder globally. The company's most recent quarterly report revealed that they have amassed up to 129,218 units of the digital currency, spending an average of $30,700 on each token.

Bitcoin Losses May Push Microstrategy to a Margin Call


The past six months have been tough on crypto investors, and the losses just keep piling up. Microstrategy's massive Bitcoin position means it's leading the charge as the token's price continues to slide. On paper, the company's holdings are down $1B from the original investment.


As mentioned above, the decline has extended to Microstrategy's stocks. Early last year, MSTR scaled $1000, hitting a record high; however, fast forward a year and a half, and 85% of that value has gone down the drain. Just before noon on Monday, Microstrategy stocks slid 20% to fall beneath $150 for the first time in the two years they've held BTC.

The drop is doubly significant held against one of Microstrategy's most recent moves. In March, the firm took out a $205 million loan from crypto-centric bank Silvergate. The business intelligence company put up its BTC holdings as collateral and used the funding to buy more Bitcoin for its portfolio.


Microstrategy has built up nearly $2B in debt, growing its BTC holdings, and the March loan caused speculations about a margin call. A margin call is an event where an investor is required to deposit more funds to cover likely losses on an investment made with borrowed resources.


In a quarterly earnings call in May, Microstrategy CTO Phong Lee spoke about the possibility of a margin call. According to Lee, the company borrowed the funds at a 25%-to-loan value, and a margin call took place at a 50%-to-loan value. This means that if the BTC price is cut in two, this will set a margin call in motion. The loan-to-value ratio denotes the risk associated with the loan; it weighs the funds provided against the asset's worth.


This makes $21,000 a crucial price level for Microstrategy, as the average price entered for the loan was $42k. Coingecko charts show BTC trading at $21,257 at writing, dangerously close to the half-mark. The token briefly dipped under $21k for a 52-week low on Tuesday morning, after which it bounced back to $22,000. 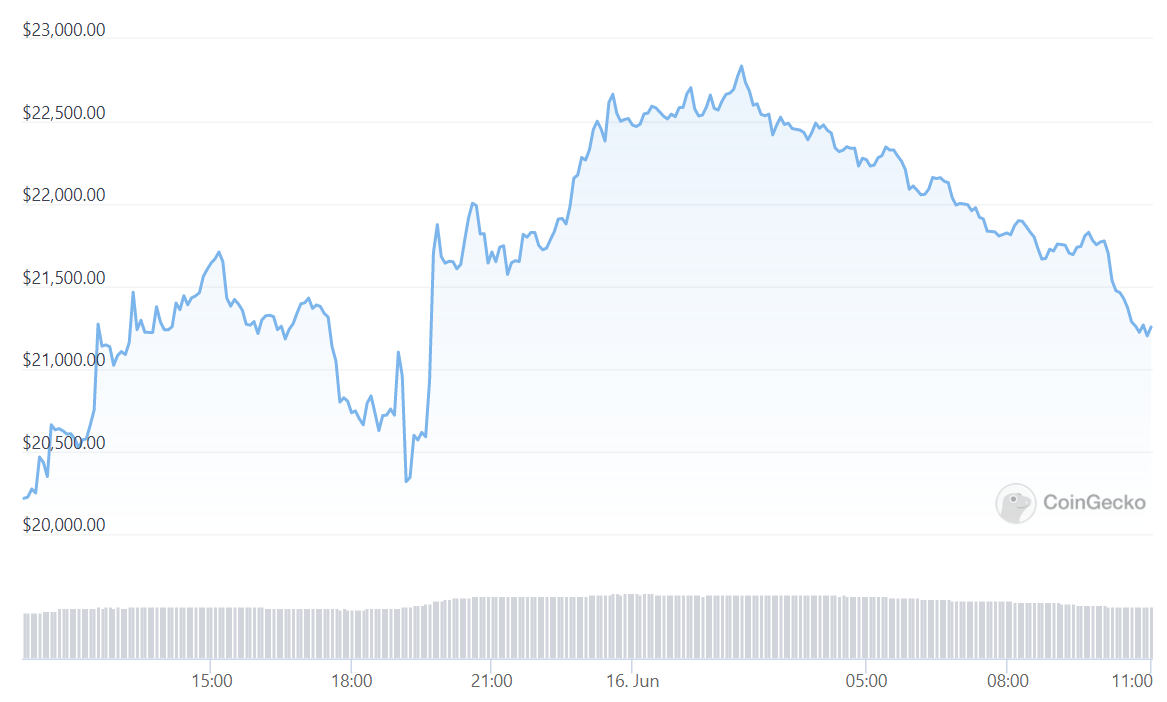 
Despite the tense market waters, Microstrategy founder and CEO Michael Saylor remain optimistic about his company's bullish relationship with BTC. Saylor stated that he and the firm were prepared to face whatever the market threw at them. Notably, these reportedly aren't empty words.


Saylor posted a Tweet a few days ago explaining that Microstrategy had factored in an unstable market when it started building its BTC stockpile. The company's balance sheet is designed to help it "#HODL through adversity." 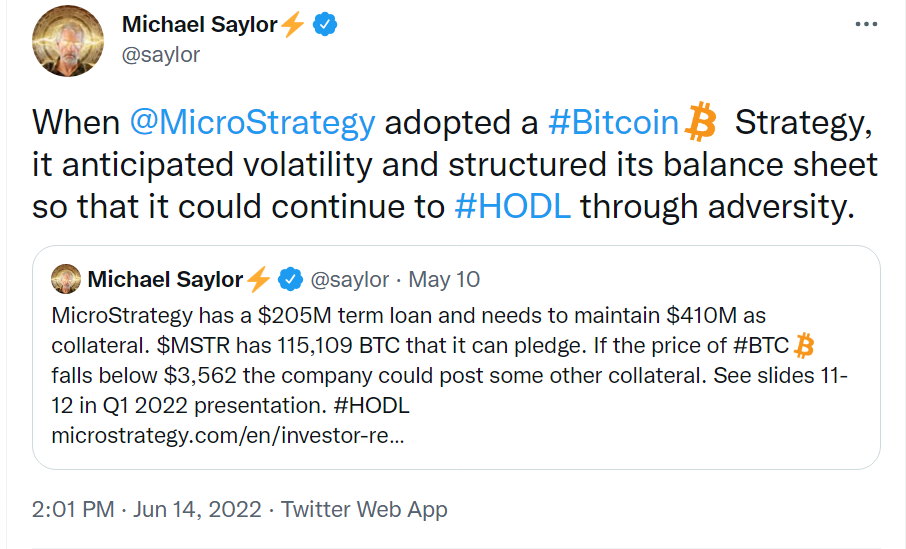 
The loan collateral requirements for the Silvergate funding total $410 million. Of course, this will only be enforced in the event that BTC falls under $21k and Microstrategy receives a margin call. The company has denied receiving one so far, and CEO Saylor claims if a margin call does come, they have enough to cover it.


Microstrategy's BTC holdings are reportedly sufficient to cover the collateral costs unless BTC plunges all the way to 3500 USD. Saylor confirmed this at the start of the month; he even went as far as saying if BTC did slip further, his firm could come up with some other collateral.


Michael Saylor is confident in both Microstrategy's ability to hold out and BTC's recovery. In a recent interview with Yahoo Finance, he shared his expectation that Bitcoin's value will soar into the millions not far from now.


If BTC continues to fall, there are two likely options for Microstrategy. We've gone over the first above; the firm will have to funnel out additional collateral, which they say they can handle. The other potential scenario is that Microstrategy will have to let go of a massive portion of its Bitcoin position at a loss.


With the company sitting on nearly a hundred and fifty thousand Bitcoin units, this could be disastrous for the crypto market. Large quantities of BTC entering what is already a bear market won't just send the token on a nose-dive; the industry will witness other digital currencies mirror the decline.


Hopefully, Saylor and Microstrategy do, in fact, have a contingency plan, and this scene never has to play out. Their confidence seems to have reassured investors as MSTR recovered by 3% yesterday despite tanking previously.

*Gate.io reserves all rights to this article. Reposting of the article will be permitted, provided Gate.io is referenced. In all other cases, legal action will be taken due to copyright infringement.