Gate.io Blog SpaceX is About to accept DOGE payments for merch
Hotspot

SpaceX is About to accept DOGE payments for merch

A few days ago, Tesla CEO Elon Musk announced that the automobile manufacturer now lists Dogecoin as a payment method for its merchandise. Musk also revealed that his aerospace transportation company, SpaceX, is set to follow in Tesla's footsteps.

The billionaire shared the news via a post on Twitter that swiftly blew up across tech and crypto circles on the social media platform. The effect was not limited to this space, as the pertinent meme coin also saw a spike in price soon after. Musk's tweet only contained a single sentence, but this was enough to shake up the market despite the ongoing slump.

This is not entirely surprising, considering that it's excellent news not just for Tesla and SpaceX but also for the DOGE community. Additionally, the billionaire CEO has been a longtime supporter of Dogecoin. Though he has faced much criticism for it, he holds much sway with the meme coin and general crypto industry.
Keywords: SpaceX, Tesla, Musk, DOGE, Dogecoin

About two weeks into the year, Musk's electric car company opened the door for buyers to purchase merchandise with Dogecoin. Much like the latest, the CEO's announcement tweet was short and straight to the point. "Tesla merch buyable with dogecoin", it read.

This came as a follow-up to an announcement from December last year. Then, Musk had said Tesla would accept DOGE payments for certain items as a sort of test run. It appears the move was successful; the meme coin remains the only cryptocurrency the car company accepts. The merch shop even contains a warning stating that they will not return payments in other virtual assets.

Additionally, the Tesla website lists a few items buyers have to pay for exclusively in Dogecoin. Some of those are a Giga Texas Belt Buckle priced at 835 DOGE, a Cyberwhistle for 300 DOGE and a Cyber Truck Graffiti Cuffed Beanie set at 205 tokens, among other items.

Buyers looking for information regarding merch purchases can find further details on the Tesla website. The car company's DOGE wallet address is displayed in alphanumeric code for customers purchasing merch. Another option is to scan a QR code which conveys the customer directly to their Dogecoin wallet. After this, they can transfer the correct quantity of the meme token and complete the purchase.


SpaceX Next in Line

Although Elon is yet to provide a specific date for the integration, SpaceX is on track to follow its predecessor's examples. As stated earlier, the announcement caught the attention of several Twitter users. Arriving much to the pleasure of members of the DOGE community, it triggered a wave of questions about car buyers using the meme token.

Another idea that made the round considered whether users could top up or pay for Starlink sub_script_ions using DOGE. Starlink is a network of satellites which parent company SpaceX says provides various remote and rural regions worldwide with "high speed, low-latency broadband internet." Musk was a little vague to the question of DOGE payments for Starlink, responding with a tentative "maybe one day."

The news went public close to midday on Friday 27th of May. CoinGeck0 charts show that a few minutes before, Dogecoin had rested at around $0.078. However, less than an hour after the tweet went live; the meme token had recorded an 8% leap in price. It traded briefly at $0.084 before dropping back to $0.080; however, over the past few days, it has climbed steadily to hover at $0.085 at writing time. 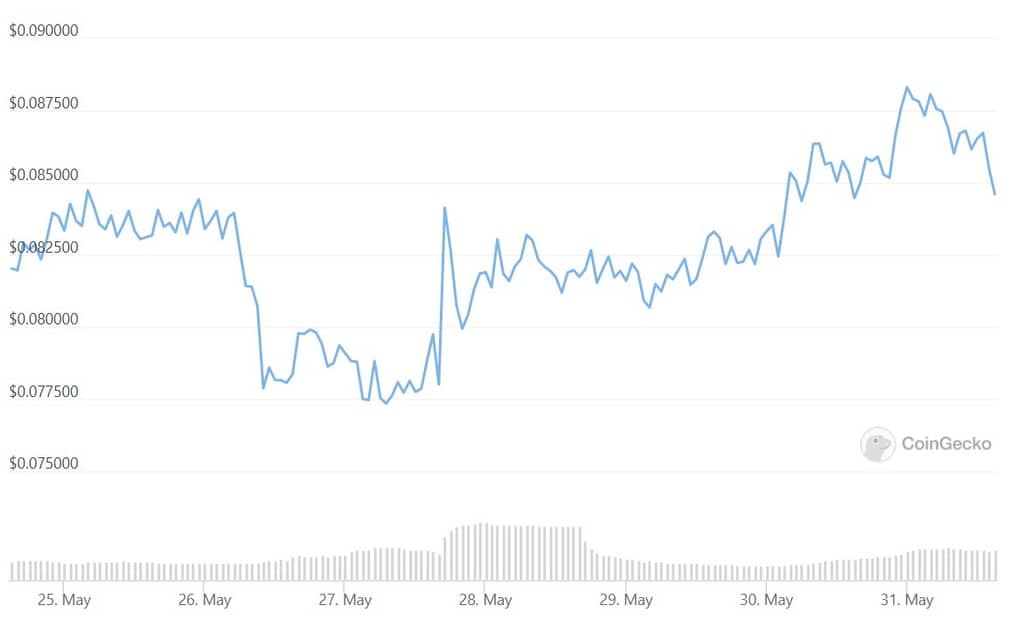 Notably, before the tweet, DOGE had been down by about 4%, an impressive rebound for the meme coin considering the bearish state of the general crypto market. Similar price action could be seen when Musk shared the news about Tesla at the start of this year; this is not a new phenomenon. Instead, it is yet another pointer toward the SpaceX CEO's influence in the DOGE and crypto community.

Musk's favourable sentiment regarding the meme token is far from a secret in the crypto space as he is vocal about his support for Dogecoin, particularly on Twitter. In the past, he revealed that his crypto holdings comprise BTC, ETH and DOGE. While SpaceX only holds Bitcoin, Musk has shared that he sees Dogecoin's potential as a currency, but the world's largest cryptocurrency works well as a store of value.

After revealing Tesla's huge Bitcoin purchase early last year, he made a series of tweets that saw the dogecoin clock a swift rise in price. Due to events such as these, crypto users have dubbed Elon the “DogeFather”.

The year started pretty well for the meme token. 2021's bullish run saw it shoot up to a position as one of the world's top 3 cryptocurrencies by market capitalization. Dogecoin hasn't recorded such highs since then, but it charted quite well in April, rising to 0.17 USD in the first week of the month.

However, things took a sharp turn as events in May caused it to drop by over 60%. DOGE dipped to 7 cents before Musk's tweets swept it back up once more. The token appears to be on the road to recovery, and some believe the Tesla boss' support is the answer.

Author: Gate.io Observer: M. Olatunji
Disclaimer:
*This article represents only the views of the observers and does not constitute any investment suggestions.
*Gate.io reserves all rights to this article. Reposting of the article will be permitted provided Gate.io is referenced. In all other cases, legal action will be taken due to copyright infringement.

BTC + 2.23%
ETH + 1.01%
GT + 0.05%
Share with：
Follow us：
Trending
Crypto market will be in upheaval in September. How will investors survive?
Bet On 1 USD‘s Future with Burning -- What Is the LUNC Tax Burning Proposal
What Is the Future of Ethereum in Post-Merge Era
High Possibility of a 75 Point Rise in Federal Fund Rate in September
Daily Flash | Global FX markets are tanking as inflation spreads through the world, and what’s happening with Ethereum Shanghai upgrade?
Claim 20 Point now
Exclusively for Newcomers: complete 2 steps to claim Point immediately!