Can A Hard Fork Revive the Collapsed LUNA?

1. On May 17, Do Kwon, founder of Terra, announced the "Terra Reconstruction Plan V2", which plans to make a hard fork of the Terra blockchain and build an ecosystem that does not include the UST stablecoin project.

2. On May 18, Terra Builder Alliance submitted a governance proposal #1623. If the proposal is approved, the hard fork of the Terra blockchain will be carried out on May 27. Up till now, on online voting, the proposal has won 80.25% support.

4. Even though the "Terra Reconstruction Plan V2" has initiated dispute from people of various circles, it has also given a ray of hope to major projects under the Terra ecosystem.


On May 17, Do Kwon, founder of Terra, announced the "Terra Reconstruction Plan V2", which plans to make a hard fork of Terra blockchain and build an ecosystem that does not include UST stablecoin project. The existing Terra blockchain and Luna token will be renamed Terra Classic and Luna Classic (LUNC), and the newly forked blockchain will use Terra and LUNA as signals instead.

Previously, on May 14, Do Kwon and others had put forward a proposal to fork out the Terra blockchain and redistribute LUNA tokens, which triggered extensive discussion in the Terra community and the entire crypto community. Supporters of the proposal believe that the fork proposal is expected to rebuild Terra's ecosystem on the verge of collapse in the crisis and compensate LUNA and UST holders who have suffered serious losses before, while opponents of the proposal believe that the fork is meaningless to save LUNA, and the new chain will be a worthless.

The proposed reconstruction plan V2 has made some adjustments on issues such as token allocation compared with V1. Specifically, the new Terra blockchain will maintain network security by issuing additional LUNA tokens, with a staking return of 7% per year. LUNA tokens on the new chain will be airdropped to previous holders of Luna Classic, holders of UST and important developers of Terra Classic blockchain. Specifically, the supply limit of LUNA is 1 billion. 30% of the newly issued LUNA will be reserved for the community, of which 10% will be allocated to developers, and the remaining 70% will be airdropped toLUNC and UST holders according to the number of tokens held. The wallet address of Terra blockchain's official Terraform Labs is not listed in the airdrop list, so the new Terra blockchain will become a blockchain completely owned by the community. In addition, this also means that the Terra project team decides to abandon the stablecoin project UST in order to preserve the whole ecosystem of Terra blockchain as much as possible. 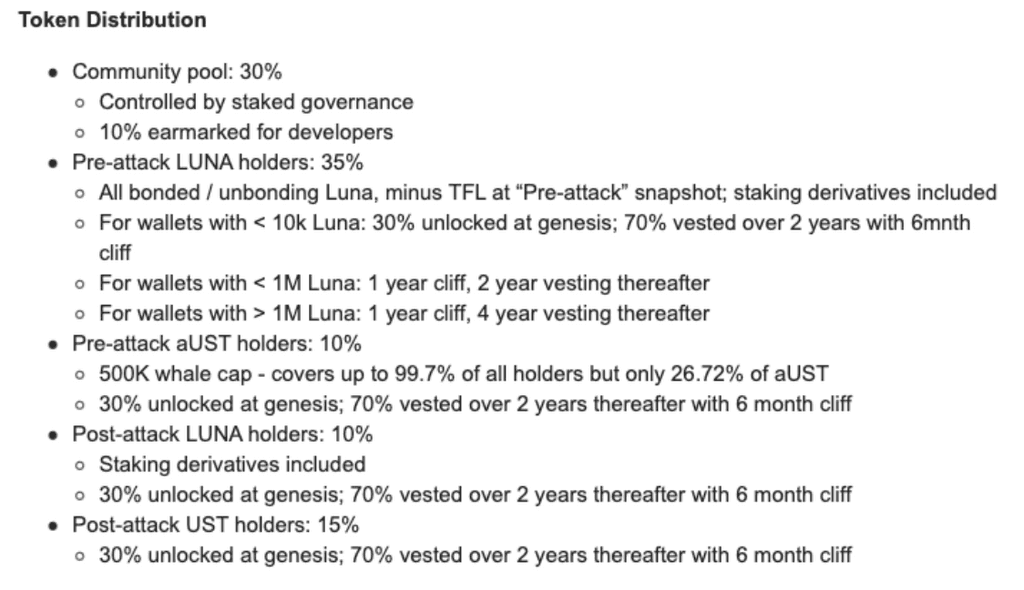 On May 18, Terra Builder Alliance submitted a governance proposal #1623 and voted on whether to approve the aforementioned "Reconstruction Plan V2". If the proposal is approved, the hard fork of the Terra blockchain will be carried out on May 27. According to a previous vote launched by the Terra community on the 17th, 91% of the 7082 votes cast by community members as of the 20th did not support Do Kwon's "Reconstruction Plan V2". Some Terra community members believe that the fork proposal will only benefit the blue whale, whereas LUNA smallholders will be forced to be on their own.

However, the voting results of the community are very different from the on-chain voting results of the governance proposal #1623, because only an account needs to be registered in the Terra forum to participate in this voting, rather than necessarily holding LUNA tokens. Currently, the Terra#1623 proposal has received 80.25% support, and the amount of LUNA tokens selected to support far exceeds the approving threshold of the proposal. 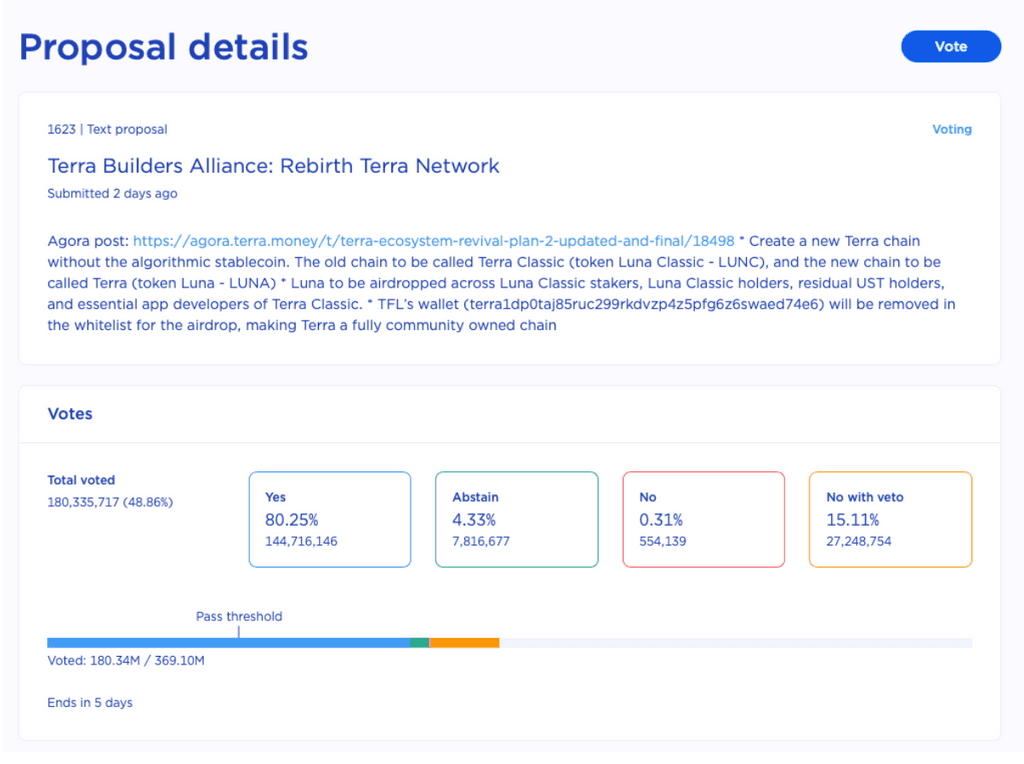 As we know, Terra is a Layer 1 public chain founded in 2018 and belongs to the Cosmos. LUNA is the native token, governance token and PoS staking token on the Terra blockchain. So far, Terra's ecosystem has included more than 100 projects involving multiple formats such as DeFi, GameFi and NFT. The most important ecosystem project on Terra is the algorithmic stablecoin project UST that triggered this crisis. UST is also the most important stablecoin to be used under Terra ecosystem. There is a deep binding relationship between LUNA and UST. The anchoring relationship between UST and US dollar is realized through the arbitrage behavior of LUNA holders. Users can exchange LUNA with a value of $1 in Terra's official use for one UST at any time, or use one UST for one LUNA with a value of $1. Therefore, the Terra ecosystem, UST performance and LUNA price rarely stand or fall alone.

Since the 10th, the total circulation of LUNA has surged from approximately 350 million to 6.5 trillion. In this crisis, it was precisely because UST was decoupled from the US dollar that the holders hurriedly withdrew the liquidity of USTs and converted them into LUNAs, which led to a surge in the total circulation of LUNA, and then made the price of LUNA close to zero due to the continued selling. Therefore, before UST price returns to anchor price, LUNA price is unlikely to rebound substantially. This is why Do Know and others chose to give up on the stablecoin project UST directly and restart Terra ecosystem directly through a hard fork. In this "Terra Reconstruction Plan V2", Do Kwon put forward the slogan of "Terra is more than $UST". 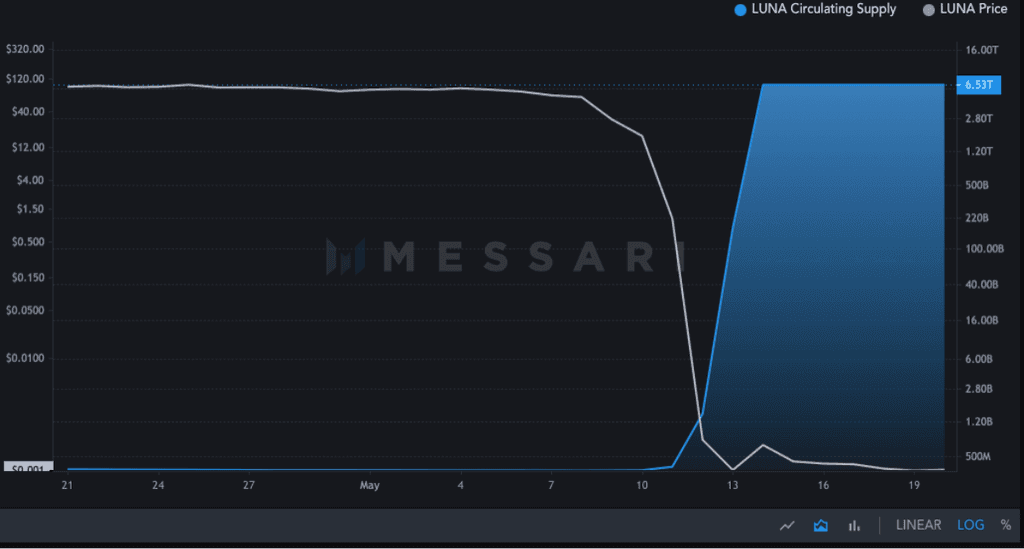 After the outbreak of the crisis, not only the LUNA token price was close to zero, but Terra ecosystem TVL fell from approximately $30 billion at its peak to only approximately $155 million today, according to DeFiLiama. The major projects represented by Anchor are also seriously frustrated and are eager to find a way to break the situation. Juno, the public chain that belongs to the Cosmos ecosystem structure with Terra, handed out olive branches to these projects and proposed to allocate one million JUNOS as the funding for the relocation of Terra projects. Polygon also proposed a plan to help the relocation of Terra ecosystem projects. Some projects, such as Terra Land, chose to migrate to Ethereum and re-issue the project token.

Now, although the implementation of “Terra Reconstruction Plan V2” has been controversial by all parties, it has also given a first-line turnaround to major projects under the Terra ecosystem. So, can the newly established Terra ecosystem work well without UST as a value medium? Can the once collapsed community consensus be gradually repaired? Can LUNA price, an important indicator indicating Terra's heavy ecosystem burden, return to the high point? Maybe only time can give us the answer.


Author: Gate.io Researcher: Ashley H. Translator: Joy Z.
* This article represents only the views of the researcher and does not constitute any investment advice.
*Gate.io reserves all rights to this article. Reposting the article will be permitted provided Gate.io is referenced. In all other cases, legal action will be taken due to copyright infringement.

Gate.io Featured Articles
The Decoupling of UST Triggered a Deluge of Regulation | What is the Future of Stablecoin?
Luna Chain Reaction Poses Significant Capital Loss, and the Security of DeFi Financial Products Initiates Dispute
Luna Fell by More than 95% in a Single Day. What Is the "Death Spiral" Leading to Hell?