Gate.io Blog The Founder of Azuki Reveals His Rug-Pull Experience, Resulting in the Floor Price of Azuki Halved
Hotspot

The Founder of Azuki Reveals His Rug-Pull Experience, Resulting in the Floor Price of Azuki Halved

1. On May 10, Zagabond, founder of Azuki, published an article detailing his entrepreneurial experience, which triggered unrest in the Azuki community and caused a halved floor price.

2. In the article, Zagabond said he was involved in three projects: CryptoPhunks, Tendies and CryptoZunks, which are considered rug-pull schemes.

3. It is rumored that Zagabond revealed himself because another project team plans to expose the failed projects of the Azuki team.

4. Presently, Zagabond has said that he will return all the proceeds of CryptoPhunks, Tendies and CryptoZunks.


On May 10, Zagabond, founder of the famous avatar NFT series Azuki, published an article entitled "the journey of a creator" on Mirror, introducing how he was attracted to join the NFT field by NBA Top Shot, how he finally founded Azuki as a crypto novice, made the project a great success, and his original intention for the development of Web 3.0 as the founder of Azuki.

However, because the article mentioned three NFT projects that Zagabond had participated in and founded before - CryptoPhunks, Tendies and CryptoZunks, which have been widely considered typical "rug-pull projects", Azuki community's trust in Zagabond began to collapse. Azuki’s floor price nearly halved in one day, falling from 20ETH to nearly 10ETH. 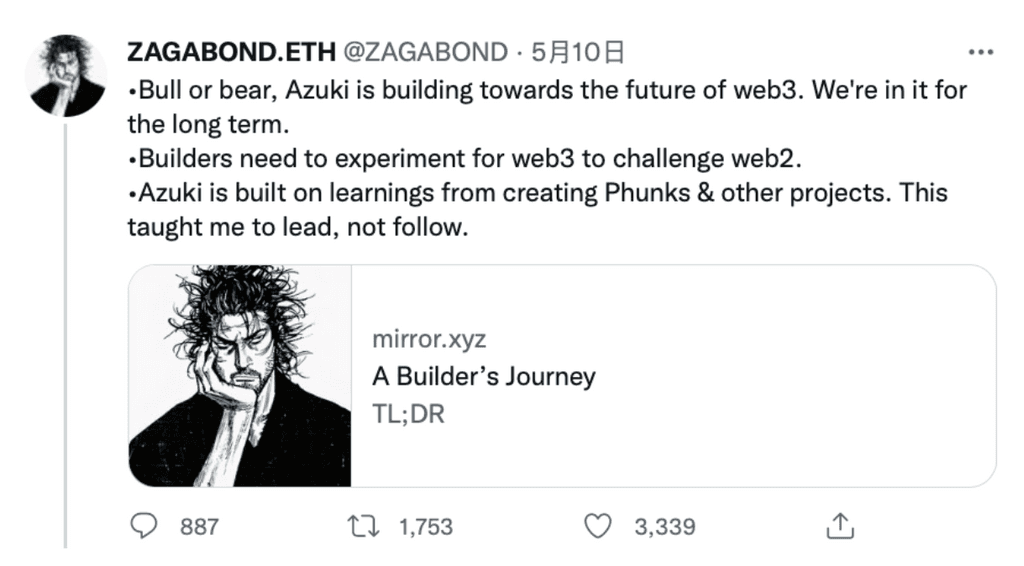 
Azuki and the Chiru Labs behind it

Azuki was created on January 12 this year and released by the start-up company Chiru Labs. The project name refers to "red bean" in Japanese. Once released, the project won a large number of fans for its unique Japanese animation style and excellent aesthetics, and was quickly considered a "blue chip project" in the field of FPF.

This success was unexpected even for several sponsors of the project. The first 8700 NFTs were sold out within three minutes of launch, with sales reaching $29 million. In terms of technology, Azuki adopts the innovative token standard of Chiru Labs - ERC721A, which can greatly reduce the gas fee required for minting and save minting time.

The four founders of Chiru Labs live in Los Angeles and are cryptocurrency enthusiasts brought together by NBA Top Shot. For privacy reasons, the four founders did not disclose their true identities. Zagabond, known as the core personnel of the event, is one of Azuki's four founders. It is reported that Zagabond was born in Asia, worked in Google for development, and then worked in a central financial platform. The second project founder, Location Tba, is a former Facebook software engineer. In addition, the third project founder, Hoshiboy, claimed to have participated in the incubator project Y Combinator twice.

In the article published on May 10 , Zagabond said that he had participated in the operation of three NFT projects: CryptoPhunks, Tendies and CryptoZunks in the past year. He said that although the follow-up development of these three projects was not satisfactory, Azuki team still benefited a lot from them, and these experiences were also applied to Azuki.

From the perspective of the Azuki community, there is no doubt that CryptoPhunks, Tendies and CryptoZunks are rug-pull schemes, while Zagabond makes no secret of his participation in the blog post and whitewash it as a necessary experience to challenge Web 3.


The subsequent impact of the event

After the release of Zagabond article, Azuki's trading volume on Opensea soared, while the floor price fell sharply, once only 9ETH. Presently, Azuki's floor price on Opensea has rebounded to 15ETH, which is still low compared with that before the incident. Zagabond's motives for posting are still puzzling. It is rumored that Zagabond had to disclose what he did because the Cool Cats team of another NFT project planned to expose what Zagabond did, so as to reduce the impact of the incident on Azuki project.


On May 12, Zagabond issued a statement again, saying that he would hand over all the income (including the sale and copyright income) of CryptoPhunks and CryptoZunks, as well as the private key of the project smart contract to the community, and would return all the sale income of Tendies to the holders. After that, he will devote himself to the Azuki project.

Rug-pull's is not only a betrayal to the community, but also to the investors. Azuki has its own development roadmap. The project will continuously find value for its holders through fashion brand cooperation, NFT airdropd, online activities and others. Consensus is the life of web 3. Azuki is undoubtedly a very successful project and should bear the responsibility of building trust in its community.


Author: Gate.io Researcher: Ashley H. Translator: Joy Z.
* This article represents only the views of the researcher and does not constitute any investment advice.
*Gate.io reserves all rights to this article. Reposting the article will be permitted provided Gate.io is referenced. In all other cases, legal action will be taken due to copyright infringement.

Gate.io Featured Articles
Luna Fell by More than 95% in a Single Day. What Is the "Death Spiral" Leading to Hell?
UST Decoupled from the US Dollar and LUNA Slumped by 60%
Big Vision of Azuki: Azuki’s Sales Volume Surpass BAYC

BTC -0.40%
ETH -0.45%
GT -1.30%
Share with：
Follow us：
Trending
Crypto market will be in upheaval in September. How will investors survive?
What Is the LUNC Tax Burning Proposal?
What Is the Future of Ethereum?
High Possibility of a 75 Point Rise in Federal Fund Rate in September
Daily Flash | Cryptocurrencies rose on US markets relief rally but Global bond yields are not looking good for the economies
Claim 20 Point now
Exclusively for Newcomers: complete 2 steps to claim Point immediately!