To give community users the best experience possible we have added the function whereby users can upload and modify their NFT images. This will add to the all-round creativity involved with OpenPunks. Creators can regularly update the appearance of the NFT images to greatly improve the artistic value and increase the overall value of the NFTs themselves. Users can participate in the image upload now, and l have the opportunity to win multiple rewards!

OpenPunks holders can click the [Image Upload] button or [Modify] button in the asset details page and enter the asset information. They can go to the modification page to upload a display of their image. OpenPunks NFTs can be updated at regular intervals. NFT. Holders can continuously polish and modify their work.. It should be noted that the same user only can only upload the same NFT image once within 24 hours. 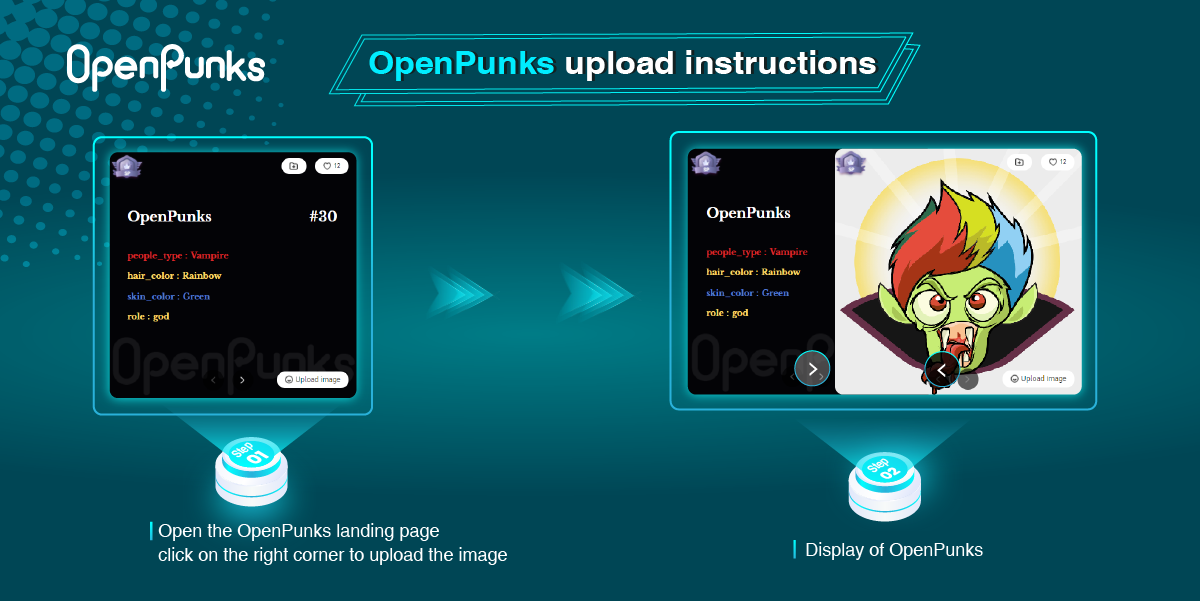 
Activity 1: Participate in the OpenPunks image collection to win a share of $2000 US dollars

After the upload of the OpenPunks image is completed, you can participate in the “likes-collecting” event. Participants will share a reward worth$2,000 in tokens according to the following rules; Creators of OpenPunks who upload an image and rank in the top 20 for collecting likes will win rewards based on the number of likes received.

During the event, the OpenPunks held by users might be given officially designated "lucky attributes" which could entitle them to additional rewards.

The above content "Character Type-Ape", "Hair Color-Orange Red", "Skin Color-Black", "Character-Superman" are the lucky attributes of this event. Based on the attached attributes of OpenPunks you hold, the reward rules are as follows:

3rd level: Collect all four lucky attributes and rewards obtained from Activity 1 will be doubled.


Example: During the event, Tom bought three OpenPunks through mystery box purchases. His first NFT has one attribute "People_type—Ape", the second NFT has “Hair_color—Orange ”. ", the third NFT has the attribute of "Role—Superman". It is confirmed that three of the attributes have been successfully collected, and the rewards will be issued according to the second level.

1. The image uploaded on the first activity must be an original NFT. If it is found to be a non-original piece of work, Gate.io reserves the right to cancel its qualification to participate in the activity.

3. Gate.io retains the final interpretation to this event.

Gate.io is a Cryptocurrency Trading Platform Since 2013